The severe acute syndrome coronavirus 2 (SARS-CoV-2) infection that is the cause of the ongoing COVID-19 pandemic is known to have a more significant impact on older adults leading to higher mortality, increased hospitalizations, prolonged disease, and delayed viral clearance.

Currently, vaccination is the most effective precautionary measure for the severe symptomatology caused by SARS-CoV-2, especially for the elderly population. The BNT162b2 mRNA vaccine (Biotech/Pfizer) has been shown to have high safety and efficacy against serious SARS-CoV-2 infections. Double doses of this vaccine induced a robust humoral response due to the production of neutralizing antibodies. Additionally, SARS-CoV-2 S-specific CD4+ and CD8+ T cell responses have also been observed following vaccination with the BNT162b2 vaccine.

Although the BNT162b2 vaccine was found to be quite effective, lower effectiveness was observed in the case of older adults infected by

The study involved a total of 54 participants who were vaccinated with the BNT162b2 mRNA vaccine. Participants were excluded if they were diagnosed with dementia, had active infections, or were hospitalized during the last six months before the study. In addition, participants with a positive SARS-CoV-2 specific PCR test and those with detectable anti-SARS-CoV-2 antibodies before vaccination were also excluded from the study. The participants taking part in the study were categorized into young (less than 60 years) and old (60 years or above) subjects.

Peripheral blood samples were collected from the patients from February to November 2021. The innate and adaptive immunity was studied at three-time points, before the administration of the first dose (PRE), three weeks after the first dose, just before the administration of the second dose (1D), and two months after the second dose (2D). 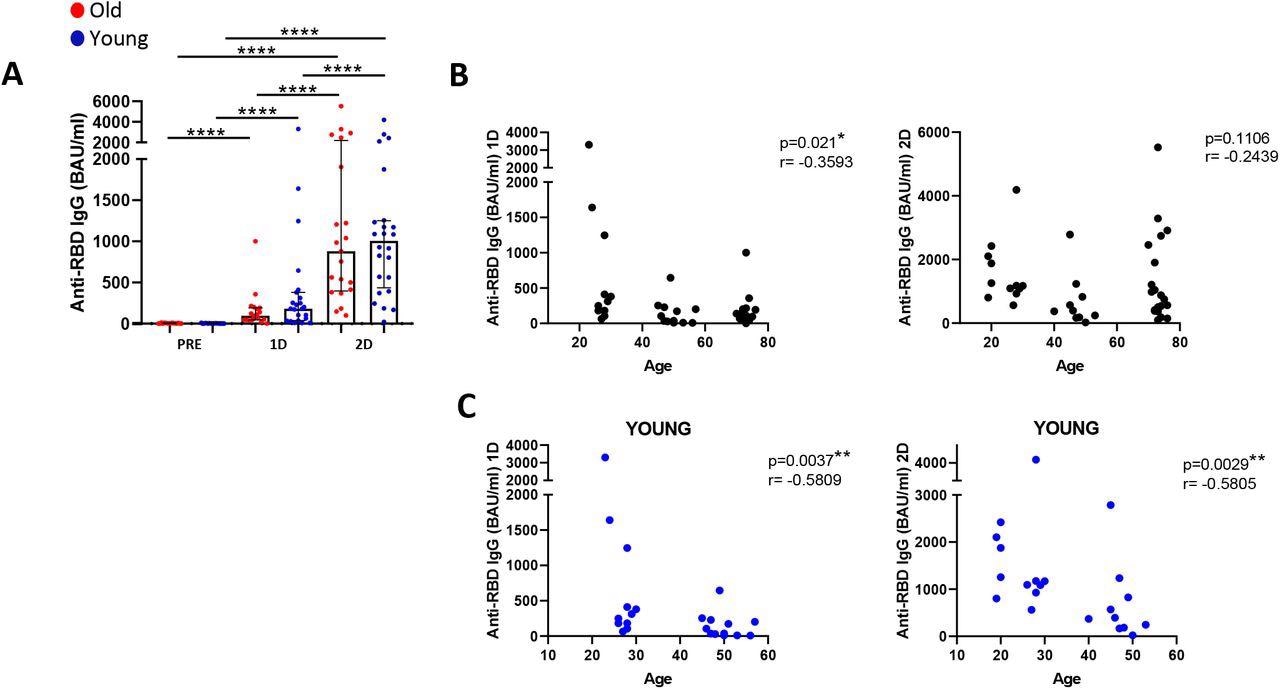 Furthermore, a decrease in plasmacytoid dendritic cells (pDCs) two months after administering the second dose of the vaccine was observed. Upon stimulation of pDCs, lower levels of IFNα production were observed in the case of older adults as compared to young ones after both doses of vaccine. Characterization of myeloid dendritic cells (mDCs) including CD1c+, CD16+ and CD141+ mDCs was also carried out. Higher levels of CD16+ and CD1c+ were observed in young people as compared to the older adults while no difference in the level of CD141+ was observed for both groups.

Finally, the results also reported an increase in the expression of activation markers in classical and intermediate monocytes upon vaccination in young people as compared to older participants. A decrease in classical monocytes following two vaccine doses has been observed only in older participants. Also, upon LPS stimulation, older people were found to produce higher levels of proinflammatory cytokines. Additionally, participants who did not show a cytotoxic SARS-CoV-2 specific T cell response (PRF-) were observed to produce higher levels of inflammatory cytokines by monocytes post-vaccination.

Therefore, the current study demonstrates the age-related immune deficits that exist in older adults. Furthermore, the results of the study provide a better understanding of why the vaccine responsiveness against SARS-CoV-2 is lower in older individuals, which can help in the improvement of current vaccination strategies as well as help to develop more efficient prototypes for the general population.

The study had certain limitations. First, the sample size for the study was small. Second, a longer follow-up could be helpful in the determination of the impact of vaccination. Finally, a response against only the BNT162b2 mRNA vaccine was included in the study.

medRxiv publishes preliminary scientific reports that are not peer-reviewed and, therefore, should not be regarded as conclusive, guide clinical practice/health-related behavior, or treated as established information.

To Supplement or Not? Understanding the Benefits and Dangers

To Supplement or Not? Understanding the Benefits and Dangers

What Are the Best Probiotic Strains?

Apple may release iPad with Samsung-produced OLED in 2024

Logitech G604 LightSpeed is down to just $45

How To Find The Best Student Loans And Rates