What bats can teach us about developing immunity to Covid-19

Viruses love bats. The flying nocturnal mammals make outstanding hosts because — just like people — they live in large, dense groups, their air travel spreads germs between populations and their longevity enables a virus to persist for years in an individual animal.

The big difference is that bats’ remarkable immune system tames and tolerates many viruses that cause havoc when they spread to humans, including the coronavirus responsible for Covid-19.

“We should look at what bats are doing to control the virus and emulate that in some way,” says Bernard Crespi, professor of evolutionary biology at Simon Fraser University in Canada, one of a growing group of scientists finding clues to the pandemic through bat immunology.

Immunology lies at the heart of scientific and medical investigation of Covid-19. Every effort to explain the extraordinarily varied course of the disease, to treat it with drugs and prevent it with vaccines, depends on understanding how the virus outwits the human immune system — or vice versa.

In the popular imagination “immunity” means resistance to a disease, while to scientists it is something much more nuanced and complex. Immunologists think of it more as a question of degree — how rapid was an individual’s initial response to a pathogen? Did their cells recognise it from past exposure and kick into action more quickly? How many antibodies did it produce and were they the right ones?

Coronaviruses have been evolving in bats for thousands or millions of years. They have moved into people very recently — perhaps as recently as last year in the case of Sars-Cov-2, the virus responsible for Covid-19.

A larger number of dangerous “zoonotic” diseases have spread to humans from bats, often via an intermediate animal host, than from all other mammals put together. This roll-call of vicious viruses includes Ebola, Marburg and Nipah as well as coronaviruses that caused Sars, Mers and now Covid-19.

“Viruses are much more virulent when they spread to humans from bats than from other mammals,” says Prof Crespi. “Yet they seem to do little harm to the bats themselves.”

The explanation lies in the way these flying mammals control infections. The biggest differences from other animals are in the “innate immune system”, the first line of defence against invading pathogens, says Catherine Blish, a viral immunologist at Stanford University. In particular, bats produce larger amounts of interferons, molecules that play a key role in activating the wider immune response and in preventing the virus from replicating.

Coronaviruses such as Sars-Cov-2 evolved to spread and thrive in bats by subverting interferons, says Prof Crespi: “The virus is carrying out a stealth attack, switching off the systems that the body uses to show that it is infected.”

Bat-derived viruses are also unperturbed by another aspect of the human innate response — developing a fever to make the body less hospitable to germs. “The incredible exertion of flying causes bats’ body temperature to rise to a high fever twice a day, something that pathogens that have co-evolved with bats for millennia have grown accustomed to,” says Professor Andrew Cunningham of London’s Institute of Zoology.

Recent research suggests that in many seriously ill Covid-19 patients, the virus causes their immune responses to mistime and then go berserk. The body responds too late to the infection, unleashing an indiscriminate barrage of interferons and other immune signalling molecules called cytokines. This “cytokine storm” activates an excessive inflammatory response, flooding the patient with antibodies and blood cells that destroy human tissues without stopping the infection.

Interferons were hailed as potential “wonder drugs” in the 1970s and 80s. They have not lived up to that billing, though they are an important treatment for multiple sclerosis. But some believe their role in modulating the immune system could be important in the fight against Covid-19.

Synairgen, a spinout company from the UK’s Southampton University, announced on July 20 that its inhaled beta interferon greatly reduced the risk of severe lung disease in Covid-19 patients who were admitted to hospital.

Stephen Holgate, co-founder of Synairgen and professor of immunopharmacology at Southampton, says the interferon seemed to act in time to prevent patients’ immune systems going into harmful overdrive. The company is undertaking a second clinical trial to find out whether earlier inhalation of interferon would prevent hospitalisation.

When innate immunity, the initial defence against infection, is working properly — as it does in most people infected with Sars-Cov-2 who develop mild or no symptoms of disease — the second stage, adaptive immunity, kicks in after a few days.

Adaptive immunity is the part of the system that has received most attention during the pandemic. It includes T-cells, B-cells and the antibodies they produce. All have evolved to search out and destroy specific antigens — protein molecules on invading pathogens — and remember these in case of future infection.

While the adaptive immune system is at work, messenger cells and chemicals rush to areas of the body where these specialised blood cells are stored and warn them about the arrival of a virus. A few of these cells may already be programmed to attack the virus and, if they are present, they will reproduce rapidly and launch an offensive.

Danny Altmann, professor of immunology at Imperial College London, says Covid-19 has produced the highest ever level of public interest in his field of adaptive immunity. Only the emergence of Aids in the 1980s came close.

The parts of T- and B-cells that recognise antigens and latch on to the virus are their receptors. “We have made a phenomenal genetic investment in being able to produce a vast number of different receptors for recognising different pathogens,” says Prof Altmann.

Scientists are beginning to study the almost miraculous diversity of immune cells generated by a process of genetic recombination called V(D)J in which the body joins together three different components to make receptors that can tackle new pathogens.

This can produce billions of differently shaped receptors. Each individual is likely to have between 10m and 100m different T- and B-cells, depending on the condition of his or her immune system and how many antigens he or she has encountered through life.

“When you are exposed to a virus, your immune system selects the arrangements that can best deal with the infection, copies them and expands these clones very rapidly,” says Professor Felix Breden of Canada’s Simon Fraser University.

He is scientific manager of iReceptor+, an international consortium funded by the EU and Canada that is building a genetic database of immune cell receptors from Covid-19 patients. It already contains 200m DNA sequences provided by seven research teams in different countries.

Adaptive Biotechnologies, a Seattle-based company, has developed a similar open database in partnership with Microsoft, called ImmuneCode, which has mapped the response of T-cells from 1,000 Covid-19 patients to specific antigens on Sars-Cov-2.

“Looking at the response to Sars-Cov-2, you find what we call ‘public’ receptors with genetic sequences shared by many people and ‘private’ ones that are seen infrequently,” says Lance Baldo, chief medical officer of Adaptive Biotechnologies.

“We are beginning to see patterns in the data,” adds Prof Baldo. “Data sharing will greatly accelerate research into anti-Covid therapeutics and vaccines. If you are developing a vaccine, you want it to produce immune cells with genetic sequences that show up in as many Covid-19 patients as possible.”

Within an infected individual “it takes time to build up B- and T-cell division and antibody production”, says Prof Altmann. “To achieve the full immune response to Covid-19 you need to get to day 11 or 12 after infection.”

After that, the big question is how long the immune response will protect against further exposure to the virus. Following several unconfirmed reports of reinfection with Sars-Cov-2, the first proven case was published last month by researchers at the University of Hong Kong.

A 33-year-old man, who had been in hospital with moderate Covid-19 symptoms in Hong Kong in March, tested positive again in August when he was screened at the airport on returning from a trip to Spain. The scientists proved that he had been reinfected, rather than the coronavirus remaining in his body, by taking genetic fingerprints on each occasion. These showed that the second virus had 24 differences from the first — more than could have occurred through mutations while hanging on within one individual.

Immunologists were not surprised by the reinfection news and expect further cases to be confirmed in the months to come. They were reassured that the man showed no symptoms of disease on the second occasion, suggesting that his immune system — primed by the first infection — had controlled the virus more successfully when it met it again.

It may not be necessary even to have encountered Sars-Cov-2 for the adaptive immune system to offer some protection against Covid-19. “One of the biggest surprises is that there seem to be some memory T-cell responses in people who had never been infected with Sars-Cov-2,” says Jennifer Juno, a viral immunologist at the University of Melbourne.

This “cross-reactivity” occurs because related coronaviruses, which have been circulating in people for centuries or millennia and very rarely cause illness worse than a common cold, are similar enough to recognise Sars-Cov-2. But there is not enough evidence yet to assess either the extent of cross-reactivity in populations across the world or the extent to which they might protect against Covid-19.

Vaccines are of course a far more systematic and deliberate way to prevent disease from a virus you have not met before. Many companies and countries are racing to develop Covid-19 vaccines, at a total cost running to billions of dollars and dozens are at various stages of clinical testing, though none has yet got far enough to provide clear evidence of safety and efficacy.

A well designed vaccine could provide better immunity than natural infection with the virus, immunologists say, but the first generation of Covid-19 vaccines may only be good enough to ameliorate symptoms rather than prevent infection altogether. 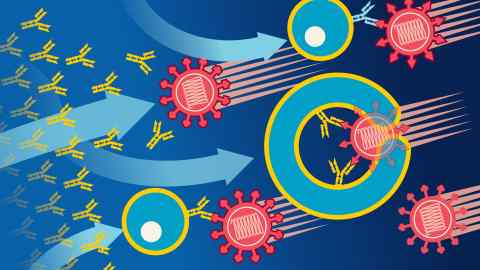 Meanwhile, Sars-Cov-2 is itself evolving as it spreads through its new host: humanity. Coronaviruses mutate more slowly than flu but faster than many other viruses.

Scientists are observing some genetic changes, particularly in the “spike protein” that Sars-Cov-2 uses to enter human cells, which may make it more infectious and at the same time easier for the immune system to recognise and tackle. But none has transformed the nature of the virus.

When a virus crosses the species barrier there is strong Darwinian pressure to adapt to its new environment. Evolutionary theory suggests that viruses do not want to kill their hosts but to spread through them as efficiently as possible while doing little harm, says Gavin Screaton, head of medical sciences at the University of Oxford.

“In the long term they may adapt to the host and become less infectious,” he says. The four coronaviruses that today cause cold-like symptoms may have been more virulent pathogens when they first moved into humans — two from bats and the other two from rodents.

Peter Openshaw, professor of experimental medicine at Imperial College London, says there is much scientific speculation about whether Sars-Cov-2 will “weaken and attenuate into something like the common cold”.

Whatever happens, he adds, “we have an amazing opportunity to watch in real time as a virus evolves after it has jumped species”. Immunologists will learn invaluable lessons from Covid-19 for the inevitable next pandemic following the leap of a lethal virus from a bat (or a rat) into humanity.

What is at stake in the eastern Mediterranean crisis?

What is at stake in the eastern Mediterranean crisis?