US investors pivot to ‘blue wave’ as odds favour Biden

Shifts in markets, from US government bonds to small-cap stocks, suggest investors are starting to prepare for the Democrats to win not just the White House in next month’s election but both houses of Congress as well, in a so-called blue wave.

A few weeks ago, many investors had two key fears. One was that President Donald Trump might fight a defeat at the November 3 election and try to cling on to power if he loses. The other was that a Democratic victory, with the assumed extra regulation, taxes and health spending, would be broadly bad for stocks. But since Joe Biden extended his polling lead after the presidential candidates’ debate on September 29, sentiment has shifted.

This month, investors have rotated towards value stocks and away from the growth companies that have led the market this year. Small-caps, which failed to keep pace with large-caps in the rally since March, have begun to outperform their bigger counterparts. The benchmark S&P 500 index of US stocks has gained 9 per cent since late September. And Treasury bond prices have edged lower as investors prepare for the likelihood of a big fiscal package under a potential Biden administration.

Analysts say these moves suggest that investors think Mr Trump’s presidency is likely coming to an end, and that the Democrats could prove supportive for risky bets.

“A prevailing market narrative a few months ago was that a blue wave election outcome would be negative for equities because it would result in higher corporate taxes and more regulation,” said Solita Marcelli, Americas chief investment officer for UBS Global Wealth Management.

“But in the past two weeks this narrative has completely flipped,” she said. “Biden’s widening lead in the polls and prediction markets, and along with it the likelihood of a blue wave, is reducing election uncertainty. Investors may have initially feared a blue wave, but a delayed or contested election outcome is even more unsettling.”

The election result could still swing either way and markets have a poor record of predicting vote outcomes and their impact, but betting odds now place Mr Biden’s lead over Mr Trump at the widest point since the 2020 contest kicked off this year.

If he did win, and additionally help the party assume control of both houses of Congress, which is far from certain, that would make it easier for Mr Biden to raise corporate taxes, undo Mr Trump’s financial deregulation and support renewable energy — core tenets of his platform.

“If the election were held tomorrow, we think the most likely outcome would be a blue wave,” said David Lebovitz, global market strategist for JPMorgan Asset Management.

A basket of 30 stocks compiled by Strategas Research that would prosper under a sweeping Democratic victory has outperformed its Republican equivalent by 38 per cent this year. The Biden bucket is dominated by solar and utility companies and includes electric car maker Tesla, which has gained about 400 per cent this year.

Meanwhile, the investment house said healthcare would be squeezed by drug pricing pressures, energy would face pain from the green initiatives, and a stricter approach to antitrust would hurt communication services — a group that includes Facebook and Google.

Bank stocks are more tricky for investors to navigate. They could suffer under a tougher regulatory regime from the Democrats. But instead, their share prices have climbed in recent weeks as the former vice-president’s chances of victory have improved. This indicates that the investors think economic growth under a Biden presidency would outweigh regulatory drawbacks.

“All else equal, a blue wave would likely prompt us to upgrade our [US economic growth] forecasts,” Jan Hatzius, analyst at Goldman Sachs, wrote earlier this month. “Our . . . simulations suggest that a blue wave could pull forward the first hike by up to two years, mainly because of the higher inflation path.” 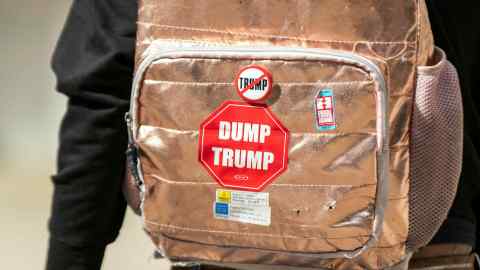 Stimulus aimed at helping small and medium-sized companies would also help small-caps gain ground on large-caps, said Alberto Gallo, head of macro strategies for Algebris Investments. “Democrats could do bottom-up stimulus — they could give money to [small companies], to individuals.”

Municipal bonds could also prosper if Democrats secured both houses under a Biden win, said Elizabeth Young, director of market strategy for BNY Mellon Investment Management. “There would be a lot more federal aid for state and local governments. That is huge for municipal bonds, which I think would rally.”

The recent market moves are “directly related to the policy outcomes under a Democratic sweep being a better possibility at this point”, said Jeff Schulze, investment strategist for ClearBridge Investments. “The markets are starting to price in this new reality.”