Electromagnetic compatibility (EMC) is a system’s ability to work properly without disturbing other equipment or being disturbed by any other equipment. This is easy enough to understand in theory, but more difficult to measure in practice.

Since it is impossible to test all the electronic systems in the world at the same time, we need a standardized method to understand the EMC level of a newly-designed system. This article is the first in a two-part series that explains the main categories of EMC tests—conducted EMC and radiated EMC—and their test setups.

This article, Part One, will review the conducted EMC methods described in the standards CISPR 25 and ISO11452-4. Keep in mind that the methods used in other standards might vary slightly, but the goals of the tests are the same.

What are EMC Regulations?

Test methods are defined as standards recorded in documents that are approved by official administrative bodies. Standards set certain requirements for a test, including for its methods, applicability, setup, and pass criteria, among other things.

You might need to consider a different set of standards depending on the type of product and its sector (for instance, automotive, medical, or military), the country in which it will be used, and the client’s requirements.

There are many organizations in charge of writing EMC standards. In some sectors like automotive, manufacturers have their own standards and require suppliers to pass the generic standards as well as their particular ones.

Here are a few relevant EMC standards based on geographic area:

It is important to remember that EMC standards are live documents—that is, they are continually evolving.

The Purpose of Electromagnetic Compatibility Tests

These tests have two purposes:

Since many pieces of equipment share power cords and communications, it is critical that a newly-designed product does not interfere with others when being connected to the network. This is where standards CISPR 25 and ISO11452-4 are useful. Note that there are some tools used along with many EMC tests, such as stabilization networks or ground planes.

Because a product’s impedance will change depending upon where it is installed, it is necessary to define a uniform method to measure conducted currents. For this reason, and for filtering purposes, a line impedance stabilization network (LISN) is always used.

LISNs offer an external connection for the measurement instrument. They isolate noise so only conducted emissions from the EUT are measured and provide uniform impedance within the measurement range during conducted tests.

Standards are quite strict about their electrical characteristics and dimensions: 0.5 mm thick minimum copper and minimum dimensions of 1 m by 1.5 m. Direct current resistance must be smaller than 2.5 mΩ between any two points. Also, the position of the EUT and the wiring harnesses during the tests are precisely specified.

In conducted emissions tests, the current going out of the EUT is measured. There are usually two methods: the voltage method and the current method. The method described here, based on the CISPR 25 standard, uses a current probe (for the current method). 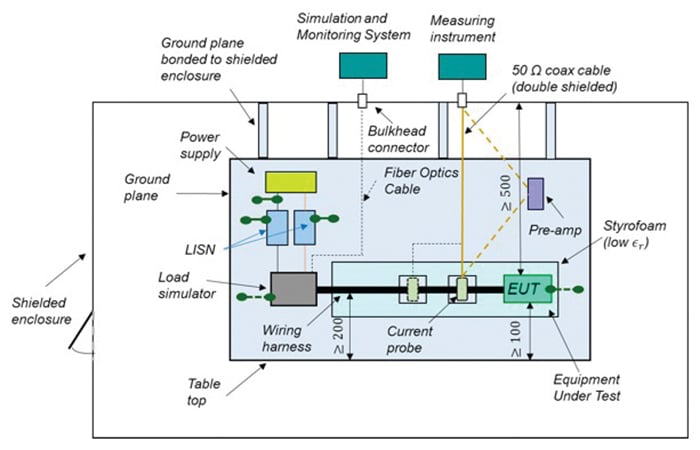 The conducted emissions test is usually performed within the range 150 kHz to 30 MHz, but this range can also be extended depending on the purpose, standard, or manufacturer. Initially, the current probe is placed 0.5 m away from the EUT connector, but to ensure that the maximum current level is well measured, the test is usually conducted 1 m away.

As with all EMC tests, the EUT must be connected to the real system connected in a real environment. If that isn’t possible because the real system is too big or unavailable, a simulated load will excite input and outputs of the EUT, so all the current and voltages expected during normal operation are generated during the tests.

Once the test setup is installed, the measuring instrument—an EMI receiver or a spectrum analyzer capable of performing quasi-peak detection—records the current circulating through the EUT wiring harness through the desired frequency range.

Conducted susceptibility tests are often referred to as bulk current injection (BCI) because this is the most commonly used method. They involve inserting a controlled interference at the EUT wiring harnesses using a current injection probe to check the degree of functionality during and after the tests. 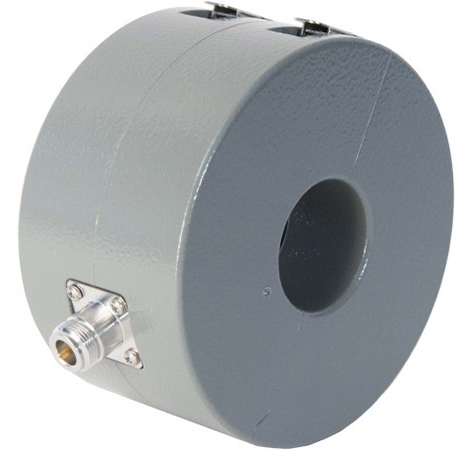 The ISO11452-4 standard specifies two test methods: the substitution method and the closed-loop method with power limitation. In both cases, there are two phases. The first, calibration, controls the current injected at the wiring harness, which is the same for both methods. The other is test execution.

During the calibration phase, the maximum power or current to be applied is determined using a 50Ω calibration fixture. 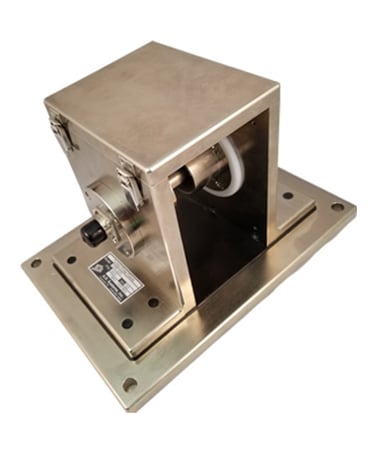 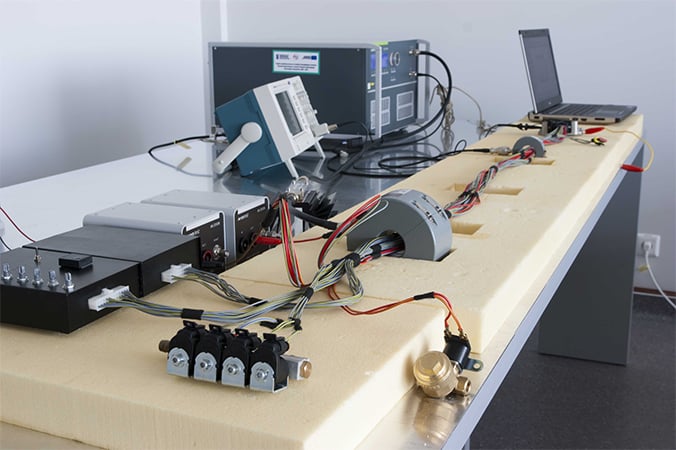 In this case, the current injection probe is placed 900 mm away from the EUT connector while the position of the measurement probe remains the same at 50 mm.

For each frequency within the excited frequency band, the applied power is increased until the power reaches the established limit or the current reaches the test’s upper limit. In both cases, if the EUT malfunctions, both levels will be recorded and its degree of immunity will be determined.

In this article, we have reviewed conducted emissions and susceptibility tests. Both are critical to be sure that a new product can be connected to others without producing nor suffering from interference.

In Part Two, we will review radiated EMC tests. Both types of tests are closely linked; hence, signals detected during one test are likely to appear again during others.

Inside the efforts to sell TikTok as Trump keeps sending contradictory signals, amid shouting matches between Mnuchin and Navarro in the Oval Office (Washington Post)

Texas: Does Biden actually have a shot at winning? The answer is a tossup. – The New York Times