U.S. PMIs, The Recovery Powers On

What’s going to happen next?

In one sense we know what’s going to happen – Americans are going to go to work and make stuff, gain incomes and go and spend them. But we’re interested in slightly more level of detail here in that we’d like to know how many, making and spending how much? At which point we can’t actually know we can only estimate. Or, if you prefer, guess – an estimate being simply an informed one of those.

So, we have to look at the varied information presented to us to see what that educated estimate is going to be. We’ve seen the employment numbers in the last few days and they’re showing that while the recovery continues the speed at which it is doing so is slowing. This isn’t a great surprise as there’s no way any economy can maintain annualised growth rates of 30% a quarter which is what Q3 outturn is likely to be.

One of the indicators we have is the series of purchasing managers indices. These are asking what people are planning to produce by asking what they’re buying now to produce things. As such they’re a reading of current activity but they give us some insight into the future.

There are two sets, one from the Institute of Supply Management, the other from IHS Markit. They do diverge at times but over periods of time they tend to tell the same story. And that for now is of considerable and continuing expansion in the economy.

The September PMI® registered 55.4 percent, down 0.6 percentage point from the August reading of 56 percent.

OK, it’s a little off where it was the month before but that’s still significant growth. Anything above 50 does mean growth even as the lower number itself means the growth isn’t quite as fast as it was.

We also have the much more important services PMI from ISM:

The US economy is only some 10% manufacturing and about 80% services. So, the stronger growth in this sector vastly outweighs the slight slowing in manufacturing growth. 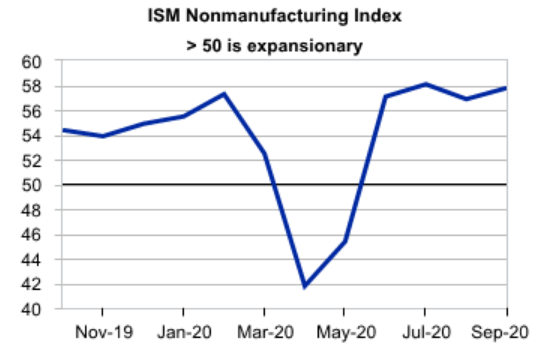 The IHS manufacturing PMI should read exactly the same as the ISM one of course but it never quite does. Sampling differences, simple random variation and so on:

The seasonally adjusted IHS Markit final U.S. Manufacturing Purchasing Managers’ Index™ (PMI™) posted 53.2 in September, broadly in line with 53.1 seen in August, but down slightly from the earlier ‘flash’ reading of 53.5. 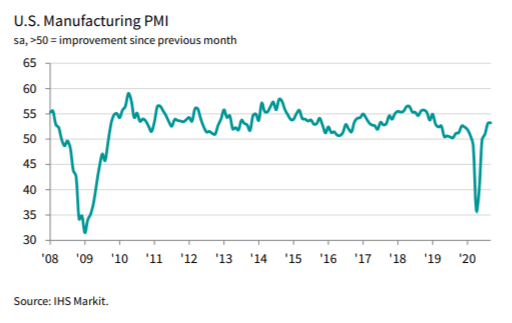 Again, the services number is hugely more important than the manufacturing: 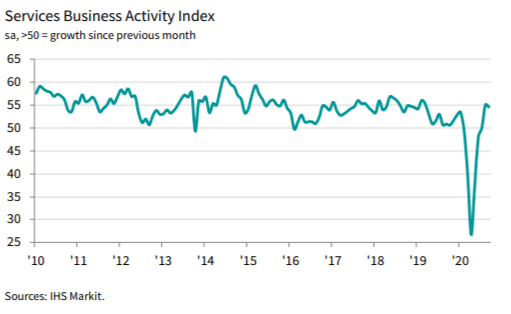 Yes, there’s a little variation there between the IHS and ISM numbers. But no great matter, the differences aren’t large. And all four numbers are showing substantial expansion.

We should recognise that there’s much more international trade in manufacturing than there is in services. So, manufacturing is more influenced by how other countries are doing, services less so. It wouldn’t be correct to take this too far but we can use it as an indication. That services outperforming manufacturing is a signal that the US is outperforming those other nations out there. Something we’re pretty sure we know anyway but still interesting.

As to what this means for the future. We have had those slightly disappointing employment numbers showing that the recovery is slowing. On the other hand that’s a backward looking measure, that’s what happened last month. The PMIs are recording past opinions, yes, but they’re a forward looking measure in that they do attempt to predict. And what they’re predicting is further strong growth.

Which is good of course, we like the idea of the economy recovering. However, what we are interested in as investors is the price of investment opportunities, little else. And here the news isn’t so good. Not that there’s anything wrong with the PMIs or any of the other numbers, it’s just that they don’t provide us with a lot of guidance. They’re just confirming the current conventional wisdom. The recovery continues, in some number of months we’ll be back to where we started in February. At least as far as we can see we’re not stuck in a depression nor are we going to continue to have the speedy growth of the past few months.

Given that this is the current conventional wisdom then of course this is what the stock market indices and other prices for investments are telling us. Known information is already incorporated into prices that is. So confirmation doesn’t change those prices.

So far these macroeconomic indicators are supporting my base case, a swift recovery back to about or a little below before coronavirus GDP and then a slightly longer period of adjustment to deal with things we can’t do the old ways any more. We’ve an awful lot of speculation that this won’t happen but no actual evidence as yet.

As above, confirmation of already extant prices doesn’t really give us a grand dealing plan. It just tells us that we’ve not got to change our views or plans away from that conventional wisdom. Markets are about correctly priced for this continuing recovery. That the recovery continues argues against significant changes in price levels.

Macroeconomics can’t do much more than that sadly. With no likely change in market levels we’re back to trying to spot the specific companies and situations that will outperform the market as a whole.

2021 Cadillac Escalade First Test: Finally What It Should Be