‘They are afraid’: Trump loses edge with seniors in Florida

Election day might be four weeks away, but Barbara Suden, 75, has already voted.

Like many in Florida, a key swing state, Ms Suden cast her ballot early. She said it was an “unbelievably easy” decision to back Joe Biden, the Democratic challenger and former vice-president. “I have an expression, A-B-T: Anybody but Trump.”

Ms Suden and her husband retired 15 years ago and moved from Pennsylvania to Florida, where one in five residents is over 65. The state is a magnet for retirees from the north-east and Midwest, who are drawn by warmer weather and lower taxes.

Seniors are more likely to vote than their younger counterparts, and they have been seen as reliably Republican in recent elections. But opinion polls suggest they are turning against Donald Trump in record numbers because of his handling of coronavirus and his plans to cut benefits such as Social Security.

Republicans and Democrats see pensioners as a crucial voting bloc in Florida, where most recent statewide elections have been decided by a margin of less than a percentage point. In presidential contests, the state is a bellwether of national success: the victor in Florida has gone on to win the White House in 13 out of the past 14 presidential elections.

If the pandemic was taken care of better, we would not have this problem. Yes, we would still have Covid, but it would not be so rampant

Donald Trump handily won Florida seniors in 2016 with exit polls giving him a 17-point advantage among people over 65. He ended up winning the state’s 29 Electoral College votes by a 1.2 point margin.

Mr Trump is himself a septuagenarian who now calls Florida home after he switched his primary residence from New York City last year to Mar-a-Lago, his resort in Palm Beach. But polls show the president is haemorrhaging support among seniors — a shift that could prove decisive in November.

A poll of likely voters in Florida conducted in late August and early September for AARP, the lobbying group for older Americans, showed Mr Biden leading Mr Trump by one point, 49-48, with over-65s.

“I wanted [to vote for] somebody who could be a good role model,” said Ms Suden. “I have seven grandchildren. They watched the debate, and I can tell you I immediately got on the phone and told them that was not the proper way to act.”

She also pointed to the president’s handling of Covid-19 as a key reason for backing Mr Biden, saying she had barely left her house since March.

“If the pandemic was taken care of better, we would not have this problem. Yes, we would still have Covid, but it would not be so rampant,” she said. “I think a lot of seniors feel that way. All of my friends, nobody goes out and does anything. They are afraid to.”

“The president is facing a challenge with older voters due entirely to his handling of Covid,” he said. “They are the most concerned, worried, perturbed . . . his response is giving them pause for voting for him.” 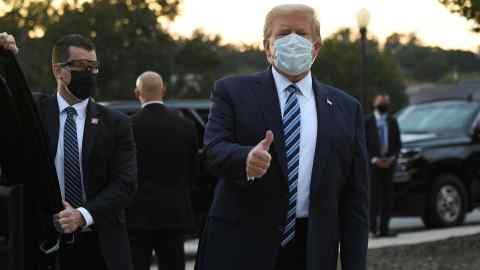 Mr Strimple said Mr Trump’s handling of his own illness was likely to make matters worse, pointing to the president’s decision to ostentatiously remove his mask for the cameras shortly after he was discharged from hospital.

“This carelessness is exactly what caused our country the problem in the first place,” added Mr Strimple. “It reinforces what people think about him.”

Few reputable polls have been conducted since Mr Trump fell ill, but one such survey from CNN this week gave Mr Biden a 16-point lead nationwide. It showed that two-thirds of Americans thought Mr Trump had been irresponsible in the way he handled his own infection.

A University of North Florida poll, conducted after last week’s presidential debate but before Mr Trump revealed his illness, found more than four in five likely Florida voters over the age of 65 thought face masks were an effective method of slowing the spread of the virus.

Florida has recorded more than 716,000 cases of Covid-19 and has the third-highest cases count in the US per 100,000 people, according to a Financial Times analysis of Covid Tracking Project data. Almost 15,000 people in the state have died from the illness, according to the state’s department of health; more than one in three lived or worked in a care home.

“Covid, without a doubt, has been part of this shift [away from Mr Trump],” said Amy Levin, a Democratic pollster at Benenson Strategy Group who conducted the AARP poll with Mr Strimple. “We see [seniors] giving Biden a big advantage on who they trust to protect Americans over 50 . . . from coronavirus.”

Mr Trump still enjoys the support of a sizeable share of seniors, many of them life-long conservatives, such as John Calandro, 74, a retired Nissan executive from Michigan who now lives in The Villages, a large retirement community about 50 miles north-west of Orlando.

Mr Calandro said he believed his neighbours would “continue to be very, very strong supporters of the president”, pointing to outdoor vigils at the weekend, where hundreds of Villages residents prayed for Mr Trump’s recovery.

“The virus has scared a lot of people. But seniors tend to be very aware of the importance of a strong economy,” he added. “Many of us are living off of investments or [retirement plans] we have worked so long and hard to put together so that we can enjoy our life.”

“I am pretty confident that seniors will come back [to Mr Trump] and recognise a strong economy is the best defence for many, many things,” he said.

But strategists warn the president is running out of time to regain his edge with this segment of voters, especially given that many Floridians, such as Ms Suden, have already voted.

“I keep waiting for the dynamic of the presidential race to shift in a way that favours Republicans and the president,” said Mr Strimple. “But . . . there are constant events that bring the president’s actions and words into question.”

Video: US 2020 election: coronavirus and the battleground states