Many traders instinctively view current markets as very odd. COVID drove an incredibly steep dive in prices, followed by a surprisingly strong rebound. Now, fundamentals are terrible, but markets are exuberant. Yet that exuberance is very concentrated in a select group of favored symbols. Stocks and bonds have tended to move in sync, which is odd, and more strangely, stocks have climbed relentlessly while the VIX has remained elevated in the mid-twenties.

Looking deeper one must wonder how much of the increasing valuation across the entire financial complex is driven by Federal Reserve largesse, which raises the obvious question of how that might end badly. Then there is the Softbank influence where massive call buying drove both stocks and VIX higher. Anyone can rationalize the odd market behaviors but navigating them successfully is another story.

As always, I find that the VIX futures complex contains incredibly useful information, so I’ll look at these strange markets through that lens. The next two graphics show the VIX term structure for healthy and stressed markets on the left versus the September 4th anomalous structure on the right.

I’ve written many times about the left graph and how the backwardated term structure (downward sloping) implies risky conditions, while a contango structure (upward sloping) indicates safe, healthy markets. If you were to look up market trends on the dates reflected in the left graph, you’d see that borne out. I should mention that the algorithm is more complicated than simply looking at the shape of the term structure. It incorporates various measurements of how the shape changes and how rapidly, as well as other inter-related variables like the divergence of spot VIX from futures, the volatility of the VIX, and price volatility, among others.

So, back to the right graphic, what would you make of the September 2020 structure? It shows a steep contango leg (Sep-20 to Oct-20 contracts) and a steeply backwardated structure from October forward. That’s an inflected term structure or inflection incorporated in my metrics.

I’ll confess that, when faced with interpreting that September-2020 term structure I hedged my bets by limiting buy-side commitments indicated by the algorithm, choosing instead to play it safer than normal. I measure term-structure inflection by comparing the degree of contango/backwardation in the first leg to that of the subsequent legs; when they are opposite, inflection is high. Concave and convex shapes are treated equally.

Inflection ran at 99%-plus-confidence outliers for a few weeks through September 16th, peaking at an all-time high on September 4th. Those extremes caused me some concern about whether the AI routine could respond with appropriate calibrations of the various model parameters. But with the expiration of the Sep-20 futures contract, the anomaly is largely gone, and I can look back at how the algorithm performed. Will the scrutiny foster greater confidence in future model signals, or confirm my tentative approach to the outlier conditions?

I don’t report current signals, except to members of the Easy VIX marketplace, but today I will discuss very recent signals to illustrate the workings of the algorithm under extreme conditions. Please keep in mind two things: 1) normally sell intervals occur a little less than once per month so the last three weeks are uncommonly active, and 2) lest I take full credit, for the last few weeks, I did sell on the sell signals but have been very careful about any commitments on buy signals. Live and learn.

Remember that September 4th, the first sell signal coincided with the worst-ever inflection in the VIX term structure. It took no courage to sell just before that day’s close, buying would have been another story. By the way, signals typically go out shortly after 3:00 PM ET to facilitate trades before the close, so the closing values are valid representations of actions.

The more complete picture shows that the contango-to-backwardated inflection has been hovering near all-time highs since the August contract expired a month ago. There have been three separate days that tied for the worst inflection ever. 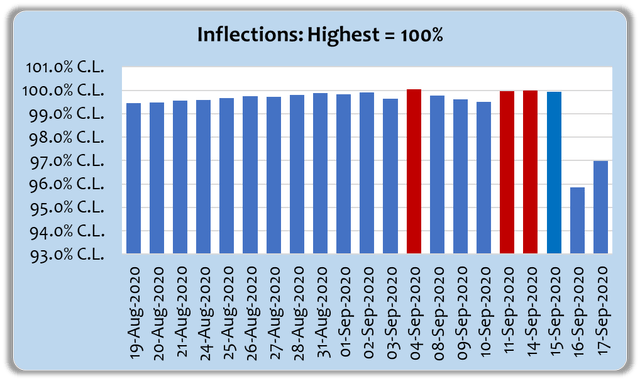 When the September contract expired, the inflection subsided, but just a little. So, all the signals shown earlier were generated in an extremely inflected environment. Looking at the successful pattern of sell-buy-sell signals, I’ve concluded that the algorithm and its trailing optimizations are keeping up beautifully despite the odd patterns of the VIX term structure.

My reticence in acting on the algorithm’s signals recently was a first-time event since the inception of the Easy VIX service. It could well be the last time since the embedded AI routine performed well despite the anomalous environment. I’ve found trading with an unemotional quantitative algorithm can provide outstanding returns, and avoiding the worst drawdowns enables the use of leveraged ETFs without their typical fade or volatility decay; plus higher equity allocations become very acceptable when you can identify risk-off periods before they turn into routs. That matters more than ever in our zero-interest-rate environment.

In earlier articles, I’ve written extensively about the algorithm’s performance characteristics. Today I’ll simply say that since it started, from October 15, 2019 to September 11, 2020, the Easy VIX service has earned accumulated gains using SPY alone of 63.7%. All signals have been documented real time in 200-plus nightly postings and automated dashboards that are refreshed numerous times every trading day. That live-trading period outperformed the SPY-only modeled returns of 22% over the 12 years since May 2008 by well over 200%. COVID has been a scourge, but it’s been a financial success here.

Having said that, the philosophical approach is important. I don’t think of the Easy VIX as a ‘market timing’ tool because the implication creates a false expectation of catching every up-and-down market movement, and that’s impossible. Plus, the benefits of higher equity ratios and the addition of leveraged ETFs can only be realized if the focus emphasizes risk mitigation. So, the Easy VIX algorithm is designed to be a risk-mitigation algorithm where avoiding the big drawdowns lowers risk and creates exceptional returns by harvesting the rebounds. That harvesting starts from an unimpaired investment base, so when markets drop 33% and I avoid it, I begin compounding on a 50% higher base (100 v. 67).

For me, that’s more realistic, and once accepted it makes the inevitable false signals a minor annoyance in the broader context. On average, we only get about 1.5 material wins per year; compared to a simple buy-and-hold strategy, big wins range from 5% to nearly 40% advantages for the most successful sell-buy intervals. Yet disadvantaged intervals are never greater than 5% and net to zero because small wins of less than 5% balance out all loss intervals. But sometimes months go by with nothing to show from the algorithm other than providing the confidence to ride the upward momentum (no small thing) or sometimes a few small, quick sell-buy intervals that average out to nothing gained or lost. Patience is important.

In fact, both patience and confidence are important. With the recent ability to navigate these crazy markets, I now have a bit more of both.

Consider a free trial to the Easy VIX. You’ll get daily signals and automated updates of key metrics. While I benchmark the algorithm to SPY, you’ll see performance of more aggressive portfolios as well, including leveraged ETFs. The full service includes QQQ/SPY/IWM allocation rotations and value-at-risk metrics. The chat room is incredibly robust. In fact, there are now three – one for discussion of signals and implications, one fielding Q&A, and one for any other trading topic that members care to discuss. Returns have been spectacular, and loss intervals small.  Give it a try!

Disclosure: I am/we are long IEF. I wrote this article myself, and it expresses my own opinions. I am not receiving compensation for it (other than from Seeking Alpha). I have no business relationship with any company whose stock is mentioned in this article.

Additional disclosure: I trade a basket of ETFs and any tickers mentioned using the algorithm described as well as other analyses. The algorithm monitors daily performance and periodically recalibrates parameters and triggers in a stepwise sequence. New calibrations are applied prospectively only, and not to the historical period from which they were derived. The algorithm described and the discussions herein are intended to provide a perspective on the probability of outcomes based on historical modeled performance. While I track one or more reference portfolio(s), I make no recommendations as to specific investments. I reserve the right to make changes to the algorithm as I deem appropriate. Neither modeled performance nor past performance are any guarantee of future results.

Wildlife forensics: how a giant pangolin named Ghost could help save the species