These are truly baffling times. Over 25 million Americans are out of work and collecting unemployment insurance. Millions more unemployed workers don’t even qualified for benefits. And millions of gig workers have experienced significant income declines. Yet retail sales in the U.S. are back to their highest levels ever – just months after the retail sectors endured its sharpest decline on record. Overall spending on retail goods and services plunged 22% in just two months – 15% in April alone – as the county went into lockdown. But sales already exceed their pre-pandemic peaks as retailers registered record volumes in August for the third month in a row (Fig. 1).

Retail’s recovery began with a sharp rebound in May as at least some brave souls ventured out from their cocoons to shop, and by June sales were already reaching new peaks. These spending figures obviously have been bolstered by a huge spike in online shopping. But even excluding e-commerce and other non-store sales (e.g., catalog sales), spending at physical retailers is down only 1.3% from its prior peak in January (Fig. 2). 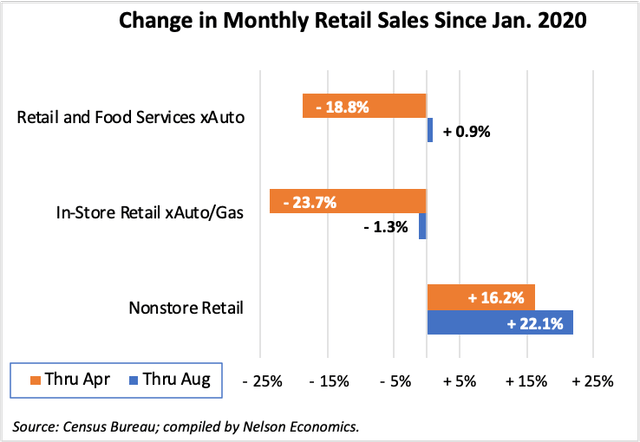 So, while hopes for a quick revival for the economy overall have proven to be unrealistic, one could almost believe that retail’s “V-shaped” sales recovery demonstrates that consumers have already moved beyond COVID-19. But not quite.

An Incomplete Picture: Winners and Losers

A closer look at the sales data reveals that all is not well at the nation’s shopping centers and along our main streets. The picture painted by the broad brush of total retail sales figures obscures the reality that the pandemic is cleaving the retail sector into distinct winners and losers as households make major profound shifts in what, how, and where they buy. More people are buying a lot more online than ever before – not just more stuff overall, but more types of goods (especially groceries and personal care items) and even services (like prepared food and cocktails).

Look for my forthcoming deep dive on the changing nature of e-commerce spending and its impact on physical retailers and malls. But for now I’ll just point out that-contrary to expectations-consumers have not reduced their online shopping as mobility restrictions have eased in recent months: While non-store sales predictably surged during the initial lockdown, with sales up 16% this year through the end of April, e-commerce has continued to increase since, if at a slower pace. Expect e-tailers share of spending to wane once people feel safer resuming their old routines, but not back to pre-pandemic levels. With more consumers introduced to the convenience of buying more products online, much of the shift will endure.

Beyond new ways of shopping, more profound have been the wide-ranging changes in the composition of the household shopping basket (Fig. 3). Confined to our homes, we’re spending more on eating at home and upgrading our houses and gardens, to the benefit of grocers (+9.4% this year) and home improvement stores (+9.8%). On the other hand, restaurants (-16.6%) have been devastated by government restrictions as well as consumer fears of contracting the virus. 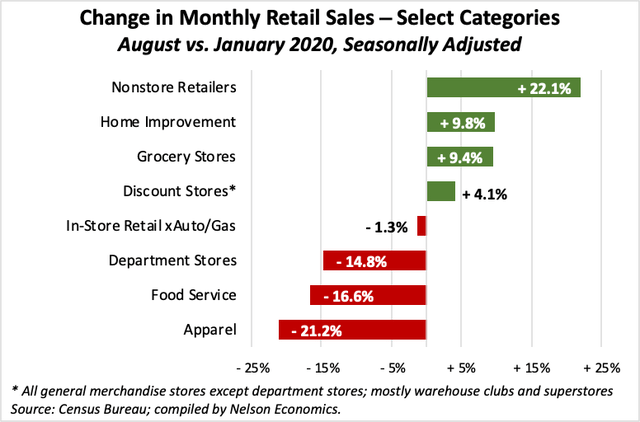 Other clear losers in the pandemic economy have been department stores (-14.8%) and especially apparel stores (-21.2%). Both have been crushed by the fall in socializing and entertainment options, as well as the shift to working from home. With fewer opportunities to dress up, we just don’t need as many new clothes or accessories. All three segments have been hurt by the plunge in travel, as tourists account for a large share of spending. And with so many people out of work, mid-priced retailers also have been hurt by consumers’ need to economize, to the benefit of discount stores (+4.1%), such as warehouse clubs, superstores, and dollar stores.

To be sure, the recovery has begun, even in the most impacted categories: Spending is up materially in restaurants, department stores, and apparel stores compared to the lows reached in April. But as with e-commerce, we should not expect the pendulum to swing back to pre-pandemic volumes, at least until the economy makes a broader recovery, more workers are back at their jobs, and we all feel safe enough to travel, attend a concert, or splurge on a big meal.

And a Distorted Picture: A Rebound Less Than it Seems

Regardless of the distribution of retail sales across different sales categories and channels, the paradox remains: How can total retail spending be back up to record levels exceeding pre-pandemic volumes when so many households are obviously still struggling financially? For comparison, retail sales took two and a half years to return to their pre-recession peak after the Great Financial Recession, and here we are back at a new peak after less than six months.

So how to explain this almost miraculous rebound? I offer three factors. Far and away, the most important reason is the unprecedented level of income support from the federal government. To keep households and business solvent – and ultimately keep consumers spending – Washington enacted an array of programs under the Coronavirus Aid, Relief, and Economic Security (CARES) Act to put cash directly into consumers’ pockets and provide liquidity to small businesses. These included a $1,200 Economic Impact Payment (EIP) per qualified adult and $600 in weekly supplemental unemployment insurance payments through the Federal Pandemic Unemployment Compensation (FPUC) program.

Collectively the Bureau of Economic Analysis (BEA) reports that COVID-related programs accounted for 15% of all personal income in April and still amounted to 8% in July. And unemployment insurance, which pre-COVID typically accounted for 0.2% of personal income, soared to 7% in June. Add it up and the combination of COVID-related federal and state government programs accounted for an astonishing 14% of all income in July, though this support fell by almost half in August with the expiration of some COVID programs.(Fig. 4). 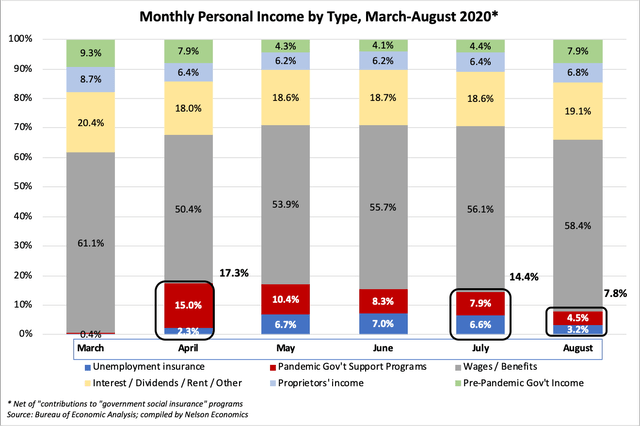 Second, and directly related, CARES didn’t just stabilize aggregate income in the country but actually raised incomes for most Americans. Research from the Becker Friedman Institute at the University of Chicago estimates that two-thirds of unemployed workers eligible for unemployment benefits were able to receive payments exceeding their lost earnings, with a median compensation 34% greater than their prior wage income. And millions more low- and moderate-income households got a meaningful one-time income boost through the EIP payouts.

Flush with this cash, even out-of-work Americans were able to afford groceries and other necessities. But they didn’t spend all of their extra income. On the contrary, people surveyed by the Census Bureau, particularly in more affluent households, typically either saved most of their stimulus payments or used them to pay down debt. With the income saved, many households have been able to maintain their spending even once their unemployment benefits expired.

The final reason consumers could maintain their spending on retail goods and services is by cutting back elsewhere. Retail sales account for less than half of all consumer spending. What else do consumers buy? Housing, utilities, education, most healthcare expenses, travel, and most forms of entertainment, to name some of the biggest non-retail items.

And households have been cutting back on all sorts of expenses. In addition to income support, the CARES Act also provided a temporary eviction moratorium for qualifying renters, while the federal mortgage agencies (Fannie Mae and Freddie Mac) provided mortgage forbearance protection to homeowners. State and local governments enacted their own eviction moratoria. So, many unemployed workers have reduced their housing costs, at least for a while. Despite the pandemic, spending on health care is down because medical providers have sharply reduced discretionary office visits and hospital procedures. Fewer students are attending college and paying tuition. And, of course, travel spending is way, way down.

In sum, I estimate based on BEA figures that total non-retail consumer spending is down 7% this year, while retail sales over the same period were up over 1% (Fig. 5). Thus, households could afford to keep spending on retail goods and services – whether online or at the mall – only by cutting spending elsewhere. 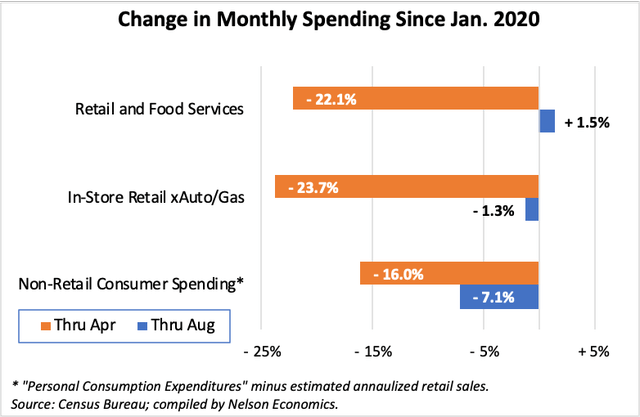 So much about the pandemic and the economic morass that followed has been unprecedented and unpredictable. But here’s a not-so-bold prediction: Retail sales growth will reverse course this autumn, absent another major federal stimulus package. How can we be so sure? By reviewing the same three factors that have supported retail spending through this crisis.

First, the pandemic income support programs are largely gone, and six months after the CARES Act was signed into law, Congress evinces little likelihood of extending, expanding, or replacing the measure. Moreover, unemployment benefits, which typically last for six months, are now ending for unemployed workers who were laid off in March. Many will qualify for extended benefits of up to 26 weeks in most states, but these will expire at the end of the year, as will the CARES program that provides income to self-employed (“gig”) workers. In all, personal income declined by 3% in August as pandemic-related income fell 44% (Fig. 4 above), with further declines certain in the coming months

And more job cuts are coming, further eroding household incomes. The Payroll Protection Program (PPP) – which kept countless small businesses afloat and enabled them to retain their workers – ended in August. The expiration of this program is certain to trigger numerous more layoffs and convert millions of “temporary” furloughs into permanent job losses. Further, the special bailout program for airlines expired at the end of September, and already several leading carriers have announced major layoffs.

We can also expect significantly more layoffs by state and local governments whose finances have been severely stressed by the pandemic. And layoffs could magnify further if the growing wave of new COVID infections continues to accelerate and triggers another round of lockdowns this fall.

In sum, the end of pandemic income support and the coming wave of additional layoffs will sharply cut consumer income, thereby reducing all types of consumer spending. A study by the National Bureau of Economic Research concluded that eliminating the $600 supplement alone would cause a 44% decline in local spending. Even if the FPUC supplement is reduced by just $200, spending would still fall by 12%.

The accumulated savings that households have socked away will help sustain spending for a while but won’t last long. After spiking in April with the massive infusion of government transfers, the personal savings rate has declined each month. As consumers begin to tap into their savings, they inevitably cut back their spending further until their employment prospects improve.

Finally, retail sales will fall because households won’t be able to defer their non-retail spending indefinitely. Importantly, the various housing protection programs only deferred – but did not forgive – rent and mortgage payments. Eventually, the missed payments must be repaid. Nor can medical treatments be delayed forever. Eventually, people will begin to incur more medical expenses.

Taken together, it seems certain that – again, absent additional government interventions – retail sales will soon fall again and remain depressed until the pandemic eases and the economy recovers. And for that we need wide adoption of a safe, effective vaccine. I’m waiting.

Note: A somewhat expanded version of this article with additional charts and data is available on my website at NelsonEconomics.

Disclosure: I/we have no positions in any stocks mentioned, and no plans to initiate any positions within the next 72 hours. I wrote this article myself, and it expresses my own opinions. I am not receiving compensation for it. I have no business relationship with any company whose stock is mentioned in this article.

‘To be near Trump is toxic’: Covid-19, chaos and the election

‘To be near Trump is toxic’: Covid-19, chaos and the election

Brazilian wetlands fires started by humans and worsened by drought