Tencent Music: Is This As Big As It's Going To Get?

Two years into its U.S. IPO, shares of Tencent Music (TME) have failed to inspire any loyalty among investors. Even this year, in a market that has chased up tech stocks (both in the U.S. and overseas), the so-called “Spotify of China” has been unable to generate a sustained rally.

Since July, shares of Tencent Music have dropped a further ~20% (even as the company’s contemporaries among large-cap Chinese internet stocks, like Alibaba (BABA) have continued to rally), suggesting that investors are disappointed with the company’s latest results.

I think Tencent Music’s ills – and the issues that investors are having the hardest time getting past – fall into two main buckets:

The appeal to Tencent Music is easy to understand. All year long, streaming players have benefited from the global pandemic and the surging demand for entertainment: Spotify (SPOT) has risen nearly 70% in the year-to-date. So investors looking for value may naturally turn overseas to a company like Tencent Music, which has seen more modest year-to-date gains and itself covers a very large and hyper-localized market in China.

Given the big question marks over its fundamentals, however – and several indications that Tencent Music may not have much headroom to grow further – I’d err on the side of caution here.

Q2 download: paid users continue to rise, but the overall user base is shrinking 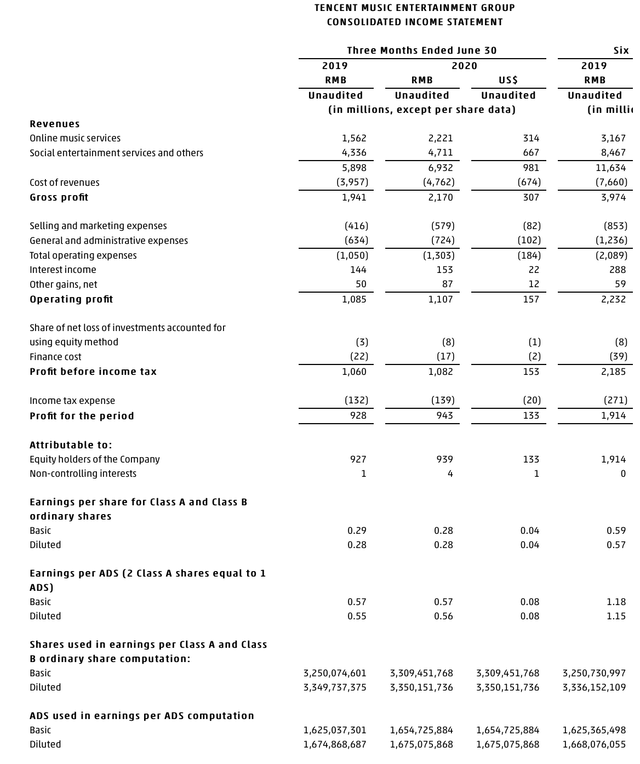 The underlying business trends were a mix of good and bad news:

On the bright side: Tencent continued to grow its paid music users at a rapid clip, up 52% y/y to 47.1 million users, two points faster than the 50% y/y growth rate is achieved in Q1. At the same time, however, the ratio of paid-to-total users at 7.2% is still painfully low compared to brands like Spotify, which as of its most recent quarter had a 45%/55% split between paid and ad-supported users, respectively (and despite their lower mix of the total user base, Spotify Premium users contribute to nearly 95% of the company’s revenue, indicating that free-tier users aren’t that lucrative at all). As previously mentioned, this may indicate that no matter how large of a market China is, the amount of revenue to be had in a country that hasn’t gotten used to paying for music may be more limited.

Second – Tencent’s overall user growth reached a peak in Q1, and in Q2, total music MAUs actually fell by 1 million users, while social entertainment MAUs declined by 2.5% y/y. Again, this may illustrate that Tencent may have reached its saturation point within China’s ~1.4 billion population base, and its market share may be at risk from one of its numerous competitors.

The other big worry for Tencent is that the company can’t seem to find solid footing on the margin front. Tencent’s gross margins in Q3 dipped 160bps from 32.9% in Q2 of last year to 31.3% this year on an IFRS basis. The company blamed its ramp-up on content spending as the major driver here. Cussion Pang, Tencent Music’s CEO, discussed the company’s content strategy on the Q2 earnings call:

We continue to strengthen our content leadership by forming new strategic partnerships with a broad range of music labels, including those in the top, mid-level and long-tail categories, as well as adding various forms of content, including trendy and original music from indie musicians in order to provide the most comprehensive content offering to our users. This ultimately further solidified our content leadership and improved our core competitive strengths […]

Based on our extensive user insights and in-depth knowledge on content, we are proactively adding new verticals in emerging, long-tail and popular genres to provide an even better content offering to our users.

We do have to ask an important question, though: are Tencent Music’s content investments yielding the results we want? After all, the overall MAU base isn’t shrinking anymore. And yes, while much of this content is put behind a paywall and paid users are growing at >50% y/y, the fact that gross margins continue to decline indicates that Tencent Music continues to face a dis-economies of scale problem.

And though Tencent Music is predominantly a music streaming platform, we do note that some of its ancillary products like WeSing are up against stiff competition from much newer and more popular short-form video services like TikTok. The social media landscape has proven to be extremely elastic in terms of demand, and new fads seemingly pop up and take the market by storm overnight. Tencent Music, as a large player with ~650 million MAUs, is now playing defense to retain its market position – and judging by its slight decline in MAUs this quarter, it’s not doing so well on this front.

Tencent Music remains a questionable investment with a shaky growth trajectory. The company likes to stress its rapid growth in paid users, but that >50% y/y growth rate is so high precisely because the base was so small to begin with. Overall MAUs across Tencent Music’s products, meanwhile, are shrinking – or at the very least, no longer growing. Given how fad-driven the social media/internet landscape is, I’d rather not invest in a company that has the responsibility of playing defense.

For a live pulse of how tech stock valuations are moving, as well as exclusive in-depth ideas and direct access to Gary Alexander, consider subscribing to the Daily Tech Download. For as low as $17/month, you’ll get valuation comps updated daily and access to top focus list calls. This newly launched service is offering 30% off for the first 100 subscribers.

Rain can be a great companion. Bluff Mountain, NC, USA.