The Mantra Surf Club launched its rescue operations on Sunday and rescued 60 people,15 dogs and other animals in Dakshina Kannada and Udupi.

As the kayaks and canoes made their way down the winding river in coastal Karnataka, Arjun Achar scanned the waters for signs of trees, streetlights and houses. Under the surface of floodwaters lay paddy fields, roads and drains, unmistakable signs of rural life.

Arjun recalled peering cautiously from his kayak, which was stacked with life jackets, rescue tubes (a floatation device tied around the underarms) and ropes. “We were looking to rescue people stranded by the floods. The houses were spread out so we had to look for them using landmarks,” he says.

Arjun, 27, is a member of the Mantra Surf Club in Mulki, a town located close to the border of Udupi and Dakshina Kannada, two districts of Karnataka rocked by heavy rains and floods this week.

Alongside local fishermen and organised state and national disaster rescue groups, there was an equally significant volunteer rescue effort in villages near Mulki. The volunteer group was set up three years ago by members of the Mantra Surf Club, India’s first surfing destination where many visit for a range of water sports, including kayaking, stand-up paddling and wakeboarding.

Established in 2004 by American surfers Jack Hebner and Rick Perry, the club’s trainees include Ishita Malviya, India’s first professional female surfer and Tanvi Jagdish, who represented India internationally in stand-up paddleboarding. Both Ishita and Tanvi went on to set up surfing centres in Hoode and Malpe in Udupi district respectively.

Though Mulki attracts thousands of surfers every year, when heavy rains flooded villages near the surf club, they put their equipment to a different use — rescuing stranded people in the floods. “By Sunday evening, we rescued 60 people, 15 dogs, eight chickens and two cats I think. We lost count by the end of it,” says Arjun, who was part of the rescue group.

The 12-member group was assembled on Sunday morning after they were contacted by Pradeep Shenoy, a 26-year-old village accountant (a revenue official) in Mulki, who has worked closely with Mantra Surf Club during rescue efforts in the past. Mulki, which is located 24 km from Mangaluru and 31 km from Udupi, reported floods in remote coastal villages following the heavy rains last week.

“There were distress calls from people living in villages close to the Shambhavi and Nandini rivers. I realised that there is a need for multiple rescue groups and messaged members of the Mantra Surf Club to put together a team for rescuing stranded people,” Pradeep says. 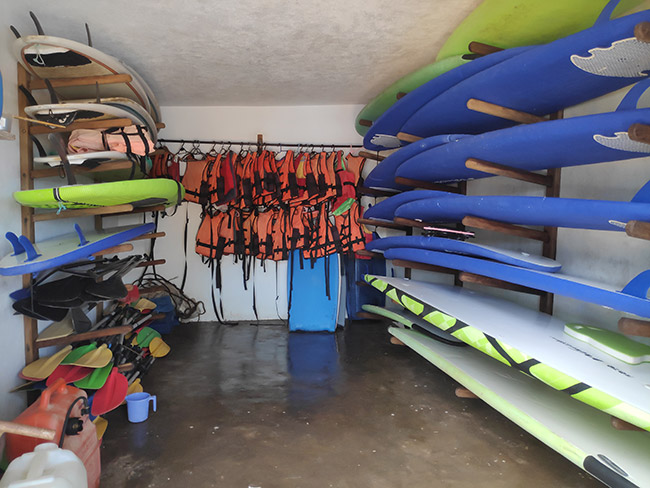 Equipment at the Mantra Surf Club

The message was sent to the group at 7.30 am on Sunday, and within an hour, a rescue group of local volunteers were ready with inflatable zodiacs, kayaks, and canoes, and equipment like life jackets, rescue tubes and ropes. “The village accountant trusted us having worked with us before. He knew that there was no time to lose,” says Arjun.

The rescue group first rowed to Shibaroor and Kelinjur, remote villages on the banks of the Nandini River. “The water had entered people’s houses already and there were a group of five or six families who had packed their luggage waiting to be rescued,” recalls Arjun. 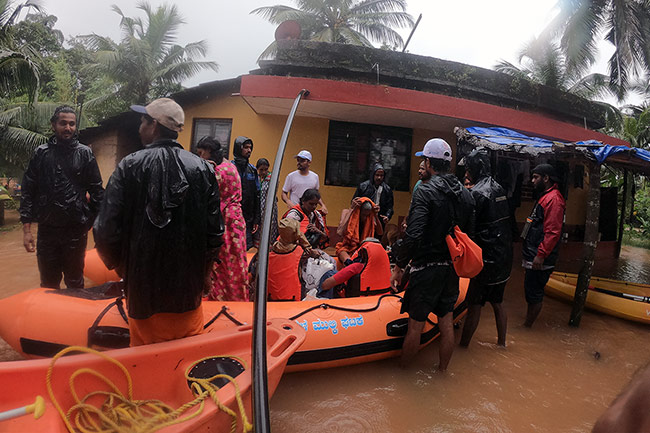 Around 10 am, after the search and rescue of 12 families in Kilenjur and with the steady rain soaking them, the group split into two groups of six members to cope with the rising number of distress calls.

One group led by Kiran Kumar left for Ulepady and Athikaribettu, two villages located close to the Shambhavi River while another team led by Shamanth Kumar headed to two other villages — Shimanthoor and Kilpadi.

“In Athikaribettu, we met a grandmother who could not walk. She was sitting on a wheelchair so we decided that she could not sit on the floor of the raft. We placed a chair on the raft to help her sit as we navigated to safer ground,” says Arjun, who was part of the group led by Kiran.

“She was also in a state of panic and she couldn’t speak at the time. We patiently communicated to her that we are trying to rescue her,” adds Arjun. 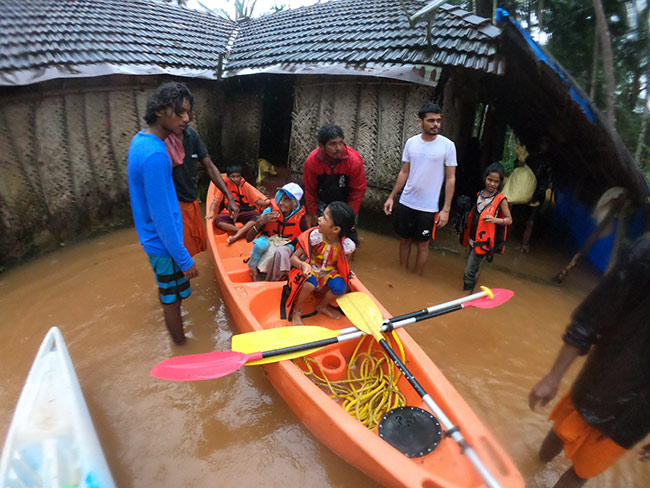 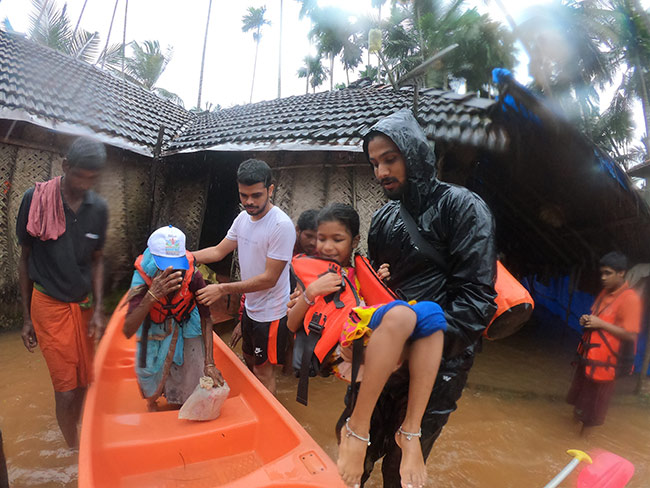 The group continued to work throughout the day on Sunday. Information was limited and continuously changing. It was usually relayed to the rescue group by the village accountant.

“The people we rescued led us to more people in distress. We realised that one of the reasons for the extreme flooding was that the spell of heavy rains occurred during high tide,” says Arjun.

By 6 pm in the evening, 60 people had been rescued to safety by them and the rains in Udupi had receded. “Only when we came back home, we got calls from friends and we saw that the footage we clicked was on the news. Most news reports suggested that coast guards or NDRF did the rescue,” says Shamanth Kumar, who led one of the rescue teams.

Read: Over 2800 rescued after heavy rains cause flooding in Udupi

An improvised but successful response

The rescued families were housed in the relief camps set up in government schools in Udupi and Dakshina Kannada. At the end of the day on Sunday, 36 relief camps housed 1250 people displaced in the two districts. Crucially, no loss of life was reported.

Janardhan Kilenjur, a resident of Kilenjur village recalls how he made a call to the village accountant Pradeep Shenoy asking for help to take his family to safer ground. His family of eight was one of those rescued by the surf club. “At 4 am, water began entering our house and we tied up our belongings in a gunny bag and kept them in the attic. In the morning, we were ready to leave our home but there was no way to get to the road. This group (Mantra Surf Club) of people in boats spotted us. They shifted 10 families in our village including infant children and elderly people to the relief centre in Kilenjur Government Primary School,” Janardhan Kilenjur says. 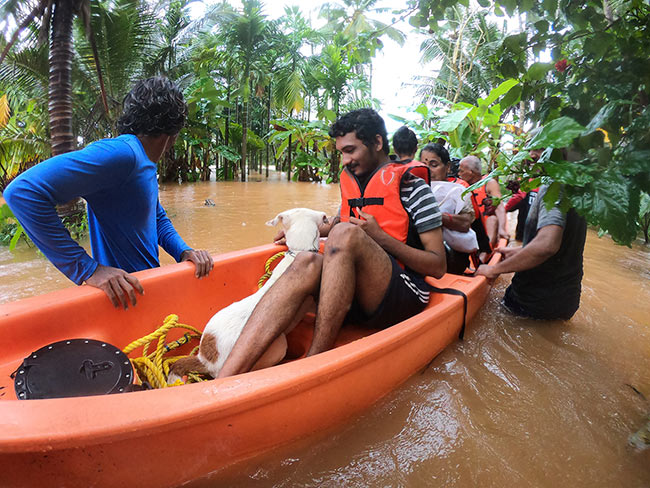 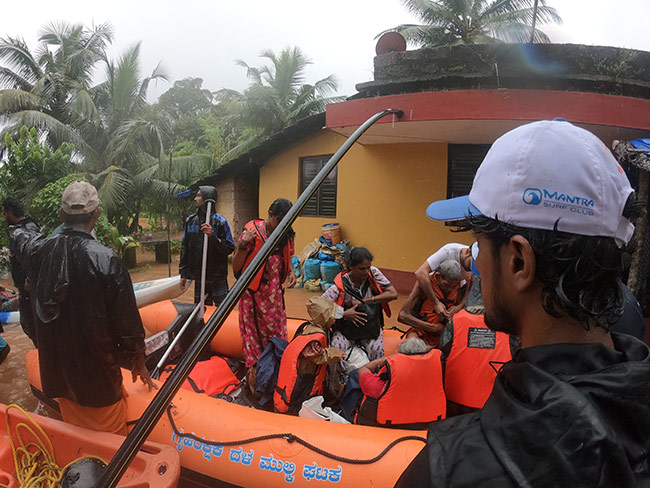 Even though floods are a regular occurrence in coastal villages in Mulki, Janardhan says that the intensity of the floods was not something residents have seen for years. The Indian Meteorological Department (IMD) measured the rains in its observatory station in Panambur, Mangaluru at 180.6 mm on Sunday, which is an all-time record for rainfall in September in the region.

The rescue group’s efforts highlighted how responses to disasters are often improvised. In some places like Nittur in Udupi, local fishermen aided rescue efforts by state and national disaster groups rushed from Mangaluru. “But here in Mulki, we had a group made up of local residents who knew the rivers inside out. Their kayaks and canoes are lighter and faster than traditional fishing boats to manoeuvre the narrow river stretches seen here,” Pradeep Shenoy, the village accountant says.

More than a watersports destination

The coastal Karnataka region has emerged as a surfing and water sports hub and the members of Mantra Surf Club say that water sports enthusiasts can double up as disaster rescue groups. 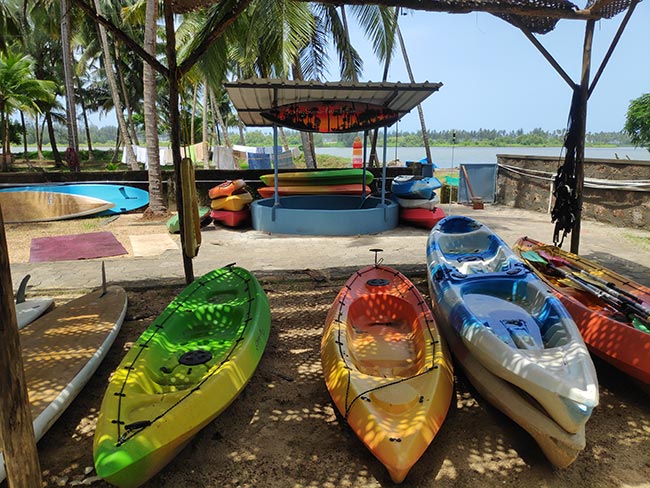 “We may not be guards in uniforms but the locals know us here and we know the waters. Among the places we helped rescue people, official rescue groups were present only in Mattu village. But in the other remote villages, it was just our members coordinating rescue operations,” Shamanth says.

He says that the surf club will now urge the district administrations in Dakshina Kannada and Udupi to train localised rescue groups in each gram panchayat. “During the rescue efforts, a lot of people were curious about us and the work we do. We got some attention on social media too. People were asking us if there is a course they can enroll and train for rescue,” Shamanth says.

“What if the floods happened in many places at once? There is a need for trained local rescue groups. We cannot always depend on the Coast Guard or national disaster forces in situations like this week when lives were at risk. We want to make every gram panchayat here have a rescue group to call upon,” Shamanth adds.