Within weeks, Svetlana Tikhanovskaya has swapped her life as an ordinary Belarusian wife looking after her two children for that of a presidential candidate posing the greatest threat to president Alexander Lukashenko’s 26-year authoritarian rule.

On Thursday, Ms Tikhanovskaya urged more than 63,000 supporters on the streets of Belarus’s capital, Minsk — the largest rally in the country’s history — to help her overthrow Mr Lukashenko in the presidential elections on August 9.

“I don’t need power, but my husband is behind bars. I had to hide my children. I’m sick of putting up with it, keeping quiet, and being afraid,” Ms Tikhanovskaya told the crowd.

Mr Lukashenko has claimed that “foreign puppetmasters” are backing his opponents in an attempt to overthrow him. Ms Tikhanovskaya’s husband, YouTuber Sergei Tikhanovsky, who has been in jail since May, was on Thursday charged with plotting “mass disturbances”. Thirty-three alleged Russian mercenaries were charged with the same offence.

Ms Tikhanovskaya poses a trickier threat to the president. There has been a groundswell of support for the unity campaign she leads together with two other women, which was formed to represent opposition Belarus candidates who have been disqualified from running.

“I’d be very happy to spend time with my family instead of making serious decisions for the benefit of the country. I wouldn’t have to spent time away from my children and worry about how my husband is being treated in prison,” Ms Tikhanovskaya told the Financial Times in an interview this week.

Thursday’s rally was the high point of a campaign tour during which the three women drew crowds of thousands even in rural Belarusian towns. She also excoriated Mr Lukashenko in two taboo-breaking appearances on state television.

A former English teacher and translator with no political experience, Ms Tikhanovskaya said she had benefited from Belarus’s decision to disqualify the three most popular independent candidates, but to let her on the ballot.

“I think they registered me so they could laugh at me. ‘Let’s see if people will go and leave signatures for a woman that nobody in the country knows anything about’.”

She said that by allowing her to stand the authorities had a created a valve for dissent. “We united the three disparate groups of people into one flow, and they’re all going to vote for Tikhanovskaya as the symbol of change, not for president.”

Since 1994, Mr Lukashenko’s authoritarian rule has blended features of Belarus’s Soviet past — such as collective farms, state-run tractor factories and secret police — with a burgeoning tech-savvy middle class. His landslide election victories have been marred by accusations of fraud and crackdowns on protesters, one of which led to EU sanctions from 2010 to 2016.

This year, a change in Russian oil taxation policy in a dispute with Moscow over deeper integration battered Belarus’s sluggish economy. The coronavirus pandemic — which the president, a former collective farm boss, called a “psychosis” that could be cured by driving tractors or mingling with goats — led to more than 67,000 cases in a population of under 10m.

Mr Lukashenko refused to introduce a lockdown, prompting Belarusians to impose their own social-distancing measures and crowdfund to help doctors. The president even claimed some of the 587 coronavirus deaths were caused by lifestyle choices.

“The total lack of reaction to coronavirus was the trigger,” said Valery Tsepkalo, one of the three disqualified election candidates. “People saw how the state is present in every aspect of their lives . . . but he threw up his hands, said it’s your problem, drink some vodka, go to the sauna, drive a tractor, and that’s fighting coronavirus. That boorishness is part of his nature, and it’s what really made people angry.”

Anger over the pandemic fuelled support for Mr Tikhanovsky, who built an audience through a YouTube campaign inviting rural Belarusians to complain about their problems. Supporters brought slippers to Mr Tikhanovsky’s rallies after a remark made in one of the videos by a woman who likened Mr Lukashenko to a fairytale about a “seemingly omnipotent cockroach [who] could simply be smashed”.

After Mr Tikhanovsky’s arrest police claimed to have found $900,000 in cash during a third search of his countryside house, implying he was a foreign agent. Mr Lukashenko then claimed he had thwarted a foreign plot to destabilise Belarus after the arrest in June of Viktor Babariko, another challenger and the former head of Russia-owned Belgazprombank. 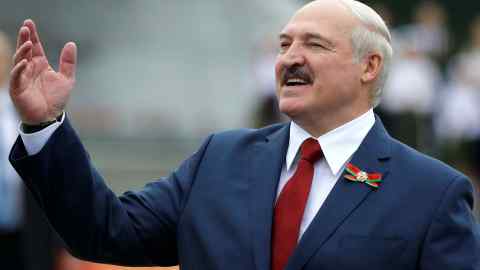 When Ms Tikhanovskaya made it on to the ballot, Mr Tsepkalo’s wife Veronika and Mr Babariko’s campaign manager Maria Kolesnikova joined forces with her, uniting their bases among the rural poor and urban middle class with a call for a fair vote within six months.

“We agreed that she won’t have any political programme except for holding new elections, because if she starts talking about healthcare and education reforms they’ll destroy her immediately,” said Mr Tsepkalo, a former ambassador to the US and figurehead for Belarus’s tech industry who fell out with Mr Lukashenko. “I told her, ‘You need to go into history as Belarus’s Joan of Arc. You’re the flag. You have a simple idea: hold clean elections.’”

The three women’s campaign is a stark contrast to that of Mr Lukashenko, who said “society has not matured enough for a woman” to become president and considered making military service a requirement to run for office, thus limiting it to men.

At rallies, Ms Tsepkalo flashes a peace sign, Ms Tikhanovskaya clenches her fist and Ms Kolesnikova folds her hands into a heart, spawning hand-drawn fan signs and memes likening them to the Power Rangers.

“She’s very inexperienced, but she’s growing very fast and become a much better speaker. You can tell spin-doctors are working with her,” Mr Shraibman said. “But the situation is still very much under government control. She can’t do anything serious to affect it unless she gets tens of thousands of people to demonstrate.”

Her popularity has come at a price. Mr Tsepkalo fled to Moscow last week with his two young sons. He told the FT he was tipped off that security services were planning to arrest him and send his children to a state-run orphanage. Ms Tikhanovskaya also sent her children out of the country following similar threats.

Ms Tikhanovskaya is under no illusions about the challenge of defeating Mr Lukashenko, who has vowed to use the army to crush protests against the result.

“Our people are unarmed and defenceless. They understand that if they take to the streets, they’ll get run over by tanks,” she said. “We don’t want blood. We want the issue to be solved in a peaceful and civilised way through fair elections. Is that so much to ask?”

The day after…. Stocks open higher but move back lower

The day after.... Stocks open higher but move back lower