SocGen: Too Much Uncertainty Despite Cost Savings

Societe Generale (OTCPK:SCGLF) is not only one of the largest European banks but more importantly a globally systemically important bank. It trades on the French equity market Euronext and is also accessible for trading on the American OTC market. The bank trades at one of its lowest valuations, historically speaking, and hit a record low after Q2- earnings were posted. In my opinion, the earnings’ releases are representative of market conditions and warrant caution – especially given the lack of guidance towards dividends/buy backs. In my view, we should witness considerable restructuring going forward to better align the bank’s risk standards with more stable revenue generation, more particularly on the capital market front. While I do think loan losses should normalize after such large reserves in Q2, I am not expecting a material stock recovery this year – especially if economic conditions don’t improve. Considering the headwinds ahead, I assign a neutral recommendation to SocGen.

SocGen reported a €1.26 billion second-quarter loss on August 3rd, which not only highlights how challenging the operating environment has become for the bank but that extended the loss-making quarter realized in the beginning of the year. Year-on-year, the bank faced a 16% drop in revenue driven mostly by the low interest rate environment and business volume that comprised its financial service activities. As opposed to American banks, SocGen was not able to offset that poor commercial banking performance by strong enough investment banking revenues. Fixed income momentum showed positive signals but the equity side of the business is still under heavy pressure – down 80% from a year earlier. SocGen’s historically well performing structured products are also being restructured with €200 to 250mios associated in opportunity costs. 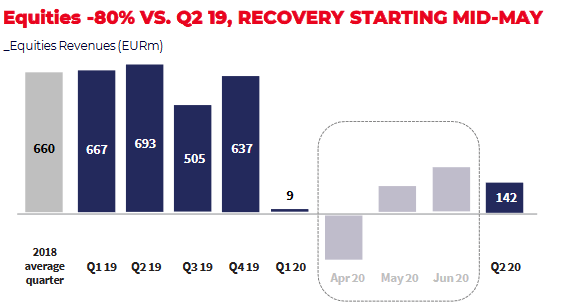 Investors looking to benefit from the low valuations SocGen is currently displaying should be aware of the risks. In my opinion, comforts mostly come from the cost-savings initiatives that – to some extent – paid off. In fact, the bank reduced costs by almost 10% compared with last year and reasserted its target of €16.5 billion in underlying expenses for the full year 2020 (as per earning press release). Against this positive signal, the bank’s profitability remains a challenge. First of all, because it has posted €1.28 billion in new loan loss provisions which reflects methodologic changes but also the economic forecasts associated with the pandemic. This is larger than most peers. Secondly, SocGen faced considerable goodwill impairment in its investment banking division shedding the light on how difficult it is for the bank to rely on capital markets. 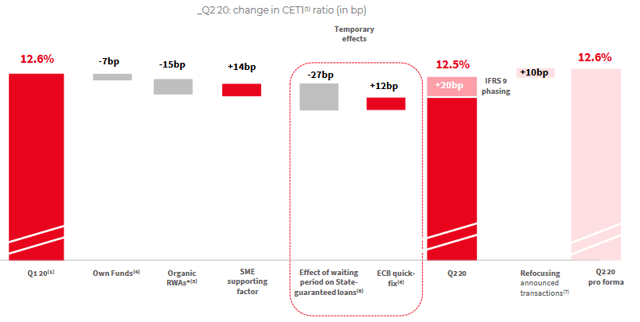 After these Q2-results, I feel there is not enough guidance to be able to predict capital distributions. The bank confirmed its usual dividend payout of 50% of underlying income. Yet, I believe risk-weighted assets are likely to stay high in the second half of the year (credit/market risk trajectory) so that’s a risk to account for. This must be contrasted with the stable CET1 ratio of 12.5% posted and the positive fruits harvested from management focus on efficiency. The bank seems on track in terms of cost targets and predicts CET1 to average 11.5-12% by Q4. I highly doubt we’ll see any dividend increase there. While the bank has a good track record of dividend retention, the payout remains subject to regulatory pressure and economic conditions. Provisions beyond consensus and another round of poor equities revenue could alter capital distributions and that wouldn’t come as a surprise. Speaking of regulatory pressure, the ECB urged banks to delay paying dividends until next year to improve financial strength.

While SocGen has demonstrated proper financial strength historically, I think that by global standards, there are better risk-reward profiles in the banking space. Capital buffers, which look adequate thanks to different entity sales and restructuring in the past year, may not be as easy to contain with provisioning being such a drag. I acknowledge the bank’s liquidity strength and its access to TLTRO programs but revenue forecasts are still a question mark to me. From a valuation perspective, SocGen trades at an attractive 0.2x book value, a common feature among European banks. Still, this is a 43% discount to mean value to be put into perspective with the under-performing EPS growth (-12.58% against -1.29% for industry average).

What We’re Reading: Spy Novels in Asia and the Putin Generation

Five of the Best Classic European Cars to Drive on a Budget of $10,000, or Less