When the coronavirus pandemic started to wreak havoc on the aviation industry, Sara Nelson knew her union needed to move fast to get ahead of the crisis.

Ms Nelson heads the Association of Flight Attendants-CWA, the largest flight attendant union in the US, with 50,000 members spread across 20 airlines. She is the new face of the US labour movement: female, in her 40s and politically progressive. She is widely seen as a contender for the presidency of the AFL-CIO (American Federation of Labor and Congress of Industrial Organizations), a position regarded as the symbolic head of the American labour movement, which has never been held by a woman.

But she has been consumed by the pandemic since it began. The collapse in demand for air travel has endangered the jobs of her union members, plus tens of thousands of other aviation workers. In March, Ms Nelson played a key role in successfully lobbying the US Congress for $25bn in aid to keep pilots and flight attendants on airline payrolls.

She, along with other unions, and airline executives, is at present fighting to extend that aid package for another six months. Without more taxpayer funds, airlines are planning mass furloughs on Thursday, when government restrictions on staffing levels lapse.

Six months ago, the speed of the Covid-19 crisis had left the airline industry reeling. Only a month before airlines and aviation unions were at Capitol Hill pleading for aid, Delta Air Lines had announced record employee profit sharing. But heading the union’s communications team during United Airline’s 2002 bankruptcy had taught Ms Nelson the importance of acting first, rather than reacting to events.

“We knew we had to put forward a plan,” she says. “If you don’t get out in front of the crisis and put forth a plan right away, then you are going to spend the rest of your time responding. People are going to get hurt way more than if you can get ahead of it.”

So Ms Nelson gathered policy experts, including some who had just left Senator Elizabeth Warren’s unsuccessful campaign for the Democratic nomination, to craft an industry aid package that “put workers first”.

Next she secured support from some airlines, whose requests for aid had encountered lawmaker scepticism given their recent share buybacks.

When Congress passed the US Cares Act in late March, it included $50bn for the airline industry. The legislation specified that airlines use half the money to continue to employ workers through to October 1. The package of grants and low-interest loans known as the Payroll Support Program grew from Ms Nelson’s initial plan.

The victory exacted a toll. Ms Nelson’s daily practice during the early stage of the crisis was to grab her laptop upon waking and work straight through the day from bed. Stress and missed meals led to a hospital visit in April. While Congress had already passed the US Cares Act, the union was pressuring the US Treasury to speed disbursements to airlines. Democratic minority leader Senator Chuck Schumer called as medical workers wheeled her into the ER.

“I answered the phone, because it’s Senator Schumer,” she says. “He called to say, ‘Sara, we’ve got these agreements in place, but I don’t want to sign off until I have your sign-off.’ So that’s the last thing I did before they hooked me up to the EKG.”

The collaboration with airlines to push for the law was noteworthy because Ms Nelson, a charismatic speaker, embraces militant rhetoric that US labour leaders have avoided for decades. In 2019, she shot to national attention during the US government shutdown by calling for a general strike — an action considered implausible in the US for decades. Yet five days later air traffic controllers calling in sick led to flight delays at airports along the east coast, and President Donald Trump abruptly agreed to reopen the government.

Ms Nelson downplays the idea of labour and management accomplishing results through improved relations between leaders, the prevailing stance in the US since the 1980s. It takes time and human interaction to build trust with individuals, and that currency evaporates when a new face replaces them.

“Executives come and go through the course of a worker’s career,” she says. “So no matter where you are in that relationship with management, if you are neglecting building that power with workers, you’re really failing at your job. 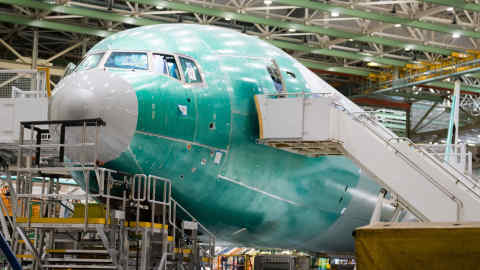 “You have to always be thinking about, ‘What do I need for a strike vote?’” she adds. “You have to constantly be working for that, and if you don’t, then you’re just outsourcing your power.”

The US labour movement, which has been losing members since the mid-1950s, desperately needs rejuvenation. The unionised percentage of the US workforce stood at 10.3 per cent in 2019. Some activists have argued that American workers, pushed to extremity by a pandemic that was preceded by years of job instability and miserable wage gains, are ready for action.

The pandemic has created a shared experience among workers that will never happen again, Ms Nelson says. If the labour movement can bring people together to create demands stemming from their shared experience, a process she compared to the fight for the eight-hour day, “then we can organise in the millions and change policy at the same time”.

Ms Nelson has not said publicly whether she plans to run for the top job at the AFL-CIO, and she notes that the US presidential election is a more immediate priority. In 2016, Hillary Clinton earned 54 per cent of the union vote, compared with Mr Trump’s 39 per cent. Still, her share of union votes was nine percentage points lower than Barack Obama received in 2012. Michigan, Pennsylvania and Wisconsin all have strong labour traditions, and all three were critical to Mr Trump’s 2016 victory.

But in this election union voters will vote Democrat in the same numbers as in the past, or better, Ms Nelson says. The manufacturing jobs that Mr Trump promised would reappear have not materialised, and the last four years have included some high-profile plant closures. In 2019, General Motors shuttered a factory in Lordstown, Ohio that employed 1,600, down from more than 10,000 workers three decades ago.

“There’s a lot of people who have been really screwed,” she says. “People are so clear about how bad this administration has been for working people. Especially people in unions. Especially people who lost their jobs who were told, don’t sell your home, don’t move, you’re going to be fine with me. And then, Lordstown. How’d that work out for them? And the Harley-Davidson plant. Just one example after another.”

Silent witnesses: what do three corpses have to do with a corruption case?

Silent witnesses: what do three corpses have to do with a corruption case?