For those in the Kremlin who have watched in concern as hundreds of thousands of Belarusians demanded the removal of the country’s longtime president this autumn, videos of Kyrgyz protesters breaking into the office of their country’s leader, Sooronbai Jeenbekov, on Monday night and stamping on his official portrait would not have made for comfortable viewing.

The uprising in Kyrgyzstan, as in Belarus a response to claims of rigged elections, joins war between Armenia and Azerbaijan in an explosion of political risk across the former Soviet sphere in recent weeks. This has plunged Moscow’s primary economic and defence alliances into turmoil and raises questions about Russia’s role as the region’s provider of stability.

While not directly linked to each other, the disparate crises in Kyrgyzstan, Armenia and Azerbaijan, and Belarus all bear the scars left by the collapse of the Soviet Union, from authoritarianism and threats to electoral freedom to disputed territories and ethnic divisions.

Each of the three crises raises distinctive concerns for Russia. The Caucasus conflict has seen Turkey, through its support for Azerbaijan, challenge Moscow’s hegemony in the region, and question the Kremlin’s standing as a supreme arbiter.

Mass protests in Belarus — where popular support for president Alexander Lukashenko snapped in August after 26 years in power — have led to questions being asked of Russian president Vladimir Putin’s own reign, months after he changed the constitution to allow him to rule until 2036.

And the ongoing attempt to overthrow Kyrgyzstan’s president by opposition parties, following alleged electoral fraud, has demonstrated the inherent challenges of the so-called managed democracy that Mr Putin has deployed in Russia and seen imitated in many post-Soviet countries.

“Putin’s neighbourhood is suddenly in flames,” a senior western diplomat in Moscow told the Financial Times. “It is hard to see how he will handle this all at once.” 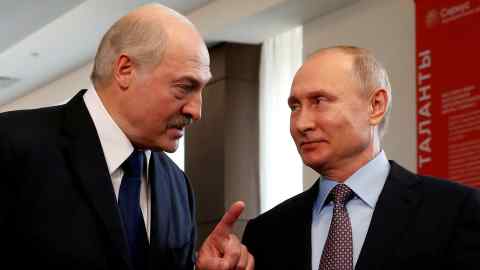 Camilla Ogunbiyi, principal analyst at Verisk Maplecroft, a risk consultancy, said: “Developments in Bishkek demonstrate to leaders across the former Soviet Union that once you extend political freedoms, the people are unlikely to give them up willingly.

“The Kyrgyz protests are therefore likely to make Mr Lukashenko dig in further and reject demands for political rights by the Belarusian people. Equally, they will inspire Belarusian protesters to persist,” she added.

Russia has so far sought to avoid any direct intervention in the three crises, but cannot afford to allow events to spiral out of control.

The country’s foreign ministry on Tuesday said: “Russia is interested in ensuring the internal political stability of Kyrgyzstan — its strategic partner and ally . . . We call on all political forces at this critical moment for the republic to show wisdom and responsibility in order to preserve internal stability and security.”

Moscow has military bases in Armenia, Belarus and Kyrgyzstan and considers itself the pre-eminent foreign partner for each. It has resisted efforts by third parties such as the EU in Belarus and China and the US in Kyrgyzstan to increase their influence.

Belarus, Kyrgyzstan and Armenia are also three of Moscow’s four partners in the Eurasian Economic Union (the other is Kazakhstan), a Russia-led political, economic and trade alliance. They also belong — with Russia, Kazakhstan and Tajikistan — to the Collective Security Treaty Organization, a Nato-like military body that includes a mutual defence pact.

The Kremlin is also caught between intervening to prop up allies at the risk of provoking public backlash, and leaving neighbouring regimes to their fates, risking possible regional contagion and the suggestion of its own weakness.

Footage from Bishkek on Tuesday showing the country’s parliament building flecked with smoke and ransacked by protesters was reminiscent of the White House, Russia’s government headquarters, after the attempted coup against president Boris Yeltsin in 1993 — a memory of a time of political instability before Mr Putin took power.

“All sides in Kyrgyzstan are broadly committed to strong ties with Russia,” said Livia Paggi, partner at GPW, a political risk consultancy. “The Kremlin will therefore be willing to allow domestic developments to play out so long as they do not threaten Moscow’s geopolitical alliance.”

“That said,” she added, “the situation will remain firmly on the Kremlin’s radar given the current heightened level of unrest elsewhere in the post-Soviet space and the potential for further turbulence in the coming month as elections take place in Moldova, Georgia and Tajikistan. The former two are likely to provoke mass protests if contested.”

Elections are also set to take place in January in Kazakhstan, a neighbour of Kyrgyzstan. The polls will be the first since Nursultan Nazarbayev stepped aside after 29 years as president in March last year.

His decision to vacate the presidency but retain key powers as chairman of the country’s security council has been suggested by some analysts as a potential model for Mr Putin, should he wish to step aside.

But Moscow’s unwillingness to help crush opposition to Mr Lukashenko or Mr Jeenbekov “is likely to encourage citizens across the broader CIS region, including in Kazakhstan, as it confirms that the Kremlin is unlikely to overtly and directly throw its weight behind unpopular leaders,” said Ms Ogunbiyi.

“Inspired by the people of Kyrgyzstan and Belarus, Kazakh activists now present their government with the significant challenge of providing an electoral theatre that signals legitimacy,” she added.

My first solo hike, and my first of the 4k footers in New Hampshire! Cannon Mountain in Franconia

How to Travel Safely to Uttarakhand during Covid Times

Airbus converted into Turkey’s largest restaurant up for sale for $1.44 million