Based on RF communication, GPS devices communicates with satellites to determine their location via trilateration. Besides vehicle navigation, if there were ever an application that would benefit from GPS technology, it would marine travel.

In the middle of the ocean, knowing a submarine’s location is absolutely essential. Unfortunately, conventional GPS does not work underwater and alternatives are power-hungry. Now, researchers at MIT may have come up with a solution, offering underwater localization without the need for large amounts of power.

GPS relies on RF communication, which refers to the transmission and reception of EM waves. While RF works just fine in the air, seawater presents a unique challenge because it is a highly conductive medium. The conductive nature of the water means that the medium offers high absorption and subsequently high attenuation, making it completely unfeasible for RF communication.

Instead, acoustics signals are by far the preferred choice for underwater wireless communication and localization. Since sound waves are not EM waves, they don’t suffer from the same high underwater attenuation as RF communication.

Furthermore, particles in water are much more closely packed together than those in air, actually meaning that sound can travel faster in water than air. The caveat to this is that there must be a larger amount of initial energy to start the vibrations.

One of the major concerns of an underwater GPS is acoustic communication because it requires a large amount of power and replacing or recharging batteries in a submarine may not be entirely practical. In an attempt to address this problem, researchers at MIT have announced a new technique that they claim is a step towards battery-free underwater communication.

The working principle of the new technique called underwater backscatter localization (UBL) is that instead of emitting its own acoustic signals, it reflects modulated signals from its environment. 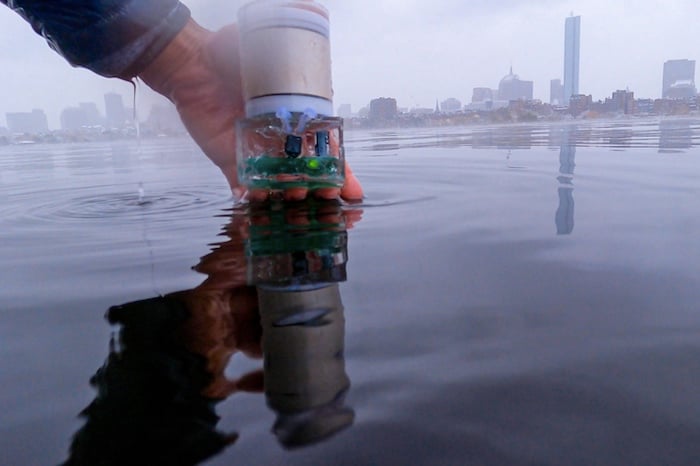 Photograph of the battery-free sensor housed in a polymer capsule to be submerged in the Charles River. Image used courtesy of Reza Ghaffarivardavagh

The technique uses piezoelectric material to generate charge as a result of its interaction with environmental acoustics. Then the material uses that charge to selectively reflect some soundwaves back into the environment.

Learn More About Advances in GPS

The researchers at MIT hope UBL can help fuel a boom in ocean exploration. The idea is that one day, UBL can help autonomous vehicles stay on a grid underwater without expending precious battery power.

Learn more about the history of GPS and modern advances from other All About Circuits articles below.

Dollar swings around as early numbers come in