On September 25th, 2020, Lockheed Martin (LMT) authorized a fourth quarter 2020 dividend of $2.60 per share, an 8.3% increase over the previous dividend. Moreover, the company expanded its share buyback program by $1.3 billion, raising the total authorized to $3 billion.

This represents an increased commitment to distribute cash back to Lockheed Martin shareholders in multiple ways. As of Friday’s close, this brings Lockheed Martin’s forward dividend yield to 2.69%. The share buyback program now represents just under 3% of LMT’s market cap.

These developments extend the tradition of dividend growth, with LMT’s 5 and 10 year dividend CAGR at 10.39% and 14.42% respectively. Over the past 15 years, LMT’s number of shares outstanding has declined by just under 200 million.

Overall, since the mid 2000s I’d say this is a very shareholder friendly company. The question is, will this continue?

I believe Lockheed Martin stock is under pressure because people are concerned that a Joe Biden presidency would lead to China-friendly and globalist policies and a smaller military budget.

To examine this, I’ll first look at history.

The post cold-war period was one in which US military spending as a percent of GDP declined. On a dollar-basis, however, it essentially remained flat from 1990 ($306b) to 2000 ($302b). If you adjust for inflation, this is quite a significant dollar decline in military spending. 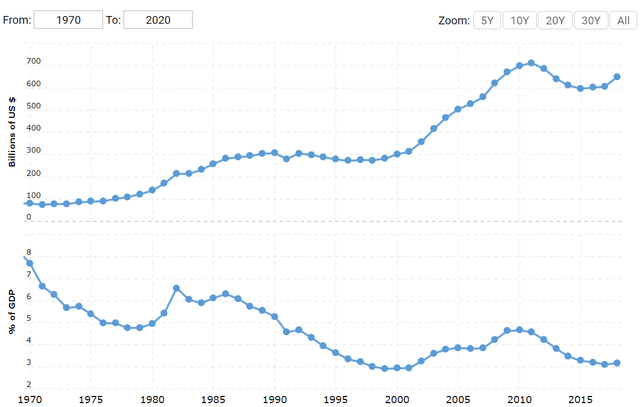 One would naturally think that this post cold-war period would have been one of the worst times to be a Lockheed Martin investor. From January 2, 1990 to December 31, 1999, the stock provided an annualized total return of 10.43% (including reinvested dividends). 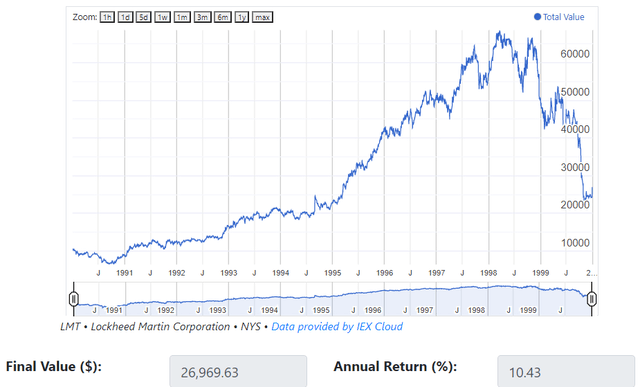 One can conclude that Lockheed Martin stock was affected by the relative decline in military spending after the cold war ended, but this was not fatal to LMT’s stock price.

Could the same thing happen from January 2021 (post inauguration) to January 2031? That’s what many investors seem to be pricing into LMT stock, if Biden wins the Whitehouse, as indicated by the recent flat performance.

Some investors believe US military spending will decline in the future. This clearly poses a risk to defense contractors in general, including Lockheed Martin.

However, I have to disagree with this view. I believe military spending will continue to grow well into the future as 1) America requires a strong military to dominate global geopolitics in order to maintain reserve currency status, and 2) America seeks to contain China’s expansive intentions – both economically and territorially.

This is the one issue that seems to unite Americans, both Republican and Democrat. While some investors expect a Democrat win would lead to cuts in military spending, I don’t believe this to be the case. Indeed, a July 2020 article by The Diplomat outlines Biden’s hardening stance on China:

Over the past year, Biden’s position on China has undergone a tectonic shift as he takes a tougher stance on China’s human rights violation and strategic competition with the United States. Both presidential candidates are looking to make China a central feature of the race.

In general, I believe the tenor of relations with China has shifted significantly as diplomats and politicians increasingly realize that China is playing by its own rules. I don’t see this as a Republican vs. Democrat issue. After all, over the past few decades we’ve had both sides of the aisle try to form a strategic economic relationship with China. Now members of both parties are recognizing the failures of this policy. Some came to the realization sooner than others. But I believe that if there’s one thing Americans now agree on it’s that China is more of a strategic competitor than ally.

During the Democrat presidential primaries, Biden called China’s President Xi Jinping, who is also the general secretary of the Chinese Communist Party (CCP), a “thug” for having “a million Uyghurs in ‘reconstruction camps’ [sic] meaning concentration camps.” Biden also said he had challenged China’s no-fly zone claim by threatening to fly B-1 bombers through it. After Beijing imposed the new national security law in Hong Kong, Biden vowed in a statement to “prohibit U.S. companies from abetting repression and supporting the Chinese Communist Party’s surveillance state” and to “impose swift economic sanctions” should freedom of speech of U.S. citizens and entities be harmed. Also, Biden was one of the first prominent U.S. politicians congratulating Taiwan’s President Tsai Ing-wen on her re-election and inauguration.

In all likelihood, attitudes towards China quickly shifted after China’s response to COVID-19, its hostile takeover of Hong Kong and recent detention of Canadian citizens. I think neither Republicans nor Democrats can afford to be seen as soft on China, because I believe Americans are uniting around the idea that China is a competitor on every front and voters will not accept weakness. A new cold war is brewing.

As President Roosevelt famously said, “speak softly and carry a big stick”. In other words, geopolitics must be backed up by a strong military. With a cold war comes hot investment in military equipment, like the Lockheed Martin F-35 Lightning II and F22 Raptor. Consequently, it is reasonable to assume that military spending will remain strong over the next several years as American seeks to contain China’s expansion. As one of America’s leading defense contractors, Lockheed Martin – in addition to Northrop Grumman (NOC) and Raytheon Technologies (RTX) – should be a chief beneficiary of such spending.

This is all a long way to say that I believe Lockheed Martin will continue to grow revenues – and in turn, cash flows and dividends – over the next several years. Further underscoring this is LMT’s huge $150b order backlog.

Since many investors are underestimating Lockheed Martin’s potential, I believe it is a good value. Currently LMT trades at under 17x forward earnings and at a discount to fair value, based on the following (relatively conservative) assumptions:

– Net working capital of 4.6% of revenues

– Depreciation at 1.9% of revenues 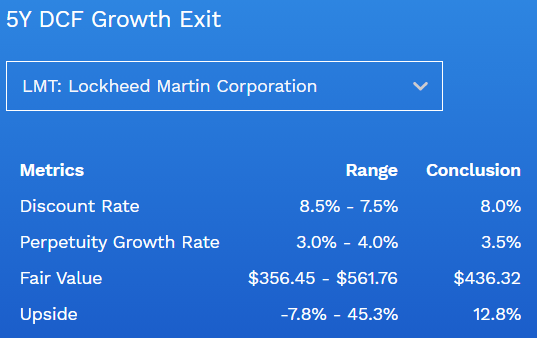 While I concur that there are reasons to be concerned about Lockheed Martin’s future, my opinion is that they have a low probability of materializing. First, as I previously stated, I believe America is growing increasingly united behind a cold war with China, which will result in increased military spending. Second, military posturing in far-away lands requires a strong air presence, which should benefit Lockheed Martin. I think the $150 billion backlog more-or-less supports this view. Consequently, Lockheed Martin is worthy of further investigation by long-term dividend growth investors.

Disclosure: I am/we are long LMT. I wrote this article myself, and it expresses my own opinions. I am not receiving compensation for it (other than from Seeking Alpha). I have no business relationship with any company whose stock is mentioned in this article.

Additional disclosure: This is not advice. Please contact a registered investment professional to discuss your personal financial circumstances. While every effort was made to ensure accuracy, the information in this article contains no warranties with regards to accuracy.

A Closer Look at MARSIS, the Radar that Discovered Lakes on Mars

A Closer Look at MARSIS, the Radar that Discovered Lakes on Mars