Boris Johnson claimed on Friday that Britain would “prosper mightily” even if it failed to agree a trade deal with the EU before the end of the Brexit transition period on December 31, as some Scottish Tories expressed fears that a chaotic exit could further weaken the Union.

Mr Johnson’s allies now increasingly speculate that negotiations with the EU, which reconvene next Tuesday, are heading for failure because of “unrealistic” demands from Brussels.

Downing Street on Friday declined to comment on reports that some Number 10 officials believe chances of a deal are no higher than 30-40 per cent.

But during a visit to Solihull in the West Midlands, Mr Johnson was bullish about Britain being able to cope without an agreement with the EU when the Brexit transition expires at the end of the year.

“We’re ready for any eventuality, of course,” he said. “We will get through this. It’s vital that our partners understand that the UK is going to do what we need to do.”

The prime minister insisted Britain would “prosper mightily one way or another”, saying he was relaxed about the UK trading with the EU like Australia, which has no trade deal with Brussels but hopes to secure one.

Talks have been stalled for weeks, notably on Brussels’ demands that the UK must adopt a robust regime to control state subsidies and avoid unfair competition. Mr Johnson’s chief adviser Dominic Cummings wants the freedom to pump state cash into new tech ventures.

“Our goal remains to reach an agreement and we will work hard to achieve that,” Downing Street said. “We have been clear that there is still a lot of work to be done. We need more realism from the EU.”

The UK’s chief Brexit negotiator David Frost, on Friday played down hopes of a breakthrough in talks next week.

“We will negotiate constructively but the EU’s stance may, realistically, limit the progress we can make next week,” he tweeted.

Although warnings about the danger of talks collapsing are a common feature of most negotiations — especially over Brexit — the tough signals coming out of Mr Johnson’s government are raising concerns among some in the Tory party.

While Douglas Ross, the new Tory leader in Scotland, insists that an EU deal will be struck, some Conservatives fear a no-deal exit will fuel demands for independence in a country that voted 62-38 for Remain.

One senior Scottish Tory MP said it was vital that Britain’s exit from the transition period was smooth. “We have been making that case for some time.”

“Getting a Brexit deal is important for business but even more important for the Union,” said Iain Anderson, executive chairman of the Cicero/AMO consultancy and an influential Scottish Tory. 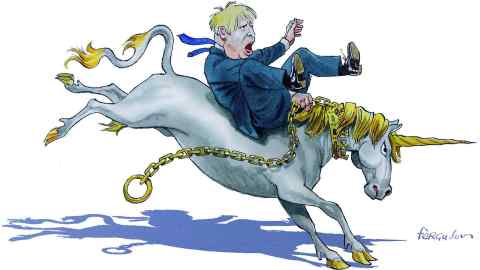 “A deal provides a springboard for the politics of 2021. Both the UK and the Scottish governments know that.”

Mr Ross’s allies say he has not warned Downing Street that failure to reach a deal with Brussels would fuel the Scottish National Party’s demands for independence. One member of the Scottish parliament said there was “zero concern” about a no-deal exit.

Scottish Conservative constitution spokesperson and MSP Dean Lockhart said: “The biggest threat to Scottish jobs and our economic recovery from this pandemic is Nicola Sturgeon’s plans for a separate state.”

But Ruth Davidson, acting leader of the Tory group in the Scottish parliament, said last year she would not support leaving the EU without a deal that helped to “maintain vital trade that flows uninterrupted between Britain and the EU”.

SNP MP Jo Cherry said that if Britain “crashed out without a trade deal” it would further boost demand for a second independence referendum; recent polls have suggested Scots could vote to leave the 313-year-old Union.