On election day this week, Joe Biden returned to his childhood home in the industrial town of Scranton, Pennsylvania, to cap his presidential campaign with a dash of faith and nostalgia.

“From this house to the White House, with the grace of God,” Mr Biden wrote on the living room wall. The message served as a final reminder to voters of his middle-class roots, and proved to be auspicious. On Saturday, Mr Biden became the US president-elect after defeating Donald Trump thanks to voters in three rustbelt states — Pennsylvania, Michigan and Wisconsin — that were lost by Hillary Clinton four years ago.

Mr Biden will be 78 years old when he enters office on January 20, which will make him the oldest US president to hold the job. But he will also break the mould in another way, as an experienced Washington insider of a kind the Oval Office has not accommodated since George HW Bush on the Republican side and Lyndon Johnson for the Democrats.

Not only did Mr Biden serve as Barack Obama’s vice-president for eight years, he was a senator for three decades before that. He is also entering office with more foreign policy expertise than each of his four predecessors.

“We’ve had presidents without a lot of experience and background in Washington, and who didn’t have a strong commitment to the institutions,” said Julian Zelizer, a professor of political history at Princeton University. “This is going to be different . . . and will define at least how he tries to do business.”

Even while serving loyally as Mr Obama’s vice-president, Mr Biden was not afraid to stake out positions at odds with the commander-in-chief. This was particularly so on international affairs, where his long Senate career put him near the centre of the Washington foreign policy establishment — a group Mr Obama held at arm’s length.

And, unlike Mr Obama or Bill Clinton, another Washington outsider who took the White House, Mr Biden’s lengthy tenure in the nation’s capital made him more comfortable with the Democratic party’s traditional constituencies — particularly labour unions. The latter were often targeted by reformers close to presidents Obama and Clinton.

Mr Biden’s political career began early in life, when he climbed the ranks of local politics in Delaware which had become his adoptive, mid-Atlantic state after his family moved there from Scranton when he was 10.

It was also marred by tragedy when, shortly after being elected to his seat in the US Senate aged just 29, Mr Biden’s wife was killed in a car accident along with their young daughter. His two sons survived and he made a point of commuting by train back and forth to the US capital every day for about four hours so he could see them.

“If in six months or so there’s a conflict between my being a good father and being a good senator, which I hope will not occur, we can always get another senator but they can’t get another father,” he said as he was sworn in.

After more than a decade in the Senate, Mr Biden rose to become chairman of the powerful judiciary committee. That put him in the national spotlight overseeing the Supreme Court confirmation hearings of Robert Bork, a Ronald Reagan pick who was eventually blocked.

One of Mr Biden’s biggest regrets from that period — which he later apologised for — involved his role in presiding over the hearings to confirm Clarence Thomas to the Supreme Court. It opened the era of partisan bloodletting as televised entertainment.

Your natural inclination is to want to work with this guy, because of his demeanour, his personality and his reputation, which helps him a lot

The deeply conservative justice selected by George HW Bush received the green light from the upper chamber despite public accusations of sexual harassment made against him by Anita Hill.

In later years, Mr Biden took the gavel of the Senate foreign relations committee, which turned him into a pivotal player in crafting American foreign policy.

Former senators who worked with him say Mr Biden was known for his ability to forge agreements on legislation not only with Democrats but also Republicans, including lawmakers such as John McCain — a skill that might be valuable but hard to replicate in the highly polarised post-Trump days.

“Your natural inclination is to want to work with this guy, because of his demeanour, his personality and his reputation, which helps him a lot,” said Max Baucus, the former Democratic senator from Montana and a former US ambassador to Beijing.

Christopher Putala, a former judiciary committee aide, said Mr Biden had been an “LBJ-level deal-cutter” in the upper chamber on a wide range of issues. He used the skill to great effect for Mr Obama, who was less patient with the backslapping and other political niceties of Capitol Hill.

“The ability to do it on behalf of the executive branch adds just a whole other layer of complexity and depth and familiarity,” Mr Putala said.

As vice-president, Mr Biden implemented the 2009 stimulus deal that helped pull the US out of recession, opposed the president’s troop surge in Afghanistan, and announced that he would support same-sex marriage, even before Mr Obama. 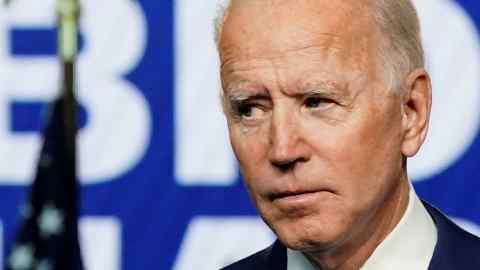 He also negotiated a tax deal with Mitch McConnell, the Republican leader in the Senate, with whom he will probably have to contend again in 2021.

“This is a difficult, raw and angry political time in America,” said Byron Dorgan, the former Democratic senator from North Dakota. “But Joe does have a manner about him that will give people an understanding he wants to bring everybody together . . . [he] would like to try to heal the circumstances of our country.”

Mr Biden had been pining for the presidency for years. He first tried to capture his party’s nomination in 1988 and then again 2008, but was defeated both times. He also considered a run in 2016 but decided against it after the death of his son Beau from brain cancer, paving the way for Hillary Clinton.

Motivated by Mr Trump’s reaction to the deadly white supremacist marches in Charlottesville, Virginia, in 2017, Mr Biden decided to make another run for president.

“In the closing days of the campaign, he kept talking about — ‘I’m a Democrat but I’ll be president for all America’,” said Mr Baucus. “He believes it and he’ll govern that way”.