The purpose of this article is to evaluate the VanEck Vectors High-Yield Municipal Index ETF (HYD) as an investment option at its current market price. Heading in to 2021, I continue to believe municipal bonds will perform modestly well, but I remain committed to investment grade debt, rather than high yield. The Covid-19 pandemic is causing municipalities to face really serious problems, and high yield munis are the most at risk of downgrades or defaults. While there is reward potential if pandemic gets resolved sooner than expected, there is plenty of risk to pursuing this strategy. Further, Illinois’ voters rejected a proposal to improve state finances by raising the state income tax on higher earners, which was a proposal I expected to pass. This puts the state on watch for a credit rating downgrade, which may hurt HYD in the new year. Finally, the fund’s income stream continues to decline year-over-year, which is a trend I do not see abating any time soon.

First, a little about HYD. The fund’s objective is to “track the overall performance of the U.S.-dollar-denominated, high-yield, long-term, tax-exempt bond market”. Currently, the fund is trading at $59.67/share and has a SEC yield of 3.78%. I reviewed HYD about three months ago, and opted to pass on this investment in favor of investment grade munis. I saw frothy markets and multiple headwinds as justification for putting a neutral rating on high-yield munis and, in hindsight, this outlook was vindicated. While the market has moved higher, HYD has seen a negative total return since then:

As we are nearing the end of 2020, I wanted to give this fund another look to see if I should change my outlook going forward. After review, I continue to believe a neutral rating is most appropriate, and I will explain why below.

Welcome To Our 2020 Holiday Gift Guide!

Word Of Caution On Illinois Exposure

To start, I want to highlight an important outcome from Tuesday’s election, which has implications for the high yield muni market. When evaluating HYD, it is important to consider what is going on in Illinois, because this state has the largest weighting within the fund. In fairness, HYD is well diversified, and holds exposure to over two dozen municipalities. However, Illinois stands out, in that it represents 13% of total fund assets, as shown below: 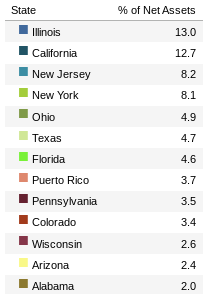 With that in mind, I wanted to highlight the rejection, by state voters, of the initiative to transition to a progressive state income tax. This measure was on the ballot on Tuesday’s election, and it was up to voters to decide if they wanted to move from the current system of a flat state tax of 4.95%, to a progressive tax system that would cap out at 7.5%. This was a measure I personally expected to pass, as the amendment would have only raised taxes on incomes above $250,000, in addition to a corporate tax increase.

However, to my surprise, voters rejected this proposal, despite being backed by the current governor, who spent millions on a campaign to get it passed. In fact, the rejection was substantial, with over 55% voting “No”, as seen below:

My takeaway here is investors need to recognize the risks inherent in Illinois’ debt. The state has been teetering on “junk” status for a while, and the defeat of this proposal certainly has ratings agencies taking another look at the state’s finances. While a downgrade to junk is not a foregone conclusion, if it does happen, it will pressure the underlying value of the bonds within this jurisdiction. There could be forced selling by funds that hold the debt, and it may be more difficult to attract investors who look to the municipal bond sector for safety.

I want to emphasize this point because it does speak to the general mood in Illinois right now. Clearly, there is not an appetite for more taxes, yet the additional revenue is going to have to come from somewhere. While proposals to raise funds passed in many other jurisdictions, tax hikes appear to be less desirable by voters. To put this in perspective, consider that the majority of new bonds, at the state level, have been approved by voters at the ballot box this election season, as shown below:

As a result, Illinois may have to go down the road of borrowing more money, rather than increasing revenues, to shore up short-term fiscal challenges. While this would prevent defaults in the months ahead, the issuance of more bonds could lower the prices of existing securities. This is especially true if investors begin to get concerned about the longer term implications of these sales. All things considered, investors in HYD, and the municipal landscape more broadly, are going to want to keep a keen eye on Illinois in 2021.

My second point has more of a broad macro-view of the economy and market as a whole. As readers are surely aware, the market has been rallying hard since futures trading began late Tuesday night. Investors were pleased with the outcome of the election, even though it has not been finalized yet. At time of writing, it appears Joe Biden will be the next president, but the biggest takeaway was the Republicans will maintain control of the Senate, and Democrats the House of Representatives. The market tends to do well during periods of a divided government, and investors seem to be anticipating a similar outcome this time around as well.

While this is certainly good news in the short-term, I am concerned investors are forgetting the difficult economic reality we currently face. This is true for stocks and bonds, including munis, all of which have been rallying this week. My concern is that the headwinds facing state and local governments, such as heightened unemployment, falling revenues, and stimulus stalemates, have not gone away. In truth, additional stimulus is probably forthcoming, but it may not be immediate. Furthermore, even if the federal government does provide state and local governments with additional funds, that does not “solve” the problem, it only delays it. Until the Covid-19 pandemic is behind us, the revenue problems facing states and cities will remain. Any stimulus money that gets passed in the months ahead will get spent quickly, due to the overwhelming challenges being faced right now. This means the stimulus debate will continue consistently through 2021, until there is more clarity regarding the virus (i.e. stopping the spread, a vaccine, etc.). My point here is investors need to get realistic again about where the economy stands. The situation on the ground is improving, yes, but the current environment is not likely to change before the end of Q1 2021, if not later.

Despite this note of caution, which I feel is very important, I do want to emphasize that I am not “bearish” on high yield munis, or HYD by extension. Personally, I am avoiding this sector and fund, but there is merit to taking on some extra credit risk to earn a higher yield. The fiscal pressures are serious and real, but municipalities do have a strong track of overcoming challenging times. Looking back at the country’s history, defaults among state and local governments are rare. Furthermore, even with the pandemic, 2020 has seen a historically low level of Chapter 9 filings by municipalities, as shown below:

I believe this reality demonstrates there is support for my neutral view. The fiscal problems will take bold solutions to solve, but municipalities have weathered storms before. Ultimately, the sector will survive, but investors need to understand, and be willing to accept, the inherent risks.

My next point takes a look at the income stream, which is certainly an area of importance for muni bond investors. Back in August, I noted how HYD has seen its distribution rate fall, compared to 2019, but it was by a modest amount. I view this as a neutral development because, while the decline is a negative, it was to be expected given the economic climate and low interest rate environment. As the year progress, this trend did continue, as I expected. Unfortunately, the drop in income has accelerated a bit, as shown below:

The takeaway here is that HYD’s non-leveraged yield is certainly attractive on the surface, but investors should consider it will probably continue to fall in the months to come. While it is hard to find a yield near the 4% mark these days, without taking on excessive risk or using leverage, HYD’s distribution trend is weak. As long as this remains the case, I will likely continue to avoid the fund.

My final point touches on the largest sector by weighting within HYD, which is Health Care. It goes without saying, this is a challenging sector given the virus outbreak, and its impact on HYD is significant because the sector represents almost one-fifth of total fund assets: 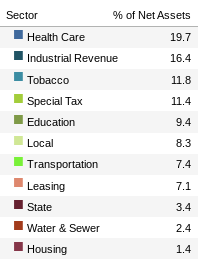 This is important to understand because this sector is vulnerable to an uptick in virus cases, state and local budget constraints, and changes to health care laws. For investors who want a more certain investment environment, this is probably not an area they want to focus on.

However, while Covid-19 will rattle the Health Care sector for the foreseeable future, there is opportunity to investing in to this sector now. With risk, comes opportunity, and hospitals and other medical providers could be primary recipients in another stimulus bill from Washington. A President Biden will apply more pressure to Congress on Health Care related items, and there could be more appetite in the Republican-controlled Senate to pass direct funding to hospitals on the backdrop of the current election. I personally expect the next stimulus package to include meaningful support for our Health Care network, and that could shore up the finances for some of the bond issuers in HYD’s portfolio. For the time being, this is speculative, but if it does materialize, it will be bullish for revenue bonds in the sector.

HYD’s neutral rating has made sense in the last three months, and I expect that rating to make sense for at least the next three. Higher risk bonds, whether in corporates or municipals, are an area investors should approach with caution until the outlook for the pandemic and/or stimulus is clearer. Buying in now does present an opportunity, if conditions improve or stimulus measures exceed expectations. If one or both of those scenarios wind up happening, those taking the risk now will be rewarded. However, the fiscal challenges facing state and local governments are immense, and the downside risk should limit the desirability for risk averse investors. Further, Illinois, which is HYD’s largest individual state by weighting, saw its voters reject an income tax hike. This could have been a tailwind for the state’s municipal bonds, had the proceeds been used to help correct some structural financial issues. Due to the voter’s rejection, the fiscal picture for the state is negative. Therefore, I believe my neutral rating for HYD is well supported, and recommend investors be very selective with new entry points at this time.

Disclosure: I am/we are long NEA, BBN, NBB, MUS. I wrote this article myself, and it expresses my own opinions. I am not receiving compensation for it (other than from Seeking Alpha). I have no business relationship with any company whose stock is mentioned in this article.

Dollar continues to keep firmer on the day, all eyes on the US jobs report later