How to make the hybrid workforce model work

Even before the coronavirus pandemic made homeworking commonplace, Automattic’s 1,277-workforce was entirely remote, with perks that include reimbursing expenses to set up workers’ home offices.

Yet despite its remote ethos, the group, which owns and operates web design company WordPress, does not expect its employees to work in isolation every day. It offers a monthly stipend to be used towards co-working spaces (day passes or ongoing membership) or coffee shops (WiFi costs, coffees). The social highlight of the year is the GM — or Grand Meet-up — where staff from 76 countries speaking 95 different languages, get together for a week of keynote sessions, workshops, team sessions, socialising focused on strategy, learning and team bonding. Employees are encouraged to eat with different colleagues every night to meet people outside their teams.

“It’s still important to meet face-to-face — just not every day, in the same office,” says Megan Marcel, head of global events. The GM is a chance “to get to know the people behind the Slack avatars and build relationships that can carry us through the other 51 weeks of the year.” Coronavirus cancelled this year’s gathering, but the company did hold some virtual sessions. Nonetheless it could not match the GM, which the company will reinstate when travelling is safe.

Automattic’s ideas about social interaction for distributed workforces show one possible blueprint for work in the post-pandemic world. Overnight, lockdowns demonstrated that large swaths of workers could do their jobs at home. The experience has made companies rethink working patterns — yet few are prepared, for now, to recreate Automattic’s remote model. Rather, in an attempt to reduce their office space and accommodate employees’ desire for flexibility, they are mixing remote and office work — or hybrid working.

But a hybrid model brings challenges. Workers currently split between home and office are already finding it can be hard to manage and it reinforces divisions between the in-crowd and at-home crowd. “It’s easier to have a team of 20 all being remote rather than 15 people in a room and five remote. With everyone on an equal footing it’s relatively easy,” says Jesper Frederiksen, UK vice-president of Okta, a software group.

Job van der Voort, co-founder and chief executive of Remote.com, which provides payroll and incentives to distributed workforces, says the hybrid model is the hardest one to achieve and can lead to a two-tier workforce. “The threshold for asking a colleague something when walking by — and not ever documenting it [or] sharing it in a way that becomes accessible to those working remotely is very low.” Moreover, it is easy to grab a drink with a colleague when working together in an office.

Some measures to overcome this might include sending agendas in advance of meetings and inviting written contributions as well as inviting everyone to speak.

Not everyone wants to work at home. Bill Nankivell, chief executive at B+H Architects, says that its Chinese division has been resistant to new working patterns so as an experiment to change culture, the Shanghai office made it mandatory to work from home one day a week. “Ninety per cent saw some element as a benefit. On the other hand, we also learnt that not everyone was comfortable working from home. Living arrangements in major Chinese cities can be cramped.”

It may be unwise to commit to permanent plans about work patterns on current circumstances. After all, notes Monica Parker, founder of Hatch, an analytics company, many countries are still in “a triage phase”. “This isn’t genuine remote working in that it has removed autonomy of choosing when to work from home versus when to work from the office — autonomy being a key success factor to remote working.” 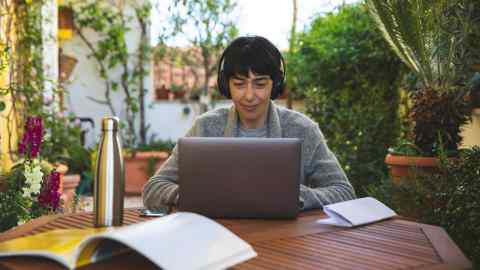 Managers should take advantage where possible to experiment with new work arrangements and assess the impact on employee attitudes and performance. Eric Anicich, assistant professor of management and organisation at the University of Southern California Marshall School of Business, says: “Without data, managers may make inaccurate assumptions about employee preferences and broader policy impact. The goal for organisational leaders should be to determine, but not necessarily be in a rush to implement, the most viable and effective long-term work arrangement.” He advises testing hybrid policies one department at a time and revising them.

Hybrid work models require clarity about job roles to decide which tasks are best suited to home (writing a report) or the office (brainstorming). It is an opportunity for rethinking some of these tasks, Prof Anicich says. He takes the example of a team creating a new advertising campaign. Rather than get a working party together at the start of the project, employees could generate ideas remotely and share them anonymously, reducing the pressure to conform to group think. Later, the team could come together physically to evaluate the pool of ideas.

It also requires greater planning. David D’Souza, membership director at the CIPD, the body for HR professionals, says administrative staff are often the first to be cut in a downturn yet the changing rules on social distancing and workplaces, as well as future hybrid models, demand a great deal of co-ordination between workplace facilities management and human resources. After all, a sparsely populated office might reinforce isolation, reduce serendipitous conversations and risk siloing teams.

Kristi Hummel, senior vice-partner of talent and culture at Dell Technologies, says the company has “amped up our management training” to support flexible work. Hybrid working could transform performance reviews, according to Steve Collinson, UK head of HR for Zurich, the insurance group. “If teams are largely working from home, a very simple way of getting people together is to spread performance discussions [to every month instead of quarterly] to talk about goals.” 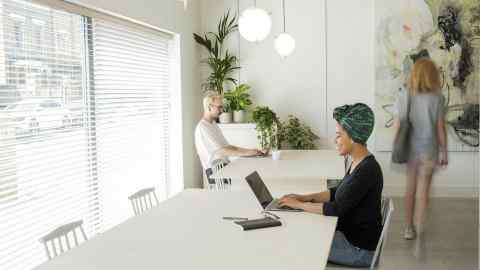 Technology is evolving to support new working methods. Nicole Herskowitz, general manager for Microsoft Teams, says that the company has recently updated its video-conferencing to include speaker attribution to help hybrid working. “If there are five people in the meeting room and five people at home, I might struggle if at home” to know who is talking.

One of the challenges in a hybrid model is socialising, an aspect of corporate life that homeworkers say they miss. Priya Parker, author of The Art of Gathering, says “companies are asking what can we do apart, and what can we do together. [Perhaps] we do our work virtually but do our play together?” Liz Burow, workplace strategy and design researcher, formerly at WeWork, says the danger with focusing on socialising is that it can become stilted rather than serendipitous or conversely make gatherings revolve around happy hours, creating a “bro culture”. “If you are shy and introverted it might be very stressful.” She suggests forging connections through related projects, such as hackathons, which could be held remotely or in-person.

One model that might suit hybrid work is the hub and spoke, whereby a company has a main office and satellite ones, allowing workers to meet up closer to home.

Peter Bacevice, director of research at HLW, a global architecture and design firm, says “neighbourhood hubs” where clusters of employees live would reduce commuting time and “assimilate a cross-section of workers from various roles, giving them a chance to build community based on the common experience of where they live. This would be a great way to break traditional role-based silos.” Another benefit might be to populate unused spaces such as vacant storefronts “bringing new life and new uses to neighbourhoods and street life”.

United Airlines: There Are Easier Ways To Make Money

How democracies can claim back power in the digital world

Silver: Heading Up, As JPMorgan Pays Up