The new M.2 and Mini PCIe AI acceleration modules integrate the Hailo-8 processor and can be utilized in realtime with any edge device.

Hailo’s M.2 AI acceleration module is able to utilize a built-in processor that can analyze models at 26 TOPS while consuming 3 TOPS per watt. Image used courtesy of Hailo

The Purpose of AI Acceleration

AI acceleration refers to hardware that boosts the speed for any machine learning module. Analyzing complex unstructured data such as voice, acoustics, images can be a costly and time-consuming issue developers face in deep neural network environments.

While deep neural networks are essential to analyze unstructured data, these networks have anywhere from 50 to 150 layers with each layer requiring billions of calculations to process. This is where AI accelerators come into play. These modules allow data to be processed, calculated, and analyzed data at faster rates.

Hailo’s AI acceleration modules have some leverage over other competitors because it integrates the Hailo-8 processor—a device that Hailo says delivers 26 tera-operations per second (TOPS) in chip processing capabilities and 3 TOPS per watt in power consumption.

The module can be plugged into any existing edge device with the appropriate M.2 or Mini PCIe sockets to execute real-time deep neural network inferencing. Design engineers have many ways to utilize Hailo’s AI acceleration modules since various PCIe sockets can be found on most standard PC motherboards to add GPUs, RAID cards, Wi-Fi cards, and SSDs.

Orr Danon, CEO of Hailo explains, “Our new Hailo-8 M.2 and Mini PCIe modules will empower companies worldwide to create new powerful, cost-efficient, innovative AI-based products with a short time-to-market—while staying within the systems’ thermal constraints. The high efficiency and top performance of Hailo’s modules are a true gamechanger for the edge market.”

Aside from incorporating an AI processor to handle 26 trillion operations, Hailo’s M.2 is said to outperform a few neural network benchmarks from Intel and Google. 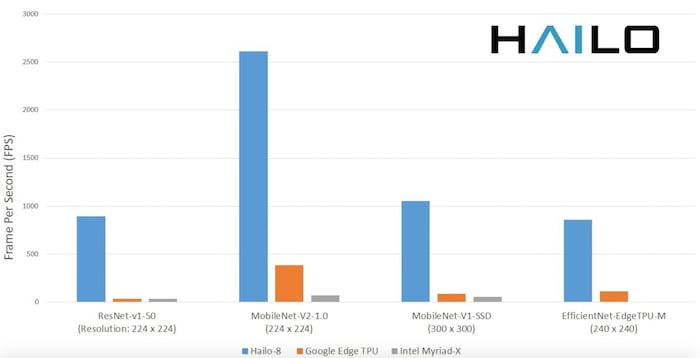 These benchmarks cover a variety of machine learning applications such as image classification, speech recognition, and object detection. 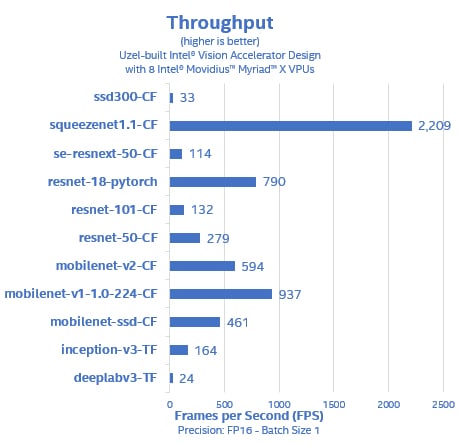 Hailo hasn’t released a full list of benchmarks to compare each module line item to Intel. However, based on the data that is available, Hailo’s benchmark modules are analyzing data at higher frames per second. For example, Intel’s benchmark MobileNet-V2 is at 594 FPS while Hailo has its MobileNet-V2 surpassing 2500 FPS.

Intel’s Myriad modules are at 4 TOPS of processing capabilities that are dedicated to deep neural network computing. The Neural Compute Engine directly interfaces with Intel’s memory fabric to avoid any memory bottlenecks when transferring data.

The Edge TPU is a small ASIC designed by Google that provides high-performance ML inferencing for low-power devices. Google focused on providing an end-to-end AI solution that could be interfaced with edge devices and Google cloud.

Google’s Edge TPU’s benchmark for mobile vision models, MobileNet-V2, is nearly at 400 FPS, which is lower than Intel and significantly lower than Hailo.

An individual Edge TPU can perform at 4 TOPS of chip computation while using 2 TOPS per watt, which in terms of power efficiency is a better option than Intel and Hailo. A Google Edge TPU chip is only available on an accelerator multi-chip module that is still compatible with various boards, only requiring a PCIe Gen 2 and USB 2.0 interface.

Hailo, Intel, and Google’s respective AI acceleration modules can all integrate into standard frameworks, such as TensorFlow and Pytorch—both of which Hailo supports with its dataflow compiler.

If the machine learning application requires a low-power consumption module, Google’s Edge TPU is the most fitting solution. Intel’s Movidius modules may be the best option for ML applications that require hundreds of models to arrive at a smaller, defined model like enhanced vision and image processing workloads.

If data scientists and hardware engineers need an AI accelerator with a built-in processor, they might gravitate toward Hailo’s M.2 module for heavy mobile vision applications such as object detection and image classification.

Congress made a lousy case for breaking up Big Tech

Prances With Horse: The History of the Ferrari Logo

Prances With Horse: The History of the Ferrari Logo