After the latest turn in a surprising, headline-grabbing bidding war for Guyana Goldfields (OTCPK:GUYFF) that has punctuated the start of a new bull market in gold, China’s Zijin Mining (OTCPK:ZIJMF) won shareholder approval last week for a deal that will see them acquire the 5.7 million ounce Aurora gold operation in Guyana.

With the approved offer of C$1.85 per share for Guyana, they’ve beaten two other would-be acquirers with an all-cash deal worth US$237 million. The offer represents an eye-watering 340% premium to the last close of Guyana’s shares before the initial C$0.60 bid announced back on April 27, for a company that many investors and analysts had left for dead after a long string of operational issues at their Aurora mine in South America.

This move continues a torrid pace of M&A by Zijin, a gold mining behemoth with a US$20 billion market cap, after closing the US$1B acquisition of Continental Gold just this March. That deal came only a year after another blockbuster takeover, that of Nevsun Resources and its highly prized copper-gold Timok project in Serbia, edging out rival Lundin Mining’s hostile offer with a US$1.4B all-cash bid.

One of the companies they topped with this latest aggressive offer is a fellow gold producer with an existing interest in the gold-rich jungles of Guyana: Gran Colombia (OTCPK:TPRFF).

On May 11, Gran Colombia had launched an ambitious 3-way merger proposal that involved acquiring both Guyana Goldfields and nearby developer Gold X Mining (OTCQX:SSPXF), a company in which they already have a 19% stake. The motivating factor for the deal was the synergies between Guyana’s producing Aurora mine and Gold X’s massive 10 million ounce Toroparu development project, only 50km away. Management had estimated US$200 million in savings and combined annual production of over 500,000 ounces per year using Aurora’s mill to process Toroparu’s ore and sharing existing equipment and other infrastructure.

We believe that Zijin, with its clear interest in Guyana after this latest takeover (they also hold a 20% stake in nearby explorer Guyana Goldstrike), may be eyeing the potential of adding Toroparu, one of the largest undeveloped gold resources in the Americas. The synergies could materially increase the project’s economics, which currently shows an NPV of $760M, 28% IRR and 2-year payback at a US$1,500/oz gold price, well below the current $1,950/oz price for the yellow metal. 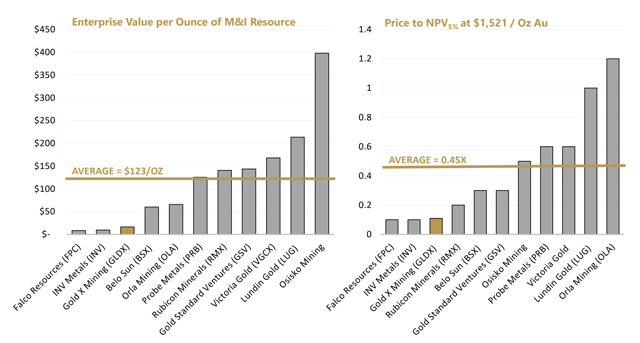 From a company valuation perspective, Gold X currently trades at a market capitalization of US$130 million, translating to less than $13/oz gold, which is well below peer companies in the gold developer category. With an estimated capex of US$378M to build Toroparu, they will look to sell to a larger gold producer with the resources to construct the mine.

New Management Setup for a Takeover

Gold X’s management team, with the recent addition of CEO Paul Matysek, is built for attracting majors and securing a takeover win for shareholders. Serial mining entrepreneurs Frank Giustra and Brian Paes-Braga are strong backers of Gold X. The group has engineered recent takeouts including Lithium X, Goldrock and Potash One, and are here to do it again in an increasingly hot M&A market for large-scale gold projects like Toroparu.

Robert Friedland has since joined as Chairman, and the billionaire mining entrepreneur, who is well-known for selling much larger deposits than Toroparu, wouldn’t have come on board this relatively small company without already having a plan in place. As detailed in the press release announcing his appointment, Friedland will earn a finder’s fee on the company’s successful sale to any group introduced by him.

The most obvious names would be Chinese groups, given Friendland’s strong connections in China and track record of doing deals together. Zijin is a major shareholder in Friedland’s Ivanhoe Mines along with CITIC, as well as a JV partner in the world-class Kamoa-Kakula copper project in DRC. Shandong Gold would be another contender, although they are in the middle of a takeover battle with Russia’s Nordgold to acquire Cardinal Resources and its 7 million ounce Namdini development-stage gold project in Ghana.

What Is the Sinc Function and Why Is It Important in Electrical Engineering?

The main downside risks for Gold X include the gold price correcting after breaching all-time highs, as the project economics are highly sensitive to commodity prices and given Toroparu’s relatively low grade, a return to previous levels closer to $1,200/oz would be negative for the stock and might cause the company to go back into hibernation as it did from 2015 until Matysek joined the company.

Another risk is political instability, as the country continues to be embroiled in a political crisis after recent election results have been disputed by both major parties, resulting in a standstill that has dragged on for months. The company still needs to obtain its final permit before constructing Toroparu, although this shouldn’t be a major hurdle under either party and likely won’t affect a potential sale.

We have no expectation that the company will attempt to develop the project themselves, so near-term dilution is not a concern. This asset is clearly for sale, and the only activity this year will be working on final permitting approvals and publishing the feasibility study, but with four economic studies already published since 2011 we do not expect there to be any meaningful change to Toroparu’s fundamentals.

As gold is now at all-time highs, it’s the right time for Friedland and Matysek to strike a deal and notch a win for shareholders. After recent deals for comparable projects at cheaper valuations, Toroparu’s resource size and production profile is too large to be ignored in a market like this. It is not every day that a 10 million ounce gold deposit comes around, and the scale and mine life provided by the operation will be a great addition to a major or mid-tier’s portfolio. For a larger company, the project should be reasonably financeable with a capital cost below $400 million, without considering potential synergies with the Aurora mine and the metal stream owned by Wheaton Precious.

Overall, we would not be surprised to see a takeover offer before the feasibility study is published. The acquiring company will likely re-engineer the project, especially if the buyer is Zijin, or another party who can strike a JV with them, and they can incorporate the related synergies of Aurora.

In a new gold bull market, with the world’s central banks continuing to print money at a breathtaking pace to counter the economic effects of COVID-19, we expect the positive macro story for gold to continue and see Gold X as a prime takeover candidate, whether by Zijin or another major looking to add ounces and scale.

Country diary: the greenest thing in a green world

In Flames’ clash with Stars, Tkachuk vs. Perry duel will spark fireworks – Sportsnet.ca