GDX: Gold Miners Could Rally By 30% Over The Next Year

In case you’ve missed the recent market volatility, it’s been a strong year for the VanEck Vectors Gold Miners ETF (GDX) with shares rallying over 42% on a year-over-year basis.

While these returns have been excellent for shareholders and some may consider taking profits at these levels, I believe this is a mistake. Specifically, it is my view that GDX is likely going to rally going forward and that an overall rise in the price of gold will greatly benefit the shares of this ETF.

Prior to getting into the reasons as to why I believe that gold is likely going to rally, let’s talk about what exactly GDX is. GDX is an ETF which is administered by VanEck and seeks to mimic the NYSE Arca Gold Miners Index. At present, it charges a management fee of 0.50% per year and it is holding 54 different gold miners.

When it comes to studying any specific gold miner, there are several considerations one must factor into an investment analysis. For example, to really understand the cash flows of a commodity firm, one must grasp the full hedging activities of the organization on top of performing an assessment of the quality of the underlying producing assets the firm owns. This complicated analysis can result in investors spending quite a bit of time comparing one firm versus the other using a myriad of techniques.

Since GDX is holding 54 different firms, a good degree of this analysis “comes out in the wash” so to speak. In other words, since we are looking at a large basket of firms, we can take a step back and consider broad correlations to the price of gold as general drivers of performance of the basket held by the ETF. For example, in the following chart, you can see that there’s a fairly strong correlation between changes in gold and changes in GDX. 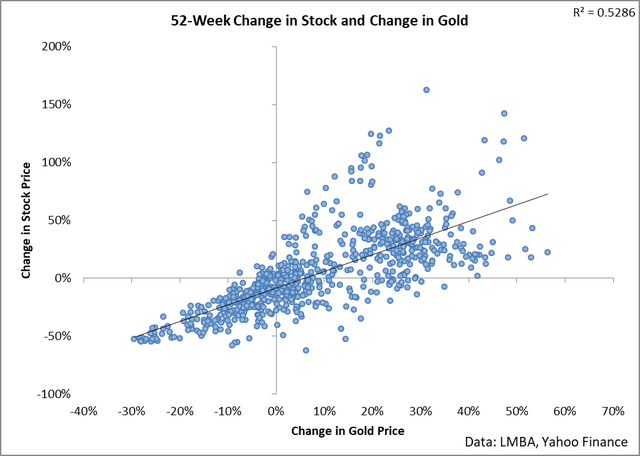 Put simply, this strong degree of correlation between GDX and gold means that we can spend most of our time studying the fundamentals driving the price of gold and get a pretty good idea as to how GDX will perform over the analyzed time frame. Since GDX’s largest holding is only 11.72% of total AUM, this broad diversity allows us to zero in on the fundamental themes at work in the commodity and test GDX’s price response to changes in gold. So, let’s jump in.

The gold market has been fairly turbulent this year with a selloff associated with the market panic earlier this year reversing and leading to a strong rally throughout the present time of writing. 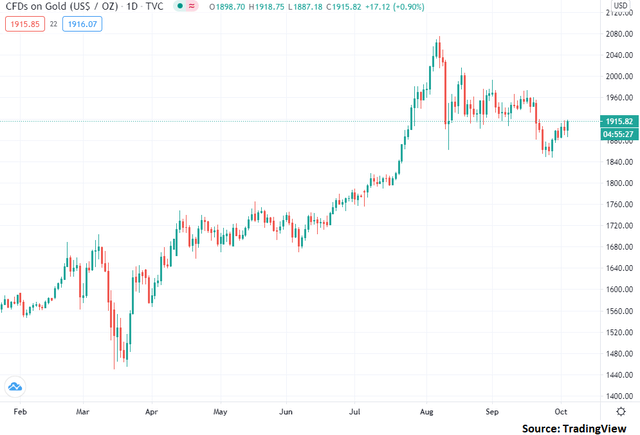 From a trading standpoint, we need to understand a few key things about gold before we can arrive at a comprehensive recommendation on the commodity. The first thing to note is that gold exhibits strong price momentum. That is, when prices are strong, they tend to remain strong.

I’ve created a few different studies to showcase this interesting phenomenon, but before jumping in to the analysis, let’s try and answer the question as per why gold shows momentum. I believe the key fundamental driver behind the fact that gold strength leads to further gold strength is that investors tend to chase returns with the commodity and tend to look for trends to carry forward.

As I observe the commodity, it is my opinion that investors tend to exhibit a good degree of flocking behavior when it comes to gold. That is, investors who are not normally involved with gold tend to only consider getting involved in the commodity when it has been on a hot-streak so to speak. This behavior leads to new waves of capital pushing prices higher following periods of higher prices. To see this pattern at work, here is the CFTC’s Commitments of Traders data for gold futures. 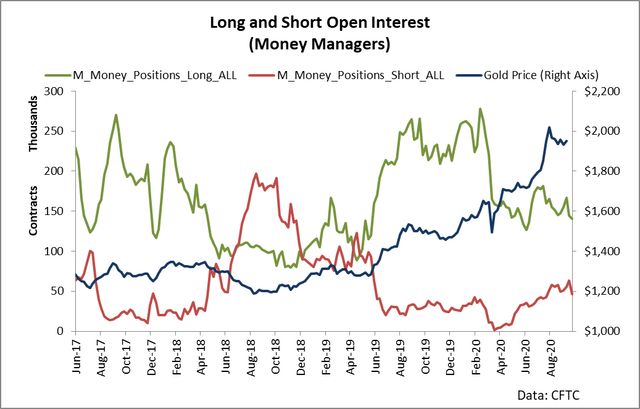 The relationship is far from perfect; however, there are very clear periods of time in which gold makes new multi-month or multi-year highs while long traders are sizably adding to length. For example, in the run-up of 2019, gold hit 1-2 year highs and traders doubled positions during the run-up. In other words, traders were adding to positions after prices had risen substantially which in turn pushed prices even higher.

What is interesting to note here is that over the past few months, large traders have generally been on the sidelines. In other words, long traders have reduced positioning by over 100,000 contracts while gold has continued to push higher. This reduction in positioning was likely a form of profit-taking with gold traders exiting positions to convert unrealized profits into realized gains.

Of note, this means that for the most part, there is a large amount of “dry powder” on the sidelines in the form of total long open interest sitting down 100,000 from peaks. This potentially could be a very bullish catalyst setting up in that if we continue to see gold hit new highs, these traders who are not in the market will likely be chasing prices when they establish new positions since gold has been rising fairly consistently. Rough math shows that these 100,000 contracts add up to around $4 billion in forgone profit from traders who have been on the sidelines during the rally of the past few months. Watching prices tick higher while you’re on the sidelines is a classic recipe for price-chasing. 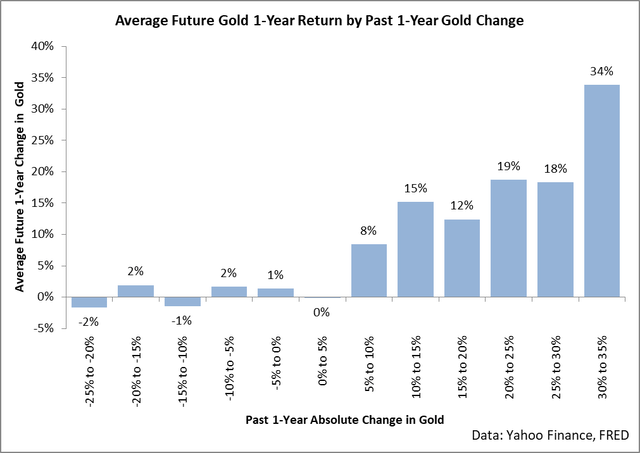 I created this chart using over 50 years of data and it shows a very clear trend of strong prices leading to strong prices. To understand what this study is saying now: within the past month, we have seen the year-over-year change in gold clock in at a rise of around 30-33%. Historically speaking, over the past 50 years when we have seen rallies of this comparable size, gold has on average seen a gain of 34% over the next year.

In other words, if the pattern carries forward through the next year, we could see a strong rally over the year, with the average of all data points coming in at a 34% increase. As an interesting point to consider: this 34% is an average of both increases and decreases. If you were to just average the increases, the average rally was for 47% while the average decline was for 10%. In other words, the data is fairly supportive of further price rallies going forward and it is skewed to the upside.

Another data point to monitor is the current relationship between the dollar and gold. Most investors are aware of this clear pattern in which a weaker dollar is associated with strong gold. 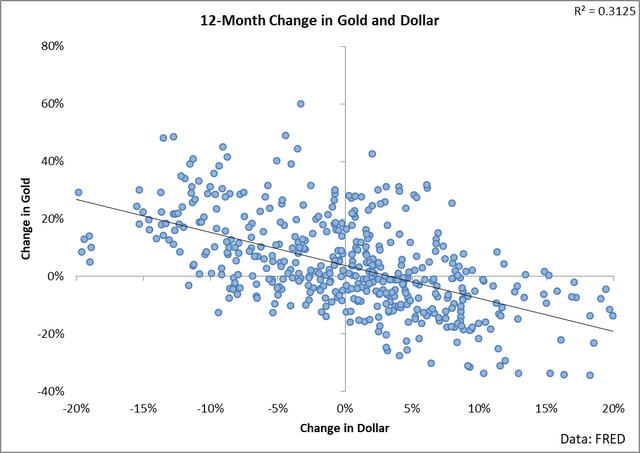 However, what is not obvious is that weakness in the dollar actually carries forward into further strength in gold. 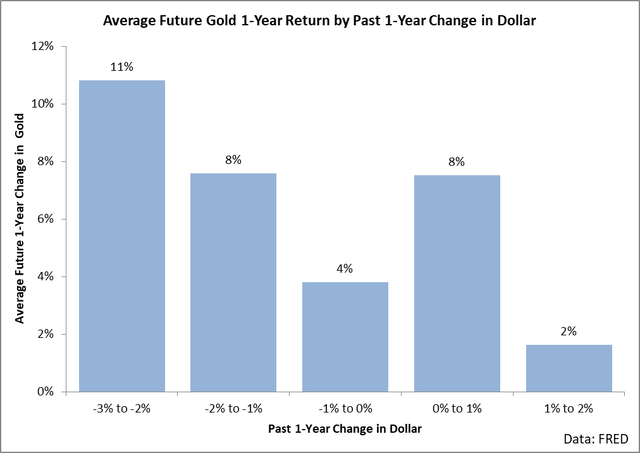 This chart shows a very clear pattern at work in the data in which when the dollar has been weakening, gold tends to strengthen over the next year. For example, given that the dollar has seen year-over-year declines of around 2%, the past 50 years of data would say that gold can expect an average move which is an increase of 11% over the next year. Similar to our prior data point, there’s an interesting wrinkle in the data in which the upside tends to be quite pronounced. In other words, when gold rallies in years following year-over-year declines in the dollar of around the levels we’re seeing, it increases by an average of about 28%.

Put simply, I believe the probabilities favor upside in the price of gold from here. But what does this mean for GDX? It is important to understand that while GDX does display a high degree of correlation with the price of gold, there are periods of pronounced decoupling between these two instruments. For example, if you look at the scatterplot at the beginning of this article, you can see very clear periods in which gold went one direction while GDX went the other.

To help us frame up this analysis in GDX’s terms, we need to consider possible gold price change scenarios and back into how GDX has historically performed in those environments. For a baseline expectation, I believe that gold will rally by 30% over the next year. These prior studies show that if we get a rally, it could be anywhere from 28-47% (assuming the average return is a fair approximation of the future) – however, I believe a 30% year-over-year rally is a fair conservative read of the data. (If you’d like a further exploration of gold fundamentals as well as additional studies, please see my recent piece here.)

So, what happens to GDX when gold rallies by 30%? 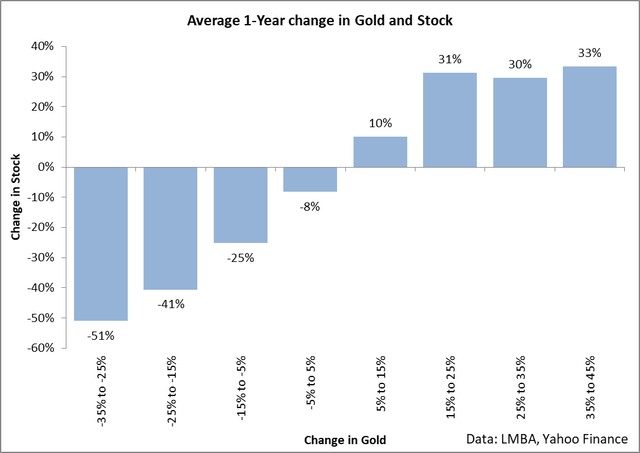 Interestingly enough, on average, a 30% rally in gold tends to see GDX rally by about 30%. In other words, if we see gold rally by 30% over the next year (which I believe is a strong possibility), then GDX will likely increase by 30% as well. In other words, it is likely a good time to buy GDX to capture this opportunity.

There is another interesting pattern at work in the data in that the downside tends to see a greater magnification of losses in GDX’s shares when compared to the upside gains. In other words, when gold falls by say, 5-15% in a year, then GDX tends to have fallen by about 25% during that year – which is more than the lockstep relationship we see on the upside.

I believe this is driven by hedging and cash-flow concerns. A number of the companies held by GDX engage in hedging to lock in cash flows. Hedging activities can be very broad and diverse, but the general approach would be to utilize derivatives to lock in cash flows. This tends to cap the upside in exchange for some certainty of cash flows. I believe this activity is what is keeping gold miners from fully sharing in the upside moves of gold: during a gold bull market, hedging activities will limit the overall profits of the portfolio of firms.

GDX is holding a diverse basket of 54 miners which allows us to do aggregate analysis on gold fundamentals to generate an investment thesis. Gold is likely going to rally by around 30% over the next year based on momentum and dollar tendencies. Historical analysis shows clear correlations between gold and GDX over 1-year time frames.

Look Out, Small-Block V-8s—This Tesla Crate Motor Is Coming For Your Jobs

Get Cozy In Your New Favorite Book Sweatshirts and Hoodies