DraftKings (NASDAQ:DKNG) has seen lots of love from the street lately, with Needham and Argus recently slapped ‘Buy’ ratings on the stock, outlining DraftKings as a leader in the space and the long-term growth potential of the online sports betting industry in the US. While long-term growth is still a long-term positive, DraftKings’ heavy rally has pushed valuation up quite high, alongside a 32 million share offering, lockup expiration on October 20 and potential Q3 weaknesses. Shares should be traded with caution at current valuations, given risks to downside potential weigh on to future upside growth.

Although quarterly results have not been finalized, guidance offered in the S-1A is quite paltry. Revenues are expected to be $132 million at the midpoint, with an estimated $15 million negative impact from atypical hold rates on NFL wagers. Gross margin of 63% in the year-ago quarter is expected to decline “at a similar rate as the year over year decline for the period ended June 30, 2020 (3565 basis points)… due to a relative shift in product offering mix from DFS to faster-growing online Sportsbook and iGaming product offerings, which have lower gross margin percentages.”

So, if gross margin is expected to be near 27-28% for the quarter, that leaves gross profit at ~$36 million, at midpoint of revenues. Marketing spend is expected to be $200 million to $210 million, even as customer acquisition cost was favorable due to high growth in customers. General and administrative expenses are expected to be 100% to 120% of revenues. That means operating expenses could total $330 million up to $370 million. With that small gross profit, net loss could widen to $300 million up to $330 million; as shares outstanding will have been increased by ~36.8 million from the offering, total shares outstanding near $380 million would give DraftKings an EPS of ($0.79) to ($0.87), based on those calculations. It’s mimicking Q2 results, where net loss was 220% of revenues; here, it’s 230% to 250%.

It comes down to DraftKings’ efforts to rapidly grow the platform – at what cost? The company is well aware that “costly sales and marketing efforts, which may not make sense in terms of return on investment,” are inevitable at this stage of the business. Other growth in expenses stems from personnel and headcount growth.

Aside from daunting guidance and hints of accelerating losses as revenues and volume ramp-up, figures around user growth and handle growth point to potential strength, although it won’t necessarily be enough to offset losses in the near term.

B2C monthly unique payers are expected to crest over 1 million, rising 64% YoY, as a return to sports led to a surge in customers, as well as a surge in spending. It’s a big jump from H1, although lack of available sports likely contributed to the YoY decline. KPIs also point to Q4 showing the highest MUPs, so tailwinds from heightened customer engagement might be able to propel MUP to 1.2 million or higher.

Dependency on sports seasons and events is the business model, but risks to those events remain, especially as we head to fall and winter. Coronavirus cases are back on the rise, and sports aren’t in a bubble; in the NFL, a key market for DraftKings, there’s been an emergence of cases, but luckily, the Tennessee Titans have seemed to pass their outbreak and return to training this week. Sports events are still fragile occurrences in the upcoming months, and any increased impact or spread of the virus within sports teams still does threaten game-play, and therefore revenues.

iGaming could offset potential headwinds to sports arising from the virus, as DraftKings saw “greater than 30% in online sports betting market share as of the first half of 2020, and ha[s] emerged as one of the top operators in iGaming despite recent entrance in a five-year-old market.” However, iGaming is only legalized in some form in four states – NJ, PA, NV, and WV (DE and MI have legalized iGaming) – so the market potential hasn’t been reached yet. 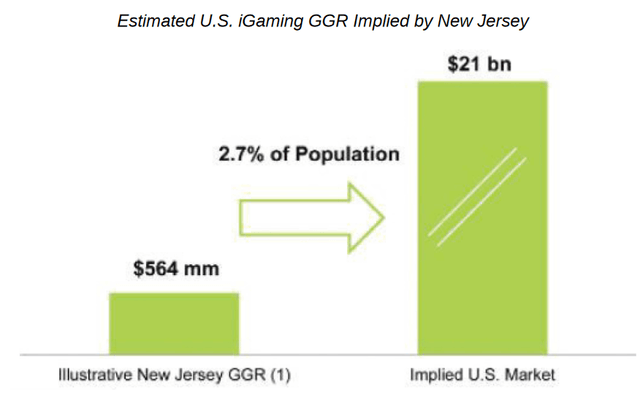 Even with an estimated $20 billion market, revenues from iGaming at that peak market size would range from $600 million to $1.2 billion. That’s also assuming that “30% of the U.S. population gains access to legalized iGaming, and DraftKings is able to capture 10-20% market share,” which might not happen for some years. It’s a similar situation for online sports betting – with a similarly-sized expected industry, 65% of US population having access, and 20% to 30% market share, revenues are estimated to be $2.3 billion to $3.5 billion.

So, let’s just stretch that out to a five-year timeline, to assume that DraftKings has plenty of time to fully grow into those expected percentages. They’re not given, and certainly don’t have to hold true in the future. DraftKings might not hold 30% market share if the industry grows to $20 billion, due to competitive pressure, or estimates for 65% access might be overshooting or undershooting true potential.

That could mean that sales are anywhere from $2.9 billion to $4.7 billion. However, that still puts DraftKings at 4.6x to 7.4x long-term sales [2025], which is far more exuberant than peers, who all trade below 2x long-term sales, and near that figure for 2021 sales, where DraftKings trades at 27x. Penn National Gaming (PENN) trades at just 2.3x 2021 sales, MGM Resorts (MGM) at 1.0x 2021 sales, and Flutter Entertainment (OTCPK:PDYPY) – which has 58% stake in FanDuel, and a higher market share in online betting than DraftKings – at 2.0x 2021 sales. It’s hard to justify that wild valuation even in market conditions where valuations don’t seem to matter. Sales growth just doesn’t look to be quick enough to justify significant upside yet.

There’s also no guarantee that regulatory oversight will unlock the whole, or a majority, of the population to online sports betting, where just 27% of the current US population has access. A detailed chart breaking down states with some form of legalized betting is below – 22 have some form and 14 have online. 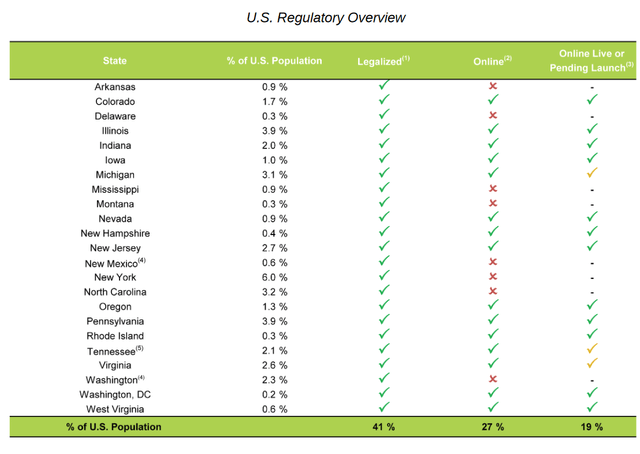 Legalization and regulation allowing sports betting and online sports books into more states does pave the way for future growth, but there’s no timeline as to when states will do such thing. However, regulatory momentum, partnerships with professional teams and media providers, and strong revenue growth derived from bookkeepers in states like NJ could speed up the legalization processes in other states.

Overall, DraftKings is in a quite competitive market, fighting for share in online sports betting, which was hit extremely hard by suspensions of sports globally, and iGaming. The company just filed to offer 32 million shares with an additional 4.8 million to underwriters, and details in the S1-A dated October 6 don’t bode too well. While revenues are marginally higher than consensus at a $132 million midpoint, rising expenses and a declining gross margin point to an extremely wide net loss, potentially up to ($0.87), or $330 million. However, MUP growth was strong with a return to sports, but more customers mean more costs, at least as DraftKings is still in these phases of its ’emerging growth’ story. Sports events are still threatened by the virus, as teams and players are still susceptible to infection as the fall and winter set in, and there’s no telling if sporting events will face suspension in near future, which will severely impact results if that’s the case. Even so, long-term prospects don’t look too great, even when pointing to high growth in online sports betting. DraftKings’ estimated markets in iGaming and online sports betting have some seemingly ambitious target sizes and estimates of market share, and even in an upside-case scenario, long-term revenues from $2.7 billion to $4.9 billion aren’t necessarily enough to justify bloated valuations.

Twitter fixes a bug in its Android app that could let hackers access private data like DMs; 96% of the apps' users currently use a patched version of Android (Sergiu Gatlan/BleepingComputer)

Israel and the UAE Break With Precedent