United Rentals (URI) has seen a volatile year so far, but is currently close to its all time high. This however isn’t a reason to ignore United Rentals. It actually is a great enterprise and a leader in its field. The company’s valuation is still rather low, while the business is robust, even during the ongoing global pandemic. At these prices United Rentals is a solid buy.

Before looking deeper into the business, let’s see how Morningstar sums up United Rentals:

United Rentals is the world’s largest equipment rental company, and principally operates in the United States and Canada, where it commands approximately 13% share in a highly fragmented market. It serves three end markets: general industrial, commercial construction, and residential construction. United Rentals historically has provided its customers with equipment that was intermittently used, such as aerial equipment and portable generators. As the company has grown organically and through hundreds of acquisitions since it went public in 1997, its fleet now includes a range of specialty equipment. In 2019, United Rentals’ revenue was approximately $9.4 billion and its fleet included $14.6 billion of equipment at original cost.

Those who read my articles more often know that I have a strong preference for ‘simple businesses’. That’s to say, businesses that are explainable to almost everybody in a few sentences and don’t rely on the latest tech or some sort of regulation to run the day-to-day operations. United Rentals falls right into this category, so it’s hard for me to not like this company.

Equipment rental isn’t something that comes to mind first when thinking about investment options, but it is inherently attractive. It offer flexibility to customers and they are willing to pay a premium for use over cost-of-ownership. United Rentals in its turn also has great flexibility. It is a large customer at the manufacturers of the equipement it rents out and it can order or cancel products at a whim. It can easily finance (a portion) equipment to boost returns. Finally, United Rentals is a large player on the secondhand market and thereby has influence in the amount of inventory that hits the market. Combine all these elements with the data it gets and it’s easy to see the strength of this business model.

As Morningstar said, the business is still highly fragmented. This makes this industry ripe for consolidation via roll-up strategies and bolt-on acquisitions. This process has been ongoing in the US for a while, as can be seen in the picture below, but there is still plenty of opportunity to take this further.

HOW TO BE A LIBERAL

A share of United Rentals has grown from $19.32 a decade ago to $192.67 as of November 3th. So close to a tenfold return. It has been a rather wild ride, but holding on to this one could be well worth it.

So what are the financials that match this tenbagger? Let’s first look at the income statements. With Q3 figures reported last week, the current situation should be reflected in the numbers. 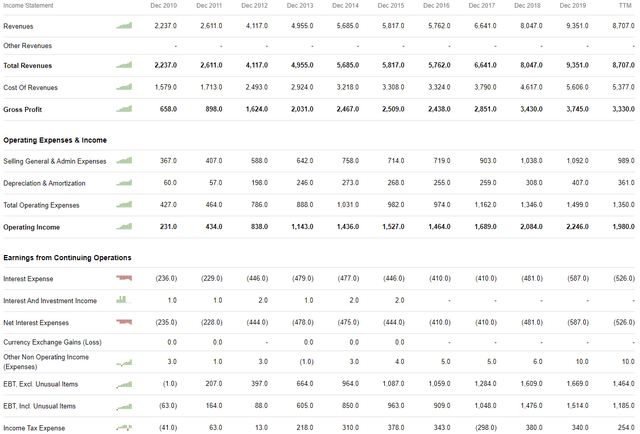 Revenues have quadrupled over the decade. With 2237 mUSD worth of sales in 2010 to 8707 mUSD TTM, doing more business has been a clear driver of performance. It looks like bargaining power due to scale has also increased, since cost of revenue has taken up a smaller percentage of sales. The same can be said about other operating expenses. The result being that from the end of 2010 to the end of 2019, operating income has basically increased tenfold. This could be a big reason why the stock is a tenbagger…

Net income expanded even faster, mainly because interest expenses didn’t grow in proportion with the rest of the company. The year that stands out is 2017, but that’s primarily because of tax credits. Otherwise that performance seems pretty much in line with expectations.

United Rentals has been flexible with its shares outstanding. During the earlier years of the decade this number expanded to help the company grow. This changed during the second half when there was plenty of cash and this could be returned to shareholders by reducing shares. 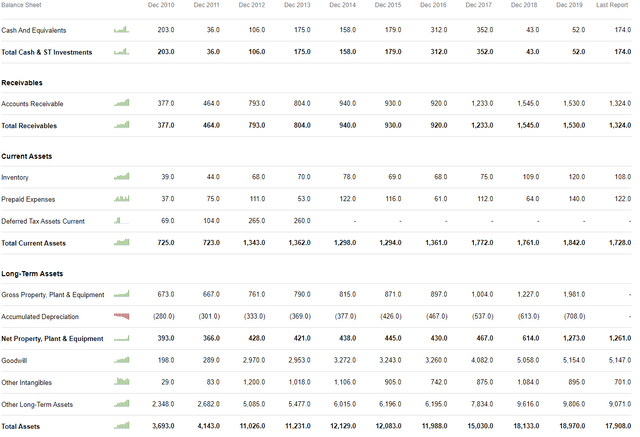 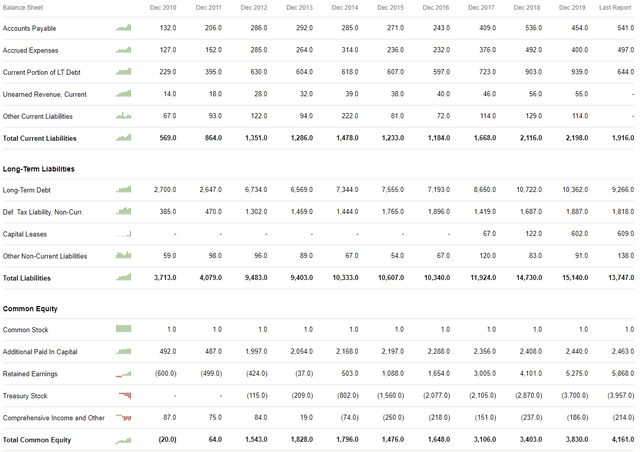 A quick glance at the assets makes clear that United Rentals is all about long-term assets. They make up the bulk of the total assets and as a percentage they have grown compared to current assets as the enterprise expanded. The reason should be easily guessed: as the company grows, more rental equipment is on the balance sheet compared to offices and other corporate functions. And goodwill, let’s not forget about that. As mentioned earlier, this industry in the process of consolidating and, of course, United Rentals is taking part in this. So this explains why ‘other long-term assets’ (rental equipment) and goodwill are so prominent on the asset side.

The other side of the balance sheet shows total current liabilities, which in some years are a bit greater than its asset counterpart and in others are a bit smaller. This tells me that working capital is well managed and it is a focus point of United Rentals. The main part of the total liabilities consists of long-term debt. This shouldn’t really be a surprise since the company is in essence equal to traditional finance companies such as leasing businesses. That said, the fact that the debt-to-equity ratio is gradually swinging to the equity part shows that United Rentals is becoming more and more robust. A major reason for this improvement is the growth of equity. From being negative in 2010, it now is well over $4 billion. This far outweighs the growth in net debt. The balance sheet overall is in excellent shape considering the industry involved. 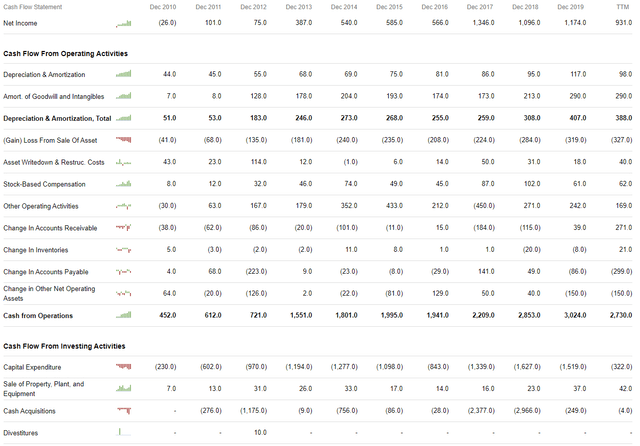 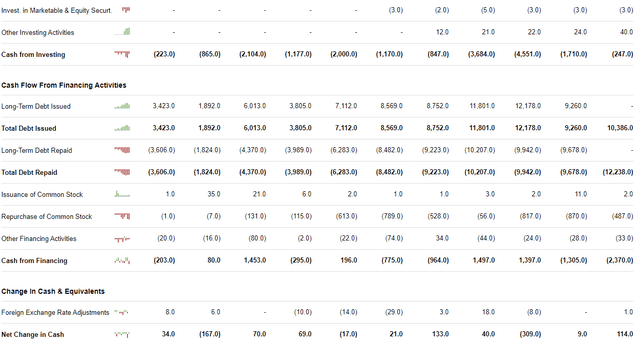 The cash that comes in is mostly used to expand the business via both organic growth and with acquisitions. Sharebacks have become more important and at current valuations, are attractive. On the balance sheet it already became apparent that the company is heavily into financing. This can again be seen here. Again this isn’t an issue with these cash flow numbers. Net debt stands at $10.5 billion, so less than four times cash from operations.

I’ve already touched upon valuation a bit, but looking at more metrics does show a similar picture. Especially when taking into consideration that this could be called a growth stock. The numbers do confirm it at least. 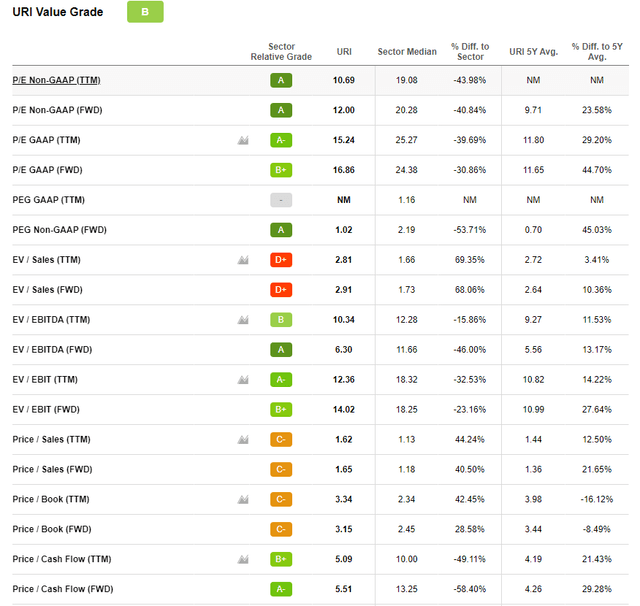 Comparing the numbers to the sector median is an apples-to-oranges story. This is because the constituents of the sector aren’t really comparable to United Rentals. The list is made up of names such as Insperity (NSP), Textron (TXT) and Spirit AeroSystems (SPR), so not really a match. I think that the Ashtead Group is the peer to put the company up against. The number two in the US rental equipment industry is more expensive on pretty much every metric. So this speaks to the advantage of United Rentals.

When looking at the five year average, the current share price is slightly above these multiples. Again, this comparison is somewhat distorted due to the strange year the world is experiencing. Overall, the price can be seen as attractive due to the growth and the relatively low multiples.

An investment in United Rentals comes with several risks. There are some that I’d like to highlight here. First there’s the risk of a slowdown of the overall economy. United Rentals is active in many sectors so if these experience a downturn, they will need less equipment. Luckily, the company is rather diverse: 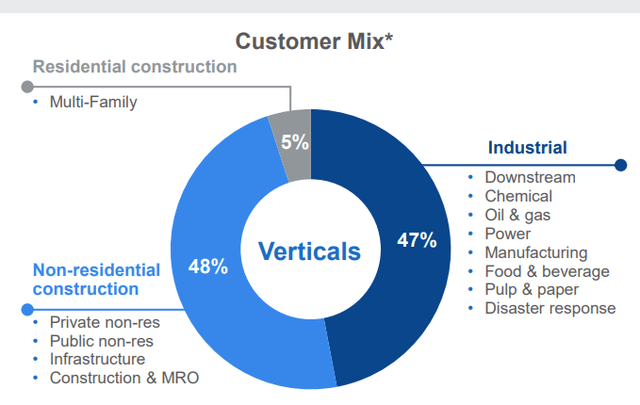 Another large risk comes from the fact that the business model involves the use of significant amounts of debt. So this brings the well-known risks on this front such as rising rates or inability to refinance. The balance sheet has become less reliant on debt, so this looks under control.

The final risk I’d like to point out are the business relations. Currently the company enjoys sizable savings when ordering at manufacturers. If these are cancelled, it would reduce the profitability. Relations with struggling customers can also be an issue if invoices can’t be collected. This can be a big negative for the cash flows.

United Rentals is a wonderful, simple business in a lucrative industry. This industry is in the midst of consolidating and as the largest player, United Rentals stands to profit. It has been an excellent investment over the past decade and it looks to continue on this path for at least a decade more. At its current share price, multiple are reasonable while growth is abundant. United Rentals definitely is a buy.

Disclosure: I am/we are long URI, ASHTF. I wrote this article myself, and it expresses my own opinions. I am not receiving compensation for it (other than from Seeking Alpha). I have no business relationship with any company whose stock is mentioned in this article.

Your Ecommerce Platform Can Help with That

In Flames’ clash with Stars, Tkachuk vs. Perry duel will spark fireworks – Sportsnet.ca