For years, the tantalizing prospect of Texas becoming a “purple” battleground state has motivated Democrats—who have had their hopes dashed in election after election. However, the 2018 midterms showed cracks in the GOP’s hold on the state, with Democrats picking up congressional seats in districts that were drawn by Republican mapmakers to be easy holds. Now polling suggests that 2020 could see further gains by Democrats.

While all eyes are on the presidential campaign, and, er, some eyes are on the surprisingly low-profile Senate race between GOP incumbent John Cornyn and Democratic challenger MJ Hegar, the fiercest battles in Texas are over seats in the U.S. House of Representatives. Four years ago, the state had just one competitive congressional race; this year, there are a dozen races both parties are acting as if they’ve got a real shot at winning.

Today, we’re continuing our “Get to Know a Swing District” series with a look at Texas’s Second Congressional District.

Texas’s Second Congressional District was created upon the state’s admission into the Union in 1845. Democrats gained control of the seat immediately, winning the 1846 election when James Pinckney Henderson was governor. They held it for the next sixteen decades with a few vacancies interspersed, until Rick Perry had Henderson’s job. Notable Democrats to hold the seat include former Confederate postmaster general John H. Reagan, elected in 1883, and Charlie Wilson, who was elected in 1973 and went on to be portrayed by Tom Hanks in the Oscar-nominated movie Charlie Wilson’s War. The final Democrat to hold the seat, Jim Turner, was redistricted to TX-8 as part of the GOP’s 2003 redrawing of the congressional map, prompting his retirement.

In 2005, Republican Ted Poe became the first member of his party to represent TX-2. Poe served seven terms before announcing his retirement in 2018. Nine candidates battled for the GOP nomination to succeed him. Dan Crenshaw, a 34-year-old former Navy SEAL, prevailed and then won the November election by seven points—a smaller margin than Poe had enjoyed in any of his races. That, along with the steadily shrinking margins of GOP candidates atop the ticket in the district, put the race on the Democratic Congressional Campaign Committee’s “Red to Blue” list of races on which it’s focusing fund-raising efforts.

A discarded balloon animal, tossed aside by an undergraduate at clown college. The district encircles much of Houston, along no clear boundary. The central neighborhoods of Montrose and Rice Village are in TX-2; so are the northeast suburbs of Kingwood, Humble, Atascocita, and part of Spring. Some stretches of the district are narrow, encompassing just a few neighborhoods, such as the ones around the Cypresswood Golf Club, or a thin half-mile of connective tissue where U.S. 290 hits the Sam Houston Tollway. 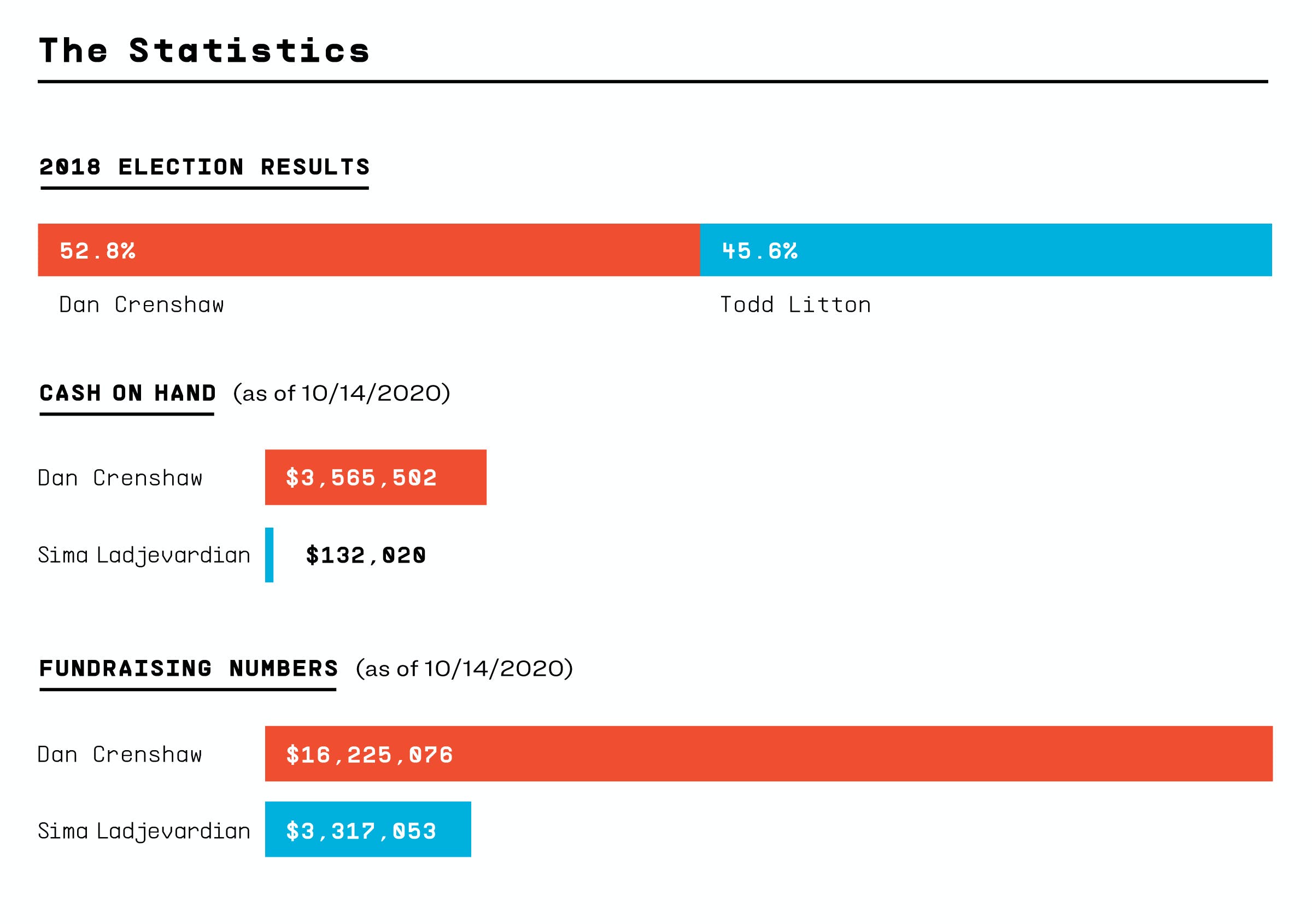 Crenshaw is one of the most prominent freshman members of the House from either party. He rose to national fame days before the 2018 election when Saturday Night Live comedian Pete Davidson mocked his eye patch, which he’s worn since losing his right eye in combat in Afghanistan. The joke was poorly received, and the show invited the candidate to appear the following week. Davidson offered an apology to Crenshaw on air, which the candidate accepted with humor.

Crenshaw has sustained his celebrity by displaying impressive skill as a politician. He’s comfortable on both Fox News and the less-partisan Sunday political talk shows, and has more social media followers than any GOP House member. His temperament, rhetoric, and disposition are less divisive than Trump’s, but he fits well in a GOP shaped by the president. Crenshaw has voted on Trump’s side of issues 93.9 percent of the time. He supports Trump’s border wall, his withdrawal from the Paris Climate Accords, and his positions on various “culture war” issues including athletes kneeling during the national anthem. He’s also become one of the most prominent defenders of Trump’s COVID-19 response—so much so that in April the White House instructed Republicans looking for talking points about the president’s handling of the virus to follow his example.

Crenshaw is as well funded as congressional candidates come. On the force of his personality, he raised $2.7 million in the first three quarters of last year, before many were paying attention to November 2020 House races. Through the end of the third quarter 2020, he had raised more than $16 million, $3.5 million of which remained in reserve.

Ladjevardian immigrated with her family from Iran to Europe when she was eleven years old, amid the upheaval of the Iranian revolution. Her family eventually landed in the U.S., and in the early nineties, she came to Houston with her husband after completing law school in California and served as counsel at some companies he founded. She became actively involved in Democratic politics in 2015, serving on Hillary Clinton’s national finance committee. In March 2017, she joined Beto O’Rourke’s Senate campaign in a senior advisory role. After he lost, she continued with the candidate during his short-lived attempt to seek the Democratic nomination for president.

Ladjevardian entered the party’s TX-2 primary in December 2019, just before the filing deadline, and took first place in the contest in March. Her victory was a few points shy of the 50 percent needed to avoid a runoff, but the second-place finisher withdrew, ceding the race. Ladjevardian has run as a moderate Democrat, in favor of adding a public option to the Affordable Care Act, a ban on the sale of semiautomatic weapons, and transitioning to renewable energy—though she does not propose major new regulations on the oil and gas industry. She also touches on her background as an immigrant both in supporting a path to citizenship for undocumented immigrants brought to the U.S. as children and in opposing defunding the police, telling the Texas Tribune that she “comes from chaos and revolution.” Instead, she favors a ban on chokeholds and no-knock warrants, and an end to qualified immunity, a judicial doctrine that protects police from civil liability for constitutional violations.

While Ladjevardian doesn’t boast the massive war chest that Crenshaw has amassed, she’s nonetheless well funded. Through the end of September she had raised $3.3 million, of which she had a scant $132,000 on hand.

Why It Could Flip

Crenshaw’s seven-point victory in 2018 isn’t much better than the margin that other Republicans who represent swing districts won by—including some, such as Pete Olson of the nearby TX-22, who opted to retire at the end of his term rather than face a tough challenge in a presidential election year that might energize anti-Trump voters. Ladjevardian is an underdog, but she’s scored high-profile endorsements from many of her party’s national leaders as well as prominent local officials, including Houston mayor Sylvester Turner and members of Congress Al Green and Sheila Jackson Lee. She’s also tied closely to O’Rourke, who came within a single point of defeating Ted Cruz in the district in 2018.

Ladjevardian’s slim chances hinge on massive turnout, and Harris County is on pace to dramatically exceed its 2016 vote totals, as well as those in the 2018 midterm.

Why It Probably Won’t

Crenshaw has been popular with his constituents for most of his term. He has some vulnerability around his response to COVID-19—an open letter signed by more than one hundred Houston-area medical professionals made the rounds in the summer calling for him to “stop playing politics”—but his fund-raising numbers indicate that the GOP is determined to hold on to his seat. It wouldn’t be a surprise to see TX-2 become a competitive district in the future—especially if Crenshaw ends up leaving it for a Senate run or presidential ticket in 2024—but it’s hard to imagine a high-profile representative being rejected by his district after a single term.

FiveThirtyEight gives Ladjevardian a 2 percent chance of winning, while the Cook Political Report rates the race as “Likely Republican.” If Crenshaw loses, it’ll be one of the biggest upsets of 2020.

Taking Care of Your Machines

Taking Care of Your Machines

iOS 14 OUT Tomorrow – Everything You Need To Know !