Cenovus (CVE) recently announced an agreement to buy fellow Canadian oil sands producer and refiner Husky Energy (OTCPK:HUSKF) in an effort to add refining and pipeline exit capacity and become a more integrated energy company. But the company also doubles-down on more high-cost oil sands production and much of Husky’s refining/upgrading capacity is primarily configured for distillate production – which is currently in somewhat of a depression due to the lack of jet-fuel demand because of the pandemic. As a result, while the longer-term prospects of the combination may hold promise, the next year or two will likely be a bumpy ride for the duo.

As shown in the slide above shows, Husky brings 410,000 boe/d of upgrading and refining capacity, which Cenovus desperately needs in order to recoup margins on very low priced oil sands production (which it will now have considerably more of). That’s because WCS (Western Canadian Select) trades at a $10+/bbl discount to WTI out to next spring (see below). But of course WTI is also severely depressed and currently trades at ~$36/bbl. That puts WCS at ~$26/bbl.

Yet Husky’s Superior Refinery – configured primarily for distillate production – is still out of commission after being knocked offline by a fire in 2018. And Superior is not expected to resume operations until 2022. And that might not be all bad considering distillate production in the U.S. is severely depressed due to a significant reduction in jet-fuel demand – down more than 50% from pre-pandemic levels as the number of commercial lights have dropped dramatically: 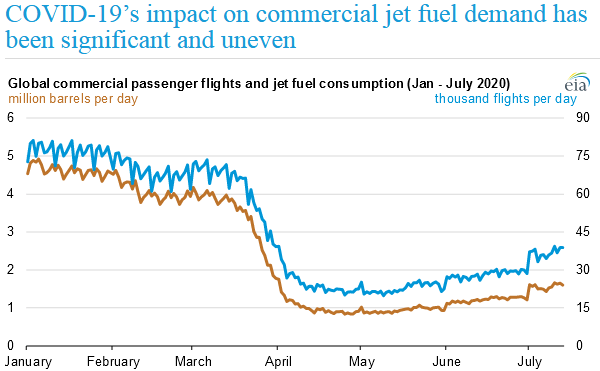 As a result, according to the most recent EIA weekly status report jet-fuel inventory is up 17% yoy, near record highs, and U.S. refinery utilization is an anemic at 74.6%.

With an out-of-control pandemic in the U.S. heading into the Fall/Winter flu/holiday season, the prognosis for a recovery in the airline industry (i.e. distillate demand) anytime soon is not good: 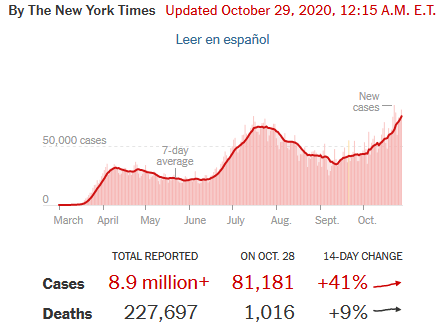 But there is some good news. Husky has 50,000 boe/d of offshore Asia Pacific production that are Brent based barrels, no doubt a welcome addition to Cenovus’ low-margin oil sands production profile. Also a plus for Cenovus going forward is a near doubling of pipeline exit capacity out of Western Canada. One reason WCS trades at such a discount to WTI is the lack of adequate pipeline exit capacity to the U.S. for its Western Canadian oil sands production.

It’s an all-stock transaction (Husky common shareholders to receive for each common share 0.7845 Cenovus shares plus 0.0651 warrants to acquire a Cenovus share with a 5-year term and $6.54 strike price), so CVE isn’t required to issue any new debt to fund the transaction. On the other hand, CVE’s stock has been driven so low it’s not an overly compelling currency and it will have to significantly dilute current CVE shareholders to close the transaction.

Overall, the acquisition will increase CVE’s debt-load by an estimated 65% (Husky has $5.4 billion in net debt) but roughly doubles EBITDA. In addition, the combination is expected to drive $1+ billion in synergies and Cenovus says the transaction is immediately accretive. As a result, it does not appear that Cenovus over-paid for Husky’s assets.

With high-levels and rising cases of COVID-19 infections and widespread community transmission in the U.S. heading into the Fall/Winter flu/holiday season, a general recovery in oil looks to be 18-24 months out in my opinion. While the Cenovus/Husky tie-up makes strategic sense in the long-term, the next couple years is likely to be a slog – like a Husky trying to get traction in melting snow and mush. As a result, there is no reason to hurry into this combination as CVE’s stock is likely to remain dead money for at least another year (or longer). As the chart below shows, this combination can be described as dog-eat-dog:

That said, a few years from now – perhaps in the late 2022 time frame – CVE might be worth a look-see. Right now, there is no catalyst on the horizon to move the shares higher … and likely won’t be for some time to come. That means shares presents significant “opportunity lost” costs … which is really what Cenovus has been ever since buying the majority of ConocoPhillips (COP) oil sands assets back in 2017. Simply investing in a vanilla S&P500 fund instead of CVE since the big oil sands deal would have delivered far superior returns, but then again, so would too would have been just selling the shares and going into cash. But I guess that is true of most all energy companies these days.

Additional disclosure: I am an engineer, not a CFA. The information and data presented in this article were obtained from company documents and/or sources believed to be reliable, but have not been independently verified. Therefore, the author cannot guarantee their accuracy. Please do your own research and contact a qualified investment advisor. I am not responsible for the investment decisions you make.