Landcadia Holdings II (LCA) is a special purpose acquisition, or “SPAC”, that recently agreed to acquire Golden Nugget Online Gaming, which is run by billionaire Tilman Fertitta. The deal has a $745 million valuation and is expected to close in the third quarter of 2020. When the deal closes, the name Landcadia Holding will change to Golden Nugget Online and the symbol will change to GNOG. Golden Nugget Online Gaming offers sports betting on a wide variety of events, including Major League Baseball, the NBA, NFL Football, NHL, soccer, UFC Fights, and more. It also offers traditional casino games, such as slots, Poker, Blackjack, Roulette, and more. Let’s take a closer look at this opportunity.

DraftKings Is Another Recent SPAC Deal That Offers Online Betting

It makes sense to look at DraftKings (DKNG) because it is another online gaming play that also went public through a SPAC deal. When the deal was announced in December 2019, the acquiring SPAC, “Diamond Eagle Acquisition” (DEACU), saw an uptick in its share price. However, in March 2020, the shares were still only trading around $12, and the real action in the stock price did not occur until the day the company name and stock symbol were changed, which was done right after the deal closed. That means a similar trajectory could be in store for Golden Nugget Online Gaming as soon as the deal closes and the name and stock symbol are officially changed. DraftKings started trading under that name and its current stock symbol on April 24th, 2020. That week, the stock was trading for just about $16 per share. As the chart below shows, it went on to hit $44.80 just about 5 weeks later. 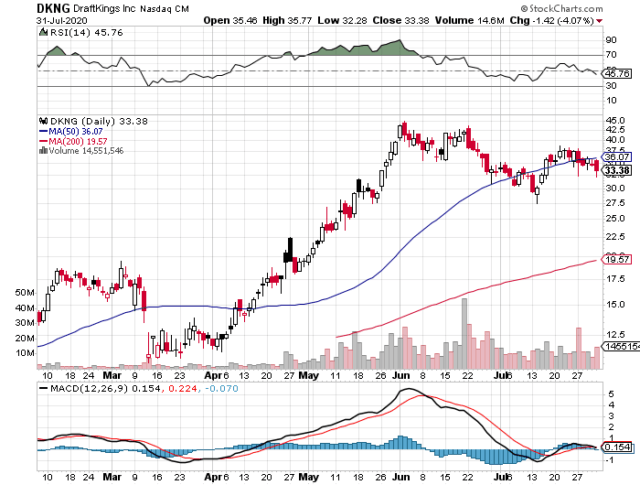 The chart below shows that Landcadia Holdings II was trading for about $10 per share for many months, but when the deal was announced with Golden Nugget Online Gaming, the shares surged to around $17. Now that things have settled down a bit while the deal is in process, the shares can be bought at a much better price. It’s worth noting that the stock is now trading at a support level which is right around the 50-day moving average of $11.59 per share. I think this stock will make another run for $17 per share and beyond when the deal is closed and the company name and stock symbol are changed. This is the exact same pattern that has been seen in DraftKings (an initial surge when a deal was announced, then a pullback, followed by an even bigger breakout once the deal closed), so this could also follow that trajectory. 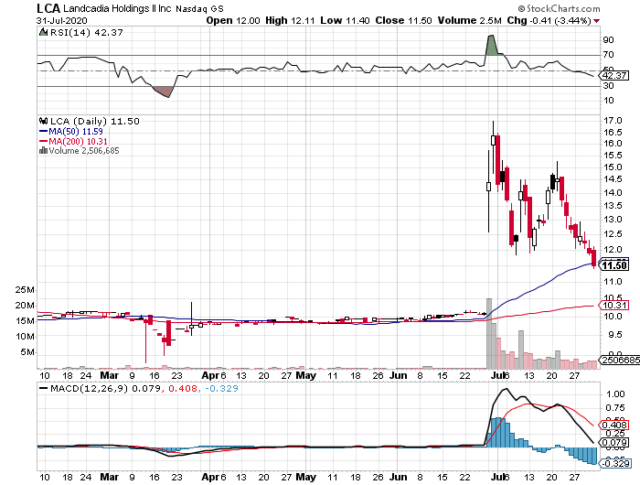 The DraftKings Comparison And The Huge Growth Potential Of Online Gaming

One recent article points out that Golden Nugget Online Gaming (Landcadia) is currently only valued at about $745 million, which could be a bargain valuation when compared to the over $11 billion valuation that DraftKings enjoys. According to a CNBC article, DraftKings and Golden Nugget Online Gaming are the only two pure plays when it comes to online gaming. This scarcity factor could also boost investor interest in Golden Nugget Online Gaming, and it is also likely to be bought by ETFs that are seeking pure- play exposure to online gaming. Tilman Fertitta owns the Houston Rockets NBA team, and because of this, gamblers won’t be able to place bets on this team through Golden Nugget Online Gaming, however, they will be able to bet on other NBA games and other sports events along with more traditional gaming such as poker, slots, etc. The CNBC article points out that the gaming market is much larger and more profitable than sports betting, and it details the massive growth potential by stating:

“In an interview with CNBC’s “Power Lunch” on June 23, Fertitta predicted the online gambling sector, which could surpass $90 billion by 2025, would expand ‘everywhere in the country because of the taxes,” he said. “The iGaming market is so much more profitable and bigger than the sports gaming market.’

In addition to operations in New Jersey, Golden Nugget plans to expand in Pennsylvania and Michigan in 2021.”

One of the many positives here is that investors who buy this stock are getting a seasoned management team led by billionaire Tilman Fertitta. He has an exemplary record of making big money in a variety of businesses ranging from restaurants to hotels to casinos. He knows this business and has experience with all the potential pitfalls and regulatory issues that come with operating a casino. His name and reputation are likely to open doors and clear hurdles with state and local regulators, which could help the approval process in some cases. A recent article points out that Golden Nugget Online Gaming was the first to open in New Jersey in 2013, and it captured 10% of the market share. The article points out that Golden Nugget Online Gaming is already EBITDA positive, that it grew its sales at 48% per year between 2016 to 2019, and that the company expects it can continue its rapid pace of growth in the coming years.

On June 4, 2020, the Roundhill Sports Betting & iGaming ETF (BETZ) started trading and this is another sign of investor interest in the growth of the gaming market. A recent MarketWatch article says that investors are plowing money into this new ETF, and it states:

“BETZ hasn’t just seen strong inflows. It’s also trading so heavily – an average of 2 million shares a day since inception, according to Nadig – that it ranks in the top 20% of all ETFs, putting it at a par with funds that have hundreds of billions of dollars under management and have been around for decades.

And while it’s attracting strong interest from retail investors, with a position in nearly 18,000 accounts on Robinhood, the online brokerage that caters to millennials…”

This shows strong initial interest by millennials and Robinhood traders. Also of note is that this new ETF has already started buying shares of Landcadia Holdings II in order to get into the investment opportunity before the deal closes and the name and stock symbol changes. It was reported that about 2.5% of this new ETF is comprised of what is expected to become the Golden Nugget Online Gaming.

The Golden Nugget Deal Should Close Soon, And The Business Model Can Thrive In The COVID-19 Era

We are currently in the third quarter of 2020, so it won’t be too long before the deal is expected to close. That means share price gains could be coming soon for investors who buy now. There are a few other big potential upside catalysts for this stock: one is that this COVID-19 era has increased the demand for anything that can be done online rather than face to face. We have seen the valuations soar for many stocks that provide online services or enable social distancing. As such, Golden Nugget Online Gaming is perfectly positioned to see strong investor demand for the business model it operates. This company has seen major revenue growth over the past few years, and that growth is only expected to accelerate in this current environment because many people have extra time on their hands and also because it is safer to gamble online. Another major growth driver is the fact that more states are expected to legalize online gambling. With many states seeing less revenues from sales tax collections because of COVID-19, we may see politicians pushing to approve online gaming at an expedited rate.

“Tilman Tuesdays” on CNBC Yet Another Potential Upside Catalyst

As mentioned in this CNBC article, Tilman Fertitta is a regular guest on CNBC. In fact, he has been on CNBC regularly lately in what is known as “Tilman Tuesdays”. In these segments, Tilman is discussing his wide-ranging business enterprise and letting viewers know how things are going in his restaurants and hotels and how business is being impacted by COVID-19, along with the various stimulus programs that are being deployed by the government. As a regular on CNBC, it seems likely that Golden Nugget Online will be the topic of conversation on an upcoming Tilman Tuesday segment. Most likely, this will be just one of the numerous media outlets that will cover the Golden Nugget Online when the company officially begins to trade under that name and its new ticker symbol. It won’t be a surprise if Robinhood and other trading platforms see a spike in interest when this occurs, along with the media and investment exposure it will experience at that time. Robinhood traders and millennials do not appear to care about valuation; they seem to focus on fast-growth companies that are using technology to be disruptive. This is exactly what Golden Nugget Online offers.

There is always a chance that a deal doesn’t close for some reason or that it gets delayed, and that is a possibility to consider. However, I feel that a deal will close as planned and on a timely basis, especially since Tilman Fertitta is involved. I believe he has done his due diligence and that he will succeed in this endeavor to take Golden Online Gaming to the public markets. Of course, a market correction is another potential downside risk. However, that is a risk factor for all stocks, and with new stimulus plans likely coming soon, the market is likely to remain supported. The shares of this SPAC recently traded for about $17 apiece when this deal was announced, but it has settled back down to a very attractive level of just about $12 per share, which also reduces potential downside risks.

Buying this stock gives investors exposure to the fast-growing online gaming industry. Now that the stock is well off the recent highs, it’s offering investors a buying opportunity to get in at a very reasonable valuation before the company name and stock symbol change occurs. At these levels, the potential downside risks appear limited, and the increased investor demand for business models that can flourish even with social distancing is a big positive factor. In addition, having a well-known billionaire CEO involved is likely to help create confidence and exposure for this company going forward.

If you want updates on these stocks in the future, or other dividend, value, and contrarian investing ideas, please consider following me. My investment strategies have resulted in a near-5 star rating on TipRanks and over 9,000 followers at Seeking Alpha.

Disclosure: I am/we are long LCA. I wrote this article myself, and it expresses my own opinions. I am not receiving compensation for it (other than from Seeking Alpha). I have no business relationship with any company whose stock is mentioned in this article.

Additional disclosure: Data is sourced from Yahoo Finance. No guarantees or representations are made. Hawkinvest is not a registered investment advisor and does not provide specific investment advice. The information is for informational purposes only. You should always consult a financial advisor.

How The Buran Ghati Trek Was Explored

How The Buran Ghati Trek Was Explored

In the search for big fresh water trouts in the river of Kaardal, Norway