Boeing (BA) recently announced that it will be consolidating production of the Boeing 787 in North Charleston, South Carolina. We covered that story for subscribers of The Aerospace Forum, and given the time sensitivity of the report, where we assessed that an announcement would be made soon by Boeing, we also expedited publication of the report to the free platform. So, as a regular reader, you were given a premium experience at no cost.

A day after publishing, Boeing announced the decision to consolidate Dreamliner production. There is a lot to be said about this in the scope of production quality as the Dreamliner program has been plagued by a flurry of issues, the current demand profile, the future of Boeing in Washington and the financial implications for the program. Discussing all these elements in a single report will result in something that is too lengthy and you could write a case study on what drove decisions on the Dreamliner program and their consequences. I aim to address the multiple elements involved, but it will happen in separate reports. In this report, I want to have a look at the consequences of the consolidation from a cost point of view and a first sight on the changes learns us that these changes could be in the best scenario accretive to the margins and in a second scenario absorb some of the pricing pressure. The long-term cost efficiency element likely has been a main reason for Boeing to consolidate amidst falling demand for aircraft.

Get Ready for Digital-first Credit Cards

Driving down costs for the Dreamliner

With falling demand for aircraft including the Boeing 787, production is set to decrease as that would mean that some fixed costs would be amortized over fewer units. That subsequently leads to margin pressure and provided a base for Boeing to initiate an acceleration in the decision to consolidate production into a single location. 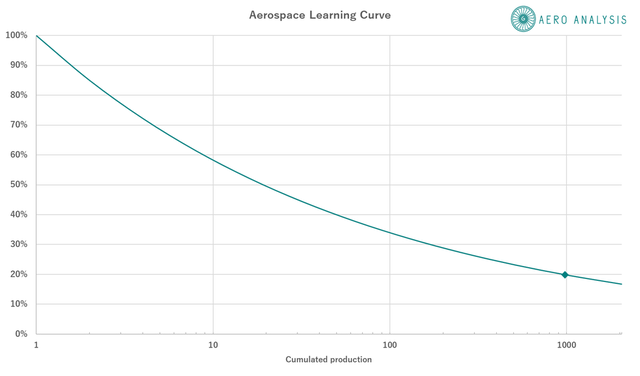 In the aerospace industry, but not just limited to this industry, there is the principle that every time production doubles the costs to produce come down by a certain percentage. For the aerospace industry, this by default is 85%, though it can of course differ materially from aircraft model to aircraft model, but it means that each time production doubles the costs come down by 15%. Now, one thing to observe is that over 1,000 aircraft have already been produced as marked in Figure 1. Using a log-scale, we can conclude that going forward there is not much to achieve in terms of costs reductions from doubling production. That is simply because there are limits to how proficient one or a system can become just from performing repetitive work, and so while this reduction can go infinitely, the production quantity does not and the gains reduce rather quickly. 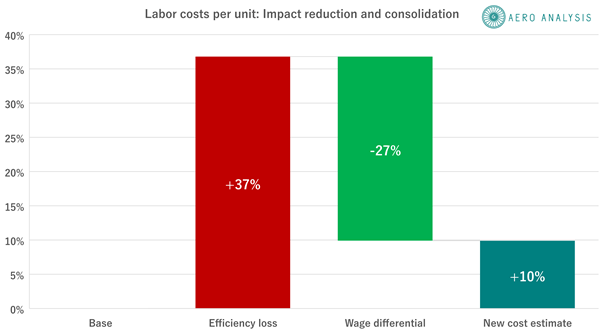 So, there is not a lot of room for costs to go down from achieving cumulated production gains, but I do believe that in a similar way cumulated production drives efficiencies, so does the production rate and that rate has gone down from 14 aircraft per month to 10 aircraft per month to 6 aircraft per month next year. On unit level, the loss of gains in the system would reduce the gains by around 37%. At the same time, labor costs likely are not a huge part of the overall cost mix, so this efficiency loss is damped. We should also factor in the differential between wages in Washington and South Carolina, and there seems to be stark contrast between South Carolina and Washington where, according to our own proprietary data, North Charleston workers in some cases earn “just” two-thirds compared to their peers. So, the 37% headwind from reducing the production rate from 14 aircraft per month earlier to 6 aircraft per month next year is partially offset by the differential in wages. That leads to a total 10% headwind in unit labor costs. While wages are lower in South Carolina, it doesn’t offset potential efficiency losses.

The predominant factor in the effort to cut costs has been in supplier stepdown pricing, and although I believe that reduced production rates are resulting in margin erosion for the Boeing 787 suppliers, Boeing will not break those contracts open to renegotiate the supplier stepdown pricing. So, that is a huge chunk of over 50% of the costs that I do not expect to change any time soon. 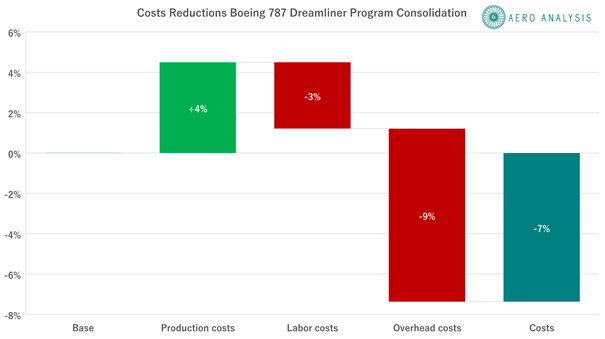 One big cost component, however, that can change are overhead costs related to the Boeing 787 line in Everett. Due to changes in the production mix, Boeing recognized a $151 million charge to the Boeing 767 tanker program due to the reduction in commercial aircraft activities. So, this program carried more of the Everett overhead costs than previously anticipated, and with the Boeing 787 line disappearing from Everett, I believe that this will also have consequences for the Dreamliner margins as those should no longer carry the costs of the huge Everett factory.

The first analysis on the consolidation shows that the changes should be accretive to margins (on the condition that sales prices remain constant). That is not so much a labor costs phenomenon as the reduction production efficiency is only partially offset by lower labor costs. The bigger cost reduction driver are the termination of exposure to costs related to the Everett factory. All factors combined, that could result in a 7% cost reduction for the Boeing 787.

In July, Boeing announced an in-depth study into the feasibility of producing 787s at a single location. According to Boeing, the review examined the impacts and benefits to Boeing customers, suppliers, employees and the overall health of the production system. The 787 study is part of an enterprise review underway to reassess all aspects of Boeing’s facility footprint, organizational structure, portfolio and investment mix, and supply chain health and stability. The analysis confirmed the feasibility and efficiency gains created by consolidation, which enables the company to accelerate improvements and target investments to better support customers.

It is unlikely that Boeing will detail the outcomes of the feasibility study, but I do believe that the main factors discussed in this report showing a potential 7% reduction in costs have been key to Boeing’s decision to consolidate the production in South Carolina. Obviously, while the financial gains seem clear, it cannot be denied that stakeholders will also wonder how product quality looks like in the equation. If quality stands to suffer, it will look like – as many of my readers would put it – just another decision by bean counters tuning for a short-term gain. For now, assessing the financial dynamics, it does make a lot of sense to consolidate in South Carolina.

The potential expansion in margins is important to keep the Boeing 787 in a manageable financial position with regard to the accounting quantity, but what also should be considered is that some of the potential will be used to absorb any pricing pressure that might occur in the coming years.

*Join The Aerospace Forum today and get a 15% discount*

The Aerospace Forum is the most subscribed-to service focusing on investments in the aerospace sphere, but we also share our holdings and trades outside of the aerospace industry. As a member, you will receive high-grade analysis to gain better understanding of the industry and make more rewarding investment decisions.

Disclosure: I am/we are long BA, EADSF. I wrote this article myself, and it expresses my own opinions. I am not receiving compensation for it (other than from Seeking Alpha). I have no business relationship with any company whose stock is mentioned in this article.

Bugging Out: We Take a 1949 VW Beetle on a Fascinating 1949 Architectural Tour

Country diary: these lacewings are welcome guests at my crafty bug hotel