If Donald Trump loses next month’s election, many US allies hope it will be the last the world hears of “America First”.

Joe Biden, his Democratic rival, is planning to reset four years of isolationist US foreign policy under a new tagline, “restoring American leadership”, in an attempt to repair strained diplomatic relations.

Mr Biden has made clear that his administration would reverse Mr Trump’s signature foreign policy decisions by immediately re-entering the Paris climate accord and halting the country’s exit from the World Health Organization.

The former vice-president has also signalled that he will rejoin the Iran nuclear deal if Tehran comes back into compliance, boost diplomatic support for Nato, turn sour on Saudi Arabia, and lead a series of international initiatives, including on the global response to the pandemic.

“America First has made America Alone,” Mr Biden said in a town-hall meeting last week, adding that Mr Trump had embraced “thugs” like the leader of North Korea while undermining support for Nato to the point that it was “at a risk of beginning to crack”.

Foreign policy ranks among the least important issues for the voters who will determine the outcome of the election, according to data from the Pew Research Center. But if Mr Biden unseats Mr Trump, it could be the area where the most immediate impact is felt.

“Biden will have a lot of repair work to do,” said Brian McKeon, foreign policy adviser to Mr Biden. “Trump has attacked all our allies and partners, embraced dictators, launched trade wars that haven’t worked very well for the middle class, and walked away from global institutions.”

Many European capitals hope the tone of Mr Biden’s foreign policy will help assuage fears that the liberal international order and its rules-based multilateralism is in danger of collapsing.

“Europeans need a powerful America,” said a western diplomat based in Washington, although he warned it was “naive” to think that everything will return to the way it was before Mr Trump was elected.

Unlike Mr Trump, a real estate developer and former reality TV show host, Mr Biden has decades of foreign policy experience honed during his time as vice-president and chair of the Senate foreign relations committee.

Europe is especially close to Mr Biden’s heart, according to Tom Wright from the Brookings Institution, who said the Democratic challenger would be “the most pro-Atlanticist president in his bones since George HW Bush”.

Mr Biden is more immersed in and committed to Europe than his former boss Barack Obama, Mr Wright added.

Mr Trump’s campaign argues that the president has notched up a string of foreign policy achievements, not least in the Middle East, where he brokered a deal to normalise ties between Israel and the UAE and Bahrain — an accomplishment that won praise even from Mr Biden.

The president’s supporters also say he has extracted more from Nato allies and tout his decision to kill the top Iranian military commander, Qassem Soleimani.

A Biden administration would maintain some Trump policies

A senior Trump administration official said criticism of Mr Trump’s foreign policy failed to acknowledge his efforts to develop alliance structures outside of Europe, such as with the “Quad” of Australia, India, Japan and the US, which aims to counter China’s influence.

Ken Farnaso, deputy national press secretary for the Trump campaign, said a Biden-Harris ticket “would return us to the days of appeasement and globalism that were catastrophic for American foreign policy”.

But even if a Biden administration adopts a markedly different tone to Mr Trump, some allies of the US are not convinced that it will lead to as much change as billed by either presidential campaign.

Even if the US wants to reclaim its traditional mantle of leadership, we will always be the country that elected Donald Trump

“There are quite a lot of issues where Biden isn’t going to be that different from Trump,” said a European diplomat, noting that the former Democratic challenger is not planning to reverse one of the president’s most controversial decisions: moving the country’s embassy in Israel from Tel Aviv to Jerusalem.

The diplomat also predicted that a Biden administration might not align closely with Europe on relations with Russia or Iran.

He added: “[Biden] will go back on what Trump has done, but he will not give Europeans everything they want or go back to where we were before. That America isn’t there any more.”

Rebecca Lissner, assistant professor at the US Naval War College, said a lasting impact of the Trump era would be more “informal diplomacy” rather than formal treaties.

Ms Lissner said Mr Trump’s decision to pull out of so many international agreements had demonstrated that US presidents cannot force future administrations to abide by previous deals, especially given the polarisation in domestic American politics.

She added: “The era of major treaties is over. It’s likely our counterparties won’t trust the US to uphold our end of the bargain. Even if the US wants to reclaim its traditional mantle of leadership, we will always be the country that elected Donald Trump.”

Mr Biden’s room for manoeuvre is also limited by the rise of China, Ms Lissner said, adding that America is in a “state of relative decline” and had to fundamentally reimagine its approach to foreign policy and dispense with Obama-era assumptions. 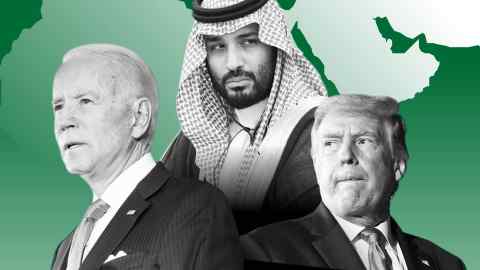 But Mr McKeon, the Biden foreign policy adviser, said he did not think Mr Biden “accepts the notion of relative decline”, noting the foreign policy establishment in the US had similar fears in the past — like “Japan eating our lunch” — that had not come to pass.

Mr Wright from the Brookings Institution argued that the Biden camp was divided into “restorationists” and reformers who were divided in their approaches to China, the Middle East, the economy, liberal democracy and Russia.

One Biden adviser said such divisions did not reflect his experience inside the Biden campaign, but another told the Financial Times debates on foreign policy and national security inside the party were “complicated”.

Mr Wright said the divides would surely reveal themselves if Mr Biden were to win: “There are pretty amicable substantive differences . . . but a lot of that has been concealed so far.”

How Egypt Lost Its Leadership of the Arab World