The national race between President Donald Trump and Democratic nominee Joe Biden has been remarkably stable ahead of the first debate, but Morning Consult data shows the former vice president benefiting from another kind of bump from his party’s national convention that could help to insulate him from the Republican attacks yet to come on stage and more broadly in the contest’s final month.

Since the first day of the Democratic National Convention last month, Morning Consult’s Political Intelligence platform found Biden’s favorability has rested above water, with half of voters expressing favorable opinions about him and 46 percent expressing unfavorable views in the latest daily tracking of 13,327 likely voters conducted Sept. 25-27. Trump’s numbers have remained consistently in the red, with 54 percent saying they have an unfavorable view of the incumbent, similar to his 56 percent negative rating ahead of the Republican National Convention.

While Trump’s convention was focused on projecting the incumbent’s strength on issues such as law and order and the economy, the Democrats used the spotlight to cast Biden as a compassionate character with a knack for connecting with everyday Americans, highlighting personal stories about his loss of family members and his struggle with a stutter, and attempting to appeal beyond the Democratic base with the elevation of Republican supporters.

As the campaign enters its final month — with three head-to-head debates and Biden’s heightened physical presence on the campaign trail — another survey lends more credence to the notion that those efforts have paid off for Biden, who was already more popular than 2016’s Democratic nominee, Hillary Clinton. In Morning Consult/Politico polling conducted Sept. 25-27 among 1,991 registered voters, far more consider Biden to be compassionate, capable, stable and honest than Trump. At the same time, voters are more likely to say Trump is thin-skinned, sexist, reckless and racist. 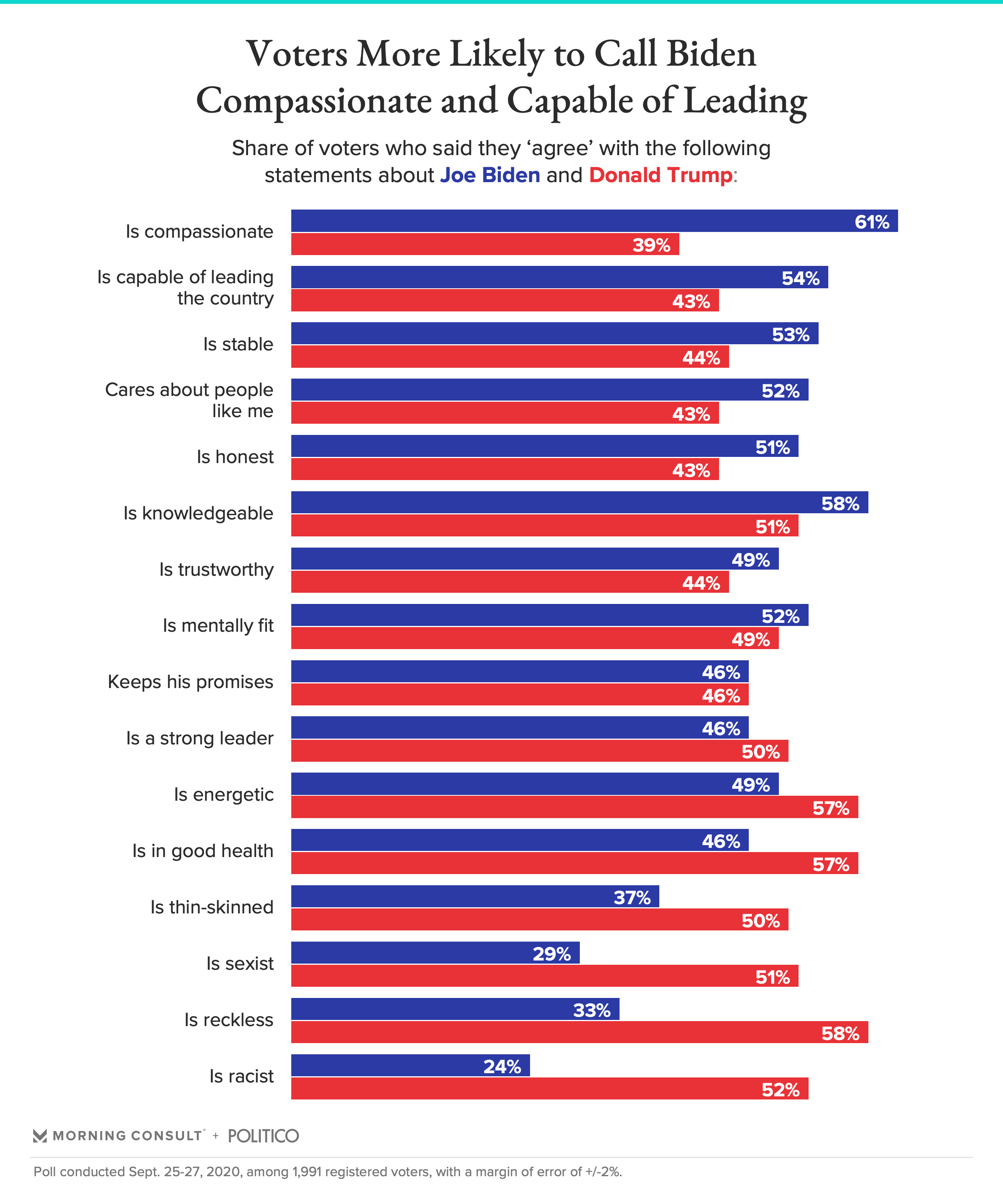 In the face of the Trump campaign’s efforts to question Biden’s acuity, voters are also slightly more likely to say the Democrat is “mentally fit” than the incumbent, 52 percent to 49 percent, though more question Biden’s health more generally.

Democratic strategist Steve Schale, an alum of former President Barack Obama’s Florida campaigns who’s leading the pro-Biden super PAC, Unite the Country, said the debate serves as an opportunity to let voters judge Biden “with their own eyes” instead of deceptively edited “15-second splices of him not putting together a sentence” pushed around the internet by the Trump campaign.

“He does really well in these moments where he can show a broad swath of America just who he is,” said Schale, who noted the positive reception to Biden’s DNC speech, which Morning Consult/Politico polling found had registered positively with 41 percent of voters, compared with 32 percent who said the same of Trump’s RNC speech.

One Republican strategist close to Trump’s re-election campaign said the president should expect Biden to be well-prepared and unflappable in response to the attack lines that have already been revealed, such as hits on the Supreme Court, China, taxes and the claim that he’d be a puppet of the Democratic Party’s more-liberal elements, but that the president could throw Biden off his game by targeting his family, particularly regarding his son Hunter Biden’s work in Ukraine.

Trying to win a popularity contest with Biden is unlikely to deliver the desired results, said the strategist, but Trump can use his time on stage with his rival to project strength as he did in the convention, and in turn make Biden look weak. That approach may help sway some of Biden’s softer supporters and the country’s small share of undecided voters, who might be receptive to arguments that the former vice president doesn’t have what it takes to revive the economy and suppress his party’s leftward impulses, the strategist said.

The survey of likely voters found 4 percent said they did not know who they were supporting, and 2 percent were opting for someone else. Biden holds a 7-point lead over Trump nationwide, 51 percent to 44 percent, close to where it’s been for several weeks. 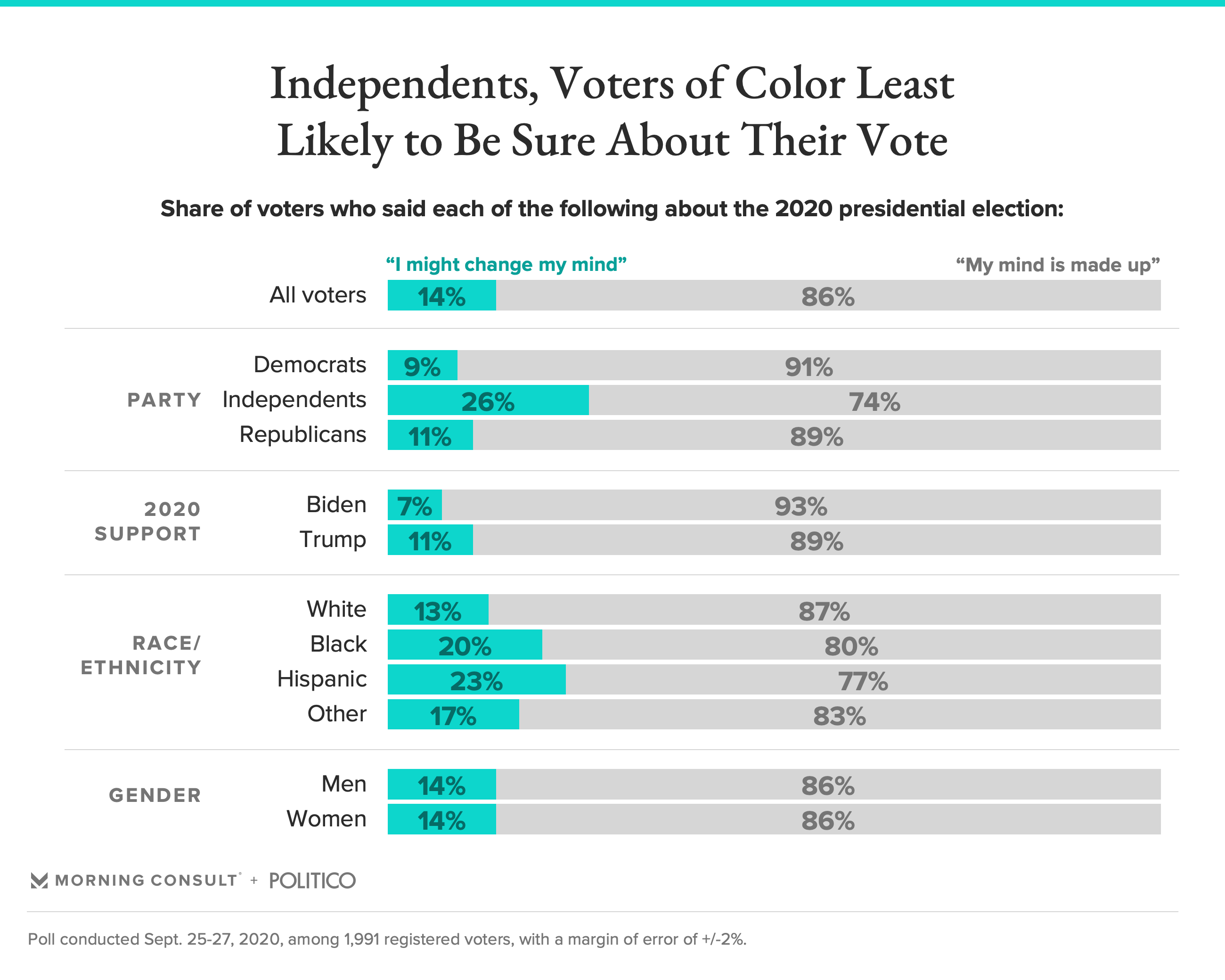 The Morning Consult/Politico survey conducted over the weekend found 86 percent of voters said their position on the 2020 race was immobile, compared with 14 percent who said they might change their mind. Voters who back Biden were slightly less likely than those who back Trump to say there’s a chance they could change their support, while 26 percent of independents said their minds could change.

Doug Heye, a Republican strategist and former spokesman for the Republican National Committee, said he expects the three presidential debates to carry significant sway this year, even with the static public opinion on the contest thus far. (According to the poll, 71 percent of voters said they planned to watch the debates, and 21 percent of them said they could have an impact on who they vote for).

More than the coronavirus pandemic and the economy, Heye said for both candidates, the debate is about showing voters their temperament and ability to do the job — the former being of chief importance for the president and the latter weighing heaviest for his challenger.

“For Biden, he can very ill afford a kind of Rick Perry moment that can define the next 40 days,” he said, referring to the former Texas governor’s famous “oops” moment that effectively ended his bid for the 2012 Republican presidential nomination.

If Biden leaves the debates having given the country more confidence in his ability to be president, Heye said “then the election is his to lose.”

Get the latest political news and analysis delivered to your inbox every morning.

From chief technology officer to CEO

From chief technology officer to CEO