With the U.S. government on the warpath to break up big tech, investors need to start preparing for the eventual possibility. Alphabet (GOOG, GOOGL) sits as the favorite stock to benefit from a split-up. Not only is the stock the cheapest in the big tech universe looking at non-GAAP numbers, but also the company has valuable parts ignored by the market due to the dominance of Google Search. My investment thesis remains even more bullish on the stock on a breakup despite a period of likely higher legal expenses.

The House Judiciary Committee released a report suggesting “monopoly power” at four of the biggest U.S. tech firms. Besides Alphabet, Amazon (AMZN), Apple (NASDAQ:AAPL), and Facebook (FB) are the targets of the Feds while Microsoft (MSFT) has so far set out any regulatory questions.

The DOJ and state regulators apparently are on the verge of pursuing a legal case to force Alphabet to unload their dominant Chrome browser that is used to funnel traffic to the Google search engine. According to the Feds, the end result is a dominant position in the large digital ad market via a near 90% dominance in the U.S. search engine market share. 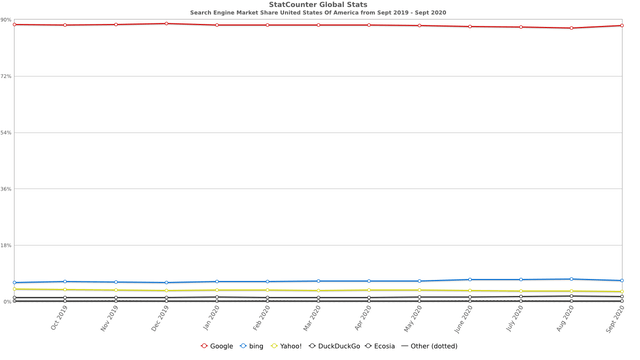 Despite the extreme value inherent in search engine revenues, nobody, including Microsoft and Yahoo, has been able to challenge the dominance of Google search. The data doesn’t exactly support that consumers wouldn’t still use Google Search, if the Chrome web browser was owned by an independent company.

Any antitrust case is likely to take years, and no certainty exists that the DOJ would be successful in proving a case of Alphabet utilizing monopoly powers to control the market. After all, the digital ad market is competitive, with Facebook an equal competitor to Google, and Amazon quickly encroaching on the market with the online retailer able to provide advertising alongside product listings and related searches.

Even with analyst EPS estimates for 2021 down to only $56 from $63 before the virus crisis, the stock only trades at a forward P/E of 28x. Technically, Facebook is slightly cheaper now based on these GAAP numbers.

The issue with Alphabet is the extreme impact of stock-based compensation. My previous estimates have the tech giant generating a 2021/22 EPS of $83 before buyback benefits. With $117 billion in net cash and $170 in cash per share, the stock only trades at a far more reasonable 17x earnings.

Professor Galloway actually predicts that Jeff Bezos may even beat the government to the breakup plans via a spinoff of AWS in 2021. Alphabet could easily do the same with a division like Waymo that contributes to losses and drags down the overall value of the large tech company. As well, the spinoff of YouTube could alleviate some fears in digital ad dominance while allowing the video streaming service to thrive as an independent entity.

Alphabet has become a diverse business where the company is actually so much more than Google Search. YouTube is a major player in digital ads and streaming video subscriptions, and Google Cloud gets limited attention from the analyst community.

For the 1H of 2020, Alphabet had the following reported quarterly revenues. The numbers were weaker than normal due to the hit in Q2 advertising revenues.

Alphabet has a current valuation of only $1 trillion, while Needham assigned $900 billion valuation targets to the top three business units far over a year ago. At the time, some analysts were valuing Waymo at over $100 billion.

The biggest issue with analyzing Alphabet is the lack of detailed revenues for services such as Gmail and Google Play. A lot of revenues are lumped into the other part of Google Search & other, along with the Google other segment.

The numbers from Needham actually appear very low, considering my valuation already places a $1,800 target on the stock as the ad market normalizes or a $1.2 trillion valuation. The stock has more upside potential with a breakup of certain business units.

As an example, Netflix (NFLX) is worth $238 billion, suggesting YouTube as an independent company would have far more value than $200 billion. Netflix is a cash burning machine with $25 billion in targeted 2020 revenues, while Alphabet is a behemoth with $173 billion in annual revenues during the pandemic. YouTube alone could generate over $15 billion in ad-related revenues alone. Also, the business has subscription revenues mixed with Google other revenues that could make the stock more appealing to investors than Netflix.

The analysis doesn’t even include Google Cloud that will top $10 billion in revenues and easily reach a $100 billion valuation right now. In total, the Google other revenues which includes products such as the Pixel phone and Nest home products amounted to Q2 revenues of $5 billion and weren’t factored into the analysis of analyst Laura Martin.

A more likely scenario are these below valuations:

For now, Google Search encapsulates the ad revenues of Chrome, Maps, and Gmail. These base valuations assign a $1.2 trillion valuation to the stock. With a better breakout of revenues by division, Google Play and other units could easily be assigned even higher values.

The key investor takeaway is that the anti-trust case against Alphabet and the other tech giants could take years to resolve. The tech giant could easily take the initiative to spin off divisions to increase the total market valuation of the company and reduce the case of U.S. regulators. Either way, Alphabet is easily worth more under a breakup scenario as the stock is too cheap now, and several standalone entities could unlock hidden value.

If you’d like to learn more about how to best position yourself in under valued stocks mispriced by the market, consider joining Out Fox The Street.

Disclosure: I am/we are long AAPL. I wrote this article myself, and it expresses my own opinions. I am not receiving compensation for it (other than from Seeking Alpha). I have no business relationship with any company whose stock is mentioned in this article.

Additional disclosure: The information contained herein is for informational purposes only. Nothing in this article should be taken as a solicitation to purchase or sell securities. Before buying or selling any stock you should do your own research and reach your own conclusion or consult a financial advisor. Investing includes risks, including loss of principal.

Getting A Yield Pickup In Misunderstood Airport Bonds