Afghanistan’s top peace negotiator says Washington has given the Taliban the upper hand in talks after Donald Trump pledged to withdraw all US troops by Christmas.

Abdullah Abdullah, who is leading the Afghan government’s peace negotiations with the militants, told the Financial Times in an interview that there was still uncertainty over the drawdown of troops. He blamed the confusion on the looming US presidential election.

“Nobody has given any clarity,” said Mr Abdullah, referring to the US withdrawal. The Taliban who thought “that if the US withdraws then they can come back by force . . . they might see it in their advantage”.

The Taliban welcomed Mr Trump’s tweet announcing the decision last week. The group’s senior leadership told CBS News that they hoped the president won re-election and would “wind up US military presence in Afghanistan”.

Peace talks between Afghan officials and the Taliban began in Qatar on September 12, 19 years and a day after the attacks on New York that led to the US invasion of Afghanistan. Negotiators are hoping to chart a postwar future for the impoverished country that relies on $8.5bn a year in foreign aid.

Mr Trump’s tweet said all US troops in Afghanistan “should” be home by Christmas, appearing to announce an accelerated withdrawal timetable.

His remarks undercut Robert O’Brien, his national security adviser, who had said hours earlier that troop numbers would be reduced to 2,500 by early next year.

“[He’s] the commander-in-chief and we all follow his lead,” said a senior administration official of Mr Trump’s announcement, which took the Pentagon by surprise. Some military experts have dismissed the tweet as an exaggerated election ploy.

Senior US military officials have warned that a hasty withdrawal would compromise the US-Taliban peace deal by undermining Kabul’s position.

General Kenneth McKenzie, head of US Central Command, had outlined plans to reduce troops to about 4,500 by November. US defence officials assess they cannot do their job in Afghanistan with fewer than 4,500 troops.

In the peace deal signed with the Taliban in February, the US agreed to progressively withdraw troops on condition the Taliban did not allow al-Qaeda to “threaten” its security, halted attacks on US troops and engaged in intra-Afghan talks.

But General Mark Milley, chairman of the joint chiefs of staff, said there had been no significant reduction in violence over the past “four or five” months.

Pakistani officials have also expressed concern about an accelerated withdrawal. Prime Minister Imran Khan warned in a recent Washington Post editorial that a “hasty international withdrawal from Afghanistan would be unwise”.

Islamabad has supported the US maintaining a presence in Afghanistan rather than a complete exit that could lead to greater regional instability. 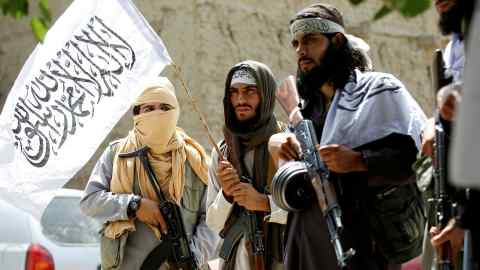 “This would be a big disaster. The Taliban who welcomed Trump’s remarks will then consider Afghanistan to be free to conquer and install an Islamist government,” said an official in the Pakistan foreign ministry who wished to remain anonymous.

Mr Abdullah, an eye doctor who previously served as Afghanistan’s chief executive and foreign minister, said he had urged Pakistani officials to “encourage the Taliban to show flexibility on those areas of differences where we are not making progress, including a reduction in violence”.

Pakistan’s intelligence chief was expected to visit Doha this week to press the Taliban to reduce its attacks, according to a source close to the Afghan negotiating team.

Mr Abdullah also called on India to play a greater role in the peace process.

Even as Russia and China engage with the Taliban, New Delhi has been reluctant to establish diplomatic relations, insisting it is a terrorist proxy of regional rival Pakistan.

“I asked them [Indian officials] to be more active in the efforts in support of peace, to keep the engagement today and increase it and energise it. It’s important for Afghanistan and it’s important for India,” said Mr Abdullah.

“[Mr Trump’s] tweets create uncertainty and there was already a high degree of uncertainty among the Afghans. An early withdrawal destabilises their future,” said Andrew Watkins, senior analyst for Afghanistan at International Crisis Group, a non-profit organisation.

“It erodes and degrades the relationship between the United States and Afghan government, which was already fragile to begin with.”

Mr Abdullah said the first goal of the peace talks was to agree on a code of conduct, which could involve a reduction in violence, before setting an agenda. He said they were “far from” discussing a power-sharing arrangement.

Howard Schultz: U.S. could lose 'the next Starbucks' without more aid to small businesses