A Stock Market Storm Is Forming Just Over The Horizon

Some investors are choosing to continue to ignore the market signals, despite the warning signs growing louder as the stock market is not only sick; it is on life support. Over the past few weeks, I have been laying out and building a narrative on the dangers in this equity market, and the potential for what could be a sharp correction. Some choose to mock me and continually remind me how wrong I have been.

While it is true, the equity indexes have proven me wrong since the middle of July, the warning signs have been building. Still, the overall message when watching the options activity, the technical setups, and the fundamentals are unchanged. In fact, they have grown worse.

One must remember, these things take time to develop; they do not happen overnight. It is like watching a hurricane develop, starting as a just a tiny storm off the coast of Africa. Then, when it hits the warm waters of the Atlantic, it grows.

The same can be said of the S&P 500, which has seen its average drop to its lowest levels in the middle of July. 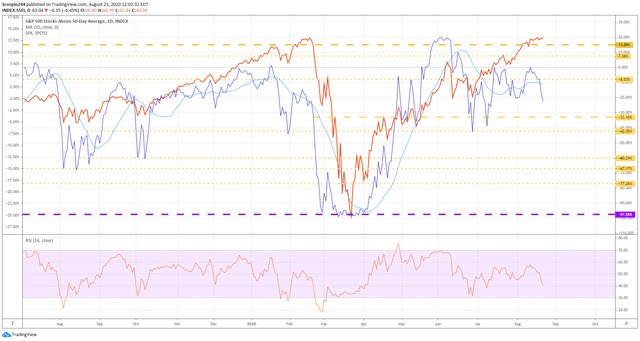 It would suggest that market leadership, and breadth is narrowing. It means fewer and fewer stocks are leading the market higher. Not a sign of a market picking up bullish momentum.

But it isn’t just here in the US momentum is beginning to fade, look at the heavy technology indexes abroad, such as South Korea. The KOSDAQ has declined by 8% just since August 10. There has been a noticeable divergence between the Nasdaq 100 and the KOSDAQ over the past few days; it seems noteworthy. 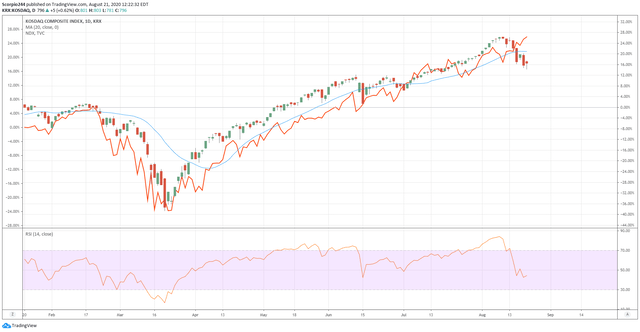 It is also happening across the emerging market space when comparing the NASDAQ 100 to the EEM ETF. 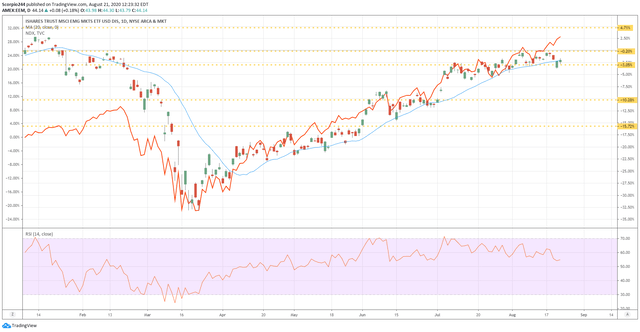 The divergence is even more notable when comparing the NASDAQ 100 to the German DAX. 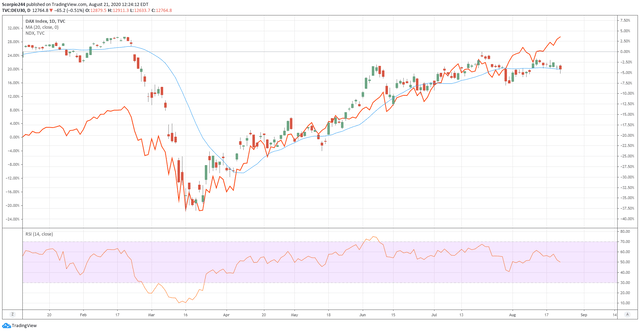 The point being is that the market internals are weakening in the US, and markets around the globe are now beginning to weaken too. What seems more shocking is when you compare a chart of the stocks above their 50 day moving average in the NASDAQ to that of South Korean Kospi, the similarities are shockingly closer than one would think. It suggests that markets, despite being worlds apart, actually all do trade together and that a US divergence isn’t likely to last much longer. 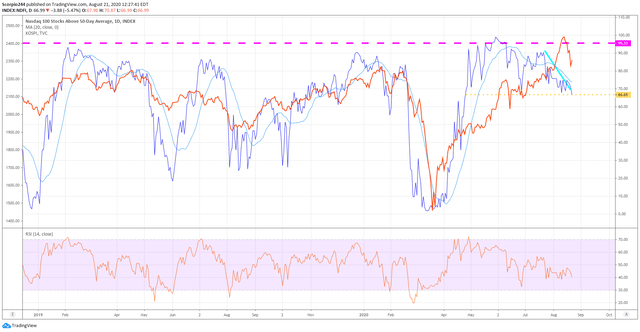 Additionally, we have seen weakness in other assets such as oil, which has gone nowhere since June 23, trading around $42. One would think, in an environment where the economy is “improving,” and the dollar is “tanking”, oil prices would be soaring. Instead, it is the opposite, with oil flatlining. 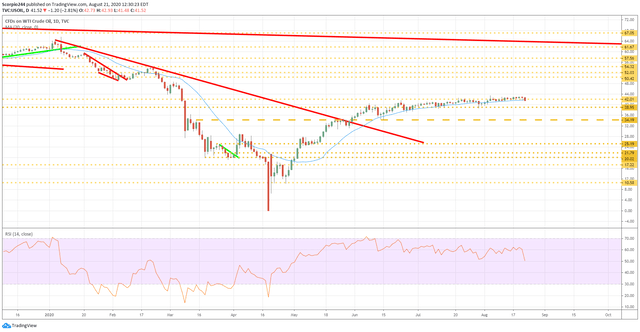 Copper prices have soared along with other risk assets, like the NASDAQ 100. But has failed to break out of a technical range, and should the dollar strengthen further, copper is likely to continue to trend lower. 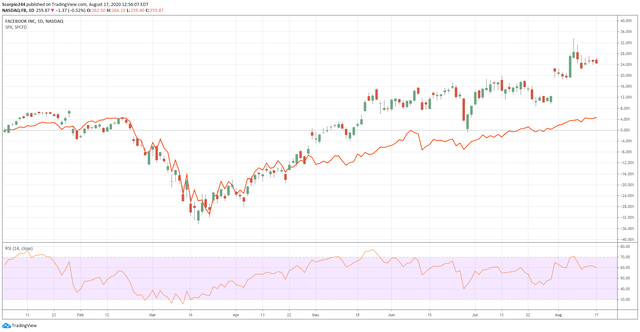 The dollar index actually does have a reasonable chance to strengthen after falling sharply, which in large part has helped to fuel the massive risk-on rally we have seen. A chart with the dollar from an inverse standpoint versus the NASDAQ tells the story rather well. The two followed each other tightly, which would suggest a further dollar rally would be bearish not just for commodities but likely the risk assets like the NASDAQ 100. 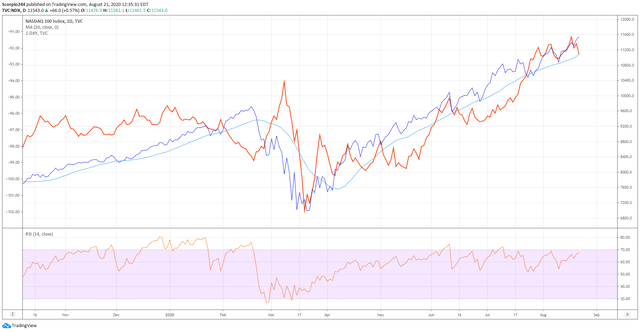 There is good reason to believe the dollar can strength, too, given the terrible PMI data in Europe today. The weaker recovery in Europe is causing the spread between US 10-Year yields and German 10-Year yields to widen again, after a massive contraction. Changes in that spread affect the direction of the dollar, and should the European economy suffer longer than the US economy, it would likely mean that spread shall widen further. It would result in a stronger value for the dollar vs. the euro, and other currencies, in the dollar basket. 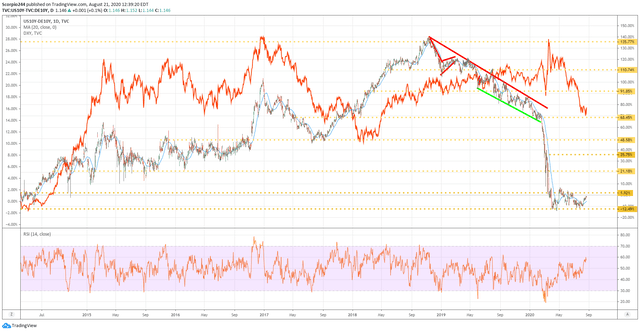 All of this is likely why, over the past ten days, there has been a tremendous amount of bearish betting in the options market. The September 18 $240 puts for the QQQ ETF have seen its open interest rise by around 62,000 contracts. Most of these contracts traded on August 6 and 7, on the ASK for between $2.40 and $2.70 per contract, meaning they were bought. It is a bet the NASDAQ 100 falls, with premiums paid of around $15 million. 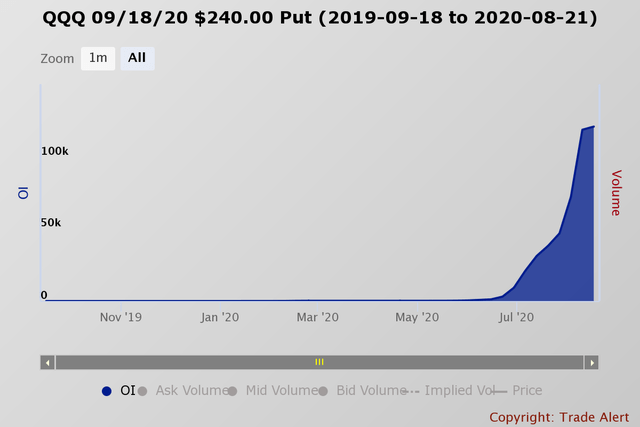 Some will point to the Fed and the tons of liquidity they have provided, which has been massive. But the problem is that the Fed’s balance sheet has stopped rising for some time now.

More interesting than that, notice how the Fed’s balance sheet has increased by around $2.7 trillion since March, to around $7 trillion. We see that nearly half that money was merely pushed on to the banks’ excess reserves at the Fed, and it is just sitting there, which now totals about $2.7 trillion.

Then, of course, there is a vast amount the US Treasury has on reserve at the Fed, at around $1.6 trillion.

Finally, there are the Federal Reserve notes, which account for another $2 trillion, which brings the total to around $6.3 trillion, among these three accounts.

What seems hard to figure out is that if all of that money is sitting in these three places, how is it that it is leaking into the stock market? It is a question that has escaped me and that I can not find a meaningful answer too.

Clearly, the momentum in the market is strong, but at the same time, the warning levels are all there. One can never be too cautious in this type of environment.

THE END OF WHERE WE BEGIN

25 of the Best Book Subscription Services of 2020

Love this article? Then hit the follow button at the top of the story!

Let The Market Be Your Guide

Finding the next big move in the market is never easy, so let us help you determine what that move will be. Every day, Reading The Market uses changes in fundamentals, technicals, and options markets to determine the next significant move in stocks, sectors, and indexes.

To Find Out More Visit Our Home Page

Disclosure: I am/we are long QQQ PUTS. I wrote this article myself, and it expresses my own opinions. I am not receiving compensation for it (other than from Seeking Alpha). I have no business relationship with any company whose stock is mentioned in this article.

Additional disclosure: Mott Capital Management, LLC is a registered investment adviser. Information presented is for educational purposes only and does not intend to make an offer or solicitation for the sale or purchase of any specific securities, investments, or investment strategies. Investments involve risk and, unless otherwise stated, are not guaranteed. Be sure to first consult with a qualified financial adviser and/or tax professional before implementing any strategy discussed herein. Upon request, the advisor will provide a list of all recommendations made during the past twelve months. Past performance is not indicative of future results.