A Review of Zener Diodes, the Component Spiking in Market Value

When an electrical engineer begins to study semiconductor devices, one of the first components we’re introduced to is the diode. Diodes are straightforward in their application and intuitive from a device physics level. Later, we’re introduced to a subcategory of diodes called the Zener diode, a diode that is meant to work in the opposite configuration of the standard diode.

According to Market Watch, the demand for Zener diodes is on the rise. In 2020, these devices are valued at 878.1 million USD, a figure that is expected to rise to 1067.6 million USD by 2026. From an engineering perspective, what about the Zener diode warrants this mounting demand?

In this article, we’ll define the Zener diode, why it’s needed, and its applications.

Standard Diodes and the Need For Zener Diodes

A standard diode is a device that, when correctly forward biased, forces current to flow in one direction. A special feature of a diode is that it will experience very little variation in its forward voltage drop for large changes in its forward current.

While this value of forward voltage drop varies, the commonly cited value is 0.7 V. Combined, these features give diodes great value in the design of power supplies and voltage regulators.

However, a problem arises when we want to regulate large voltages—when a 0.7 V drop isn’t sufficient.

Presumably, one solution might be to use a standard diode in reverse bias because in this configuration the device behaves similarly (regulating the applied voltage) but at much higher voltages (~50 V). The problem here is that a standard diode at its reverse bias breakdown voltage often breaks down destructively, rendering the component useless.

How Do Zener Diodes Work?

Enter the Zener diode: a diode that can handle reverse breakdown voltages without suffering damages. When forward biased, a Zener diode behaves very similarly to a normal diode, offering about a 0.7 V drop. 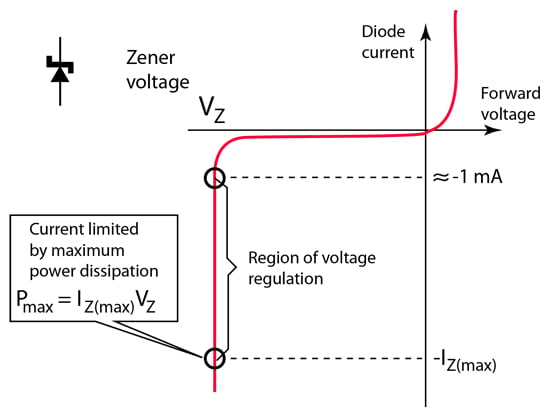 In reverse-bias mode, they do not conduct until the applied voltage reaches or exceeds the so-called Zener voltage, at which point the diode is able to conduct substantial current. In doing so, the Zener diode limits the voltage dropped across it to the Zener voltage point.

Applications for a Zener Diode

Given these characteristics, Zener diodes can be useful in many applications.

One popular application is a voltage regulator. In a simple circuit, like the one shown below, the load voltage equals breakdown voltage VZ of the diode. 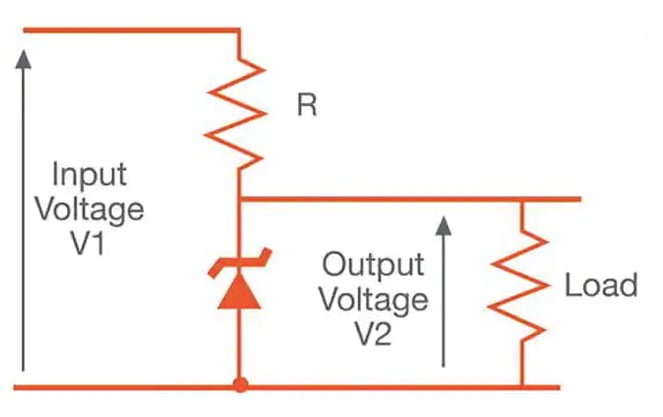 The series resistor limits the current through the diode and drops the excess voltage when the diode is conducting.

Furthermore, these devices find themselves useful in overvoltage protection circuits. In the circuit below, if the input voltage increases to a value higher than the Zener breakdown voltage, current flows through the diode and creates a voltage drop across the resistor. 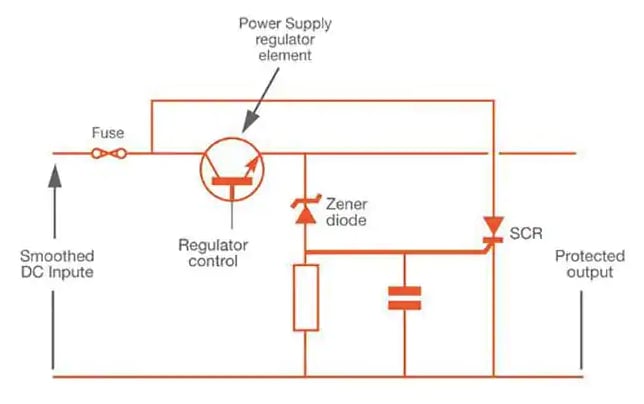 This triggers the SCR and essentially creates a short circuit to the ground, opening the fuse and disconnecting the load from the supply.

Have you recently designed circuits using Zener diodes? What other applications for them are out there? Share your insights in the comments section.

GBPUSD falls below the 200 hour MA. The run lower continues.