by Sig Ueland
in Business, News
0

Internet service providers offer online access with a variety of technologies, speeds, and prices. That means plenty of choices for consumers.

Here is a list of large ISPs in the U.S. These providers offer internet service through DSL, copper, fixed wireless, cable internet, and fiber. Prices and availability vary by location and are subject to change.

Xfinity is Comcast’s brand for consumer cable TV, internet, telephone, and wireless. Comcast is one of the largest cable providers, offering services to U.S. residential and commercial customers in 40 states. Xfinity’s gigabit internet is available to approximately 58 million homes and businesses. Xfinity offers a variety of download speeds ranging from 25 to 2,000 Mbps. Plans start with introductory pricing of $24.99 per month. Xfinity also offers no-contract plans for slightly higher monthly rates.

AT&T Internet offers high-speed service to 21 states. In addition to DSL broadband, AT&T Internet provides fiber and fixed wireless internet service. Internet plans start at $39.99 per month when bundled with other AT&T products, for download speeds up to 940 Mbps.

Verizon Fios (“Fiber Optic Service”) launched in 2005 as one of the first providers to offer fiber Internet services to residential customers. It’s available in 10 states along the East Coast for 35 million consumers. Verizon also offers residential DSL service. Plans start at $39.99 per month for 200 Mbps downloads and $79.99 per month for up to 904 Mbps.

Spectrum, from Charter Communications, offers internet services to more than 29 million customers in 41 states. Introduced in 2014, Spectrum provides a range of broadband and fiber services to residential and business customers. Plans start at $49.99 per month for 12 months with no data cap and download speeds up to 940 Mbps. 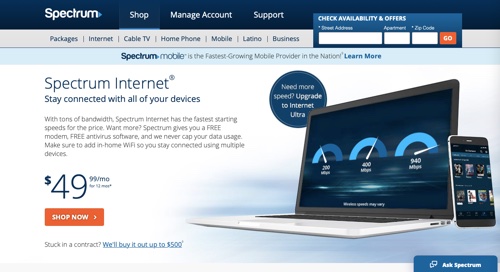 Frontier offers DSL and fiber internet plans in 29 states, primarily along the West Coast, Midwest, and South. It has no data caps and offers some of the most affordable options. Plans start at just $20 per month for 6 Mbps. The 940 Mbps plan is $74.99 per month.

Cox is the third-largest cable television provider in the U.S., serving 18 states with the highest concentration in Arizona and California. Cox offers cable TV, internet, and phone services. In addition to cable broadband, Cox also provides fiber internet service. Internet plans start at $29.99 per month for 10 Mbps. The 940 Mbps plan is $99.99 per month.

Suddenlink, a cable provider, offers internet, cable TV, and phone services across 19 states, primarily in the South and Southwest. Suddenlink offers fiber and cable broadband internet. Suddenlink does not require contracts but does use promotional pricing. Plans start at $35 for 50 Mbps. The 940 Mbps plan is $80 per month.

Sparklight, formerly Cable One, offers internet, cable TV, and telephone service in 19 states, mainly in the Midwest and Northwest. It is the ninth-largest U.S. cable provider, available to approximately 3 million people. Plans start at $39 per month for 100 Mbps. The 1,000 Mbps plan is $125 per month with a 1,500 GB data cap.

Mediacom launched in 1995 to bring advanced TV, internet, and phone services to America’s smaller cities and towns. It’s the fifth-largest cable provider and offers services in 22 states, with the most extensive coverage in the Midwest. Plans start at $39.99 per month for 60 Mbps. The 1,000 Mbps plan is $79.99 per month with a 6,000 GB data cap. 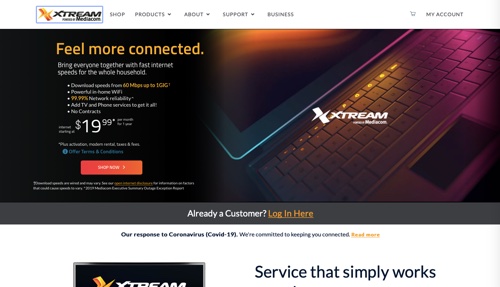 Windstream offers DSL, copper, fixed wireless, fiber, and cable internet services. Windstream’s DSL service is available in 50 states, but its Kinetic hybrid fiber-DSL service is available in 18 states. Windstream does not require contracts and does not have data caps, but prices do increase after the first promotional year. Kinetic plans start at $55 for 100 Mbps. The 1,000 Mbps plan is $75 per month.

WOW provides cable, fiber, and DSL internet access across 10 states in the Central and Southeast regions. WOW offers plans with no data caps and no contracts. Plans start at $39.99 per month for 100 Mbps. The 1,000 Mbps plan is $74.99 per month.

Optimum, from Altice, offers cable and fiber internet services to four states: Connecticut, New Jersey, New York, and Pennsylvania. Optimum does not require contracts and provides pricing for life. Plans start at $40 per month for 300 Mbps. The 940 Mbps plan is $75 per month. 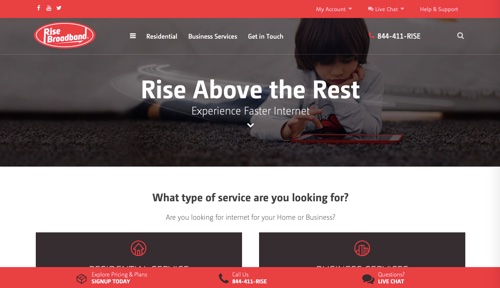 Google Fiber, part of the Access division of Alphabet, is a fiber-optic broadband service in 19 cities across the U.S. Google Fiber offers 1 Gbps downloads and uploads, with no data caps and no annual contracts. The price is $70 per month.

HughesNet, a subsidiary of EchoStar, provides satellite internet access to over 1 million subscribers in all 50 states and is a good alternative for rural consumers. Beginning in 2016, HughesNet expanded into South America, including Brazil, Columbia, Peru, and Ecuador. HughesNet requires a two-year contract. Plans range from $59.99 to $149.99 per month, offering 25 Mbps downloads and up to 50 GB data cap.

Viasat is another satellite Internet provider that may be an attractive option for rural areas without fiber, cable, or DSL. Viasat offers download speeds up to 100 Mbps and requires a two-year contract. Plans start at $50 per month with a 25 GB data cap. 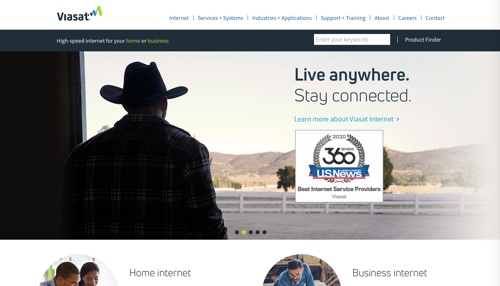 What happens when an algorithm gets it wrong